The Soul of a Drummer and A Review of Whiplash 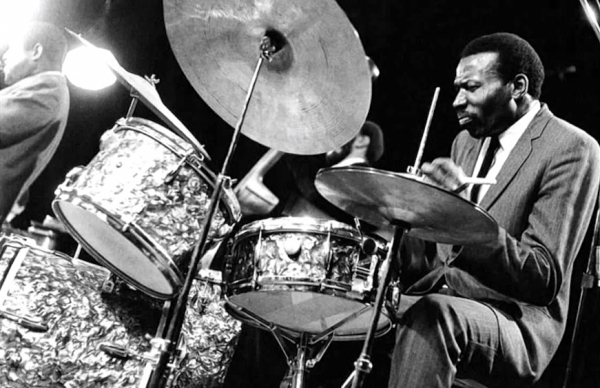 The drummer is the backbone to any band, from jazz to rock, for they are the ones that make the melody pulsate, the harmony throb and the bass notes dance. Without a good drummer then the band is no good, it is that simple.

However, fools often say, ‘What Do You Call a Guy Who Hangs Around with Musicians? A Drummer’, yea right…Led Zeppelin, without the powerful pounding of John Bonham, probably would not have had that formidable Hammer of the Gods sound. Elvin Jones gave John Coltrane’s saxophone that swing. Would Paul Weller’s songs in The Jam and The Style Council be so distinctive and impressive without Rick Buckler and Steve White respectively, behind the kit? Clem Burke beating of the skins made Blondie come alive, Metallica would have stayed as a garage band without the drive and drumming of Lars Ulrich. Buddy Rich set the bar in the world of jazz. Clyde Austin Stubblefield the original Funky Drummer. The list is endless and timeless about what drummers have given to the world of music. 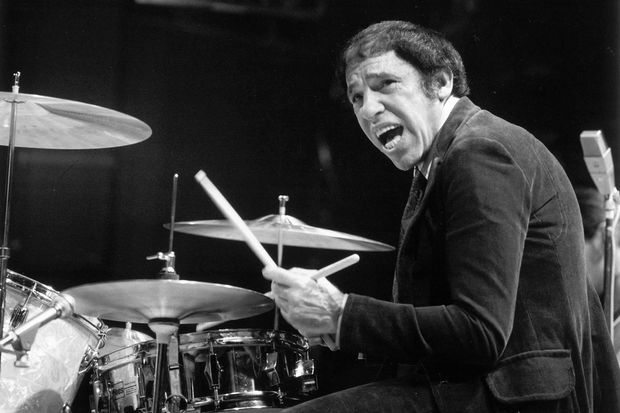 Behind the stage smile of every musician from keyboard to the trumpet player, there is a foundation and a purpose that drives this individual to create music. Moreover, the psychology in the innovation and dedication of being a musician is the key foundation for Director Damien Chazelle’s film (La La Land, First Man) Whiplash 2014.

Whiplash tells the story of a young, naïve, yet arrogant and talented drummer, Andrew Neiman (Miles Teller - War Dogs, Too Old to Die Young) and the ruthless tutor and bandleader Terence Fletcher ( J. K. Simmons, the man born to play J. Jonah Jameson in Spiderman, Oz, The Closer) at the fictitious school of music, Shaffer Conservatory in New York City. Furthermore, the pinnacle of any student’s education at the establishment is to be a member of Fletcher’s Shaffer Conservatory Studio Band, a modern jazz outfit. Getting in this band is hard enough, but getting on with Fletcher is even harder, for he is notorious for his cruel and demanding teaching methods. 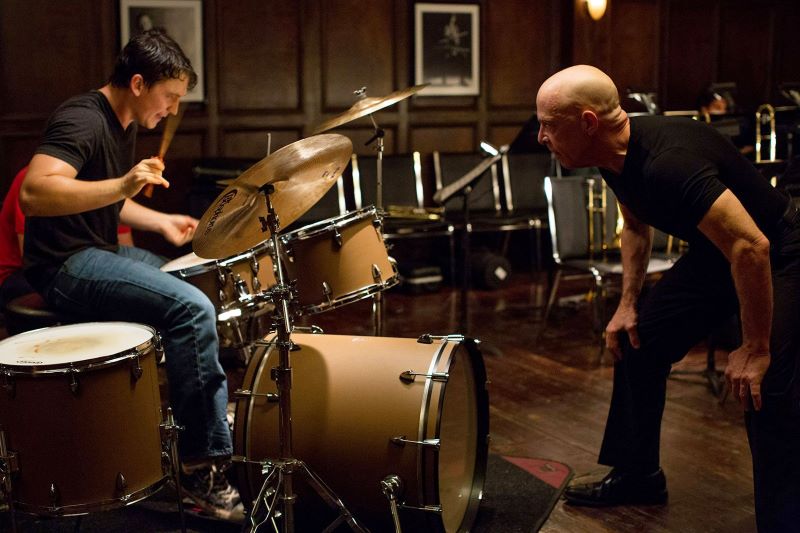 Andrew Neiman, socially shy, as his only social outlet is to go to the cinema with his father, a single parent (Paul Reiser: Mad About You, Aliens), where Andrew meets the only love interest in Whiplash, Nicole, ( Melissa Benoist: Supergirl, Patriots Day), an usher at the cinema. Sweet Nicole agrees to go on a date with Andrew on the same day that he has been accepted by Fletcher to be the backup drummer to the main drummer, Carl Tanner (Nate Lang: Drunk Wedding, What Maisie Knew). For Andrew Neiman life seems to be on the up.

Yet for Neiman to fulfill his ambition to be his generation’s Buddy Rich and to appease Fletcher, it is going to be a tough journey, and to quote dance tutor Lydia Grant (Debbie Allen: Amistad, Grey's Anatomy) at the start of the TV series Fame (1982 -1987) ‘You’ve got big dreams? You want fame? Well, fame costs. And right here is where you start paying … in sweat.’ Neiman quickly learns that it is not just sweat but also blood and tears. 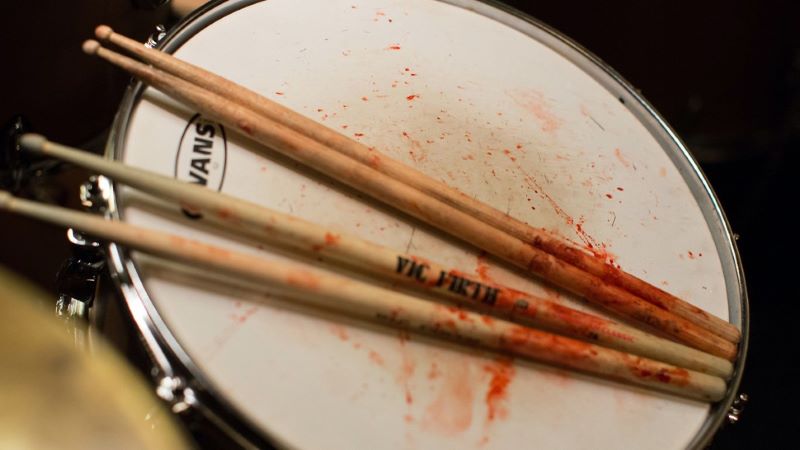 After failing to keep time whilst playing the drums for the song Whiplash (written by renowned jazz composer Hank Levy) at a rehearsal with Shaffer Conservatory Studio Band, Neiman feels the full wrath of Fletcher’s rage and cruelty, which reduces Neiman to tears in front of his other fellow band members. This is the start of psychological warfare between Neiman and Fletcher, will there be only one winner, or will there be a compromise?

Whiplash is an emotional and psychological drama, based on Chazelle’s experience of being in a jazz band and the bandleader. Originally intended to be a psychological thriller yet moved to a drama. However, there are echoes of a thriller, as the relationship between Neiman and Fletcher is cat and mouse, as both are determined to outsmart the other.

Miles Teller gives a convincing and engaging execution as the nice kid, who becomes a young man on a mission. Miles’ skills as a drummer certainly came in useful in the making of Whiplash. 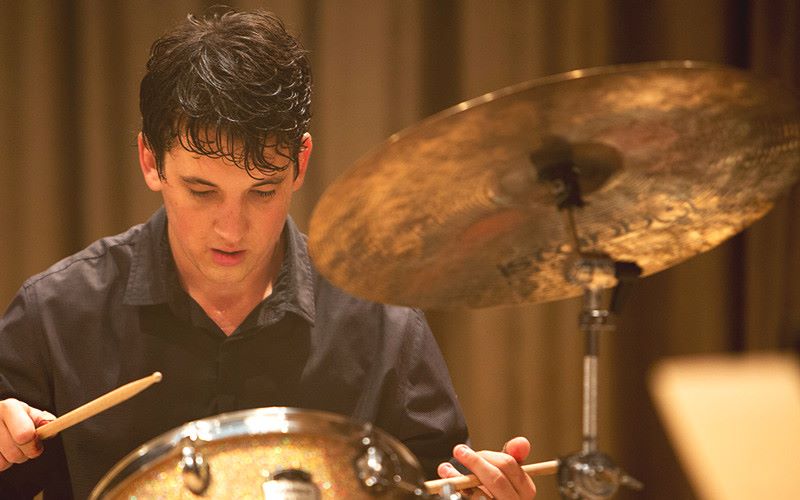 J. K. Simmons, who rightfully won an academy award for best-supporting actor in Whiplash, gives a mean and moody performance as Fletcher, a man who never shows any warmth or tenderness to any living soul. Fletcher could easily be the distant cousin of the ferocious and vindictive white supremacist Vernon Schillinger from HBO’s prison drama Oz. The character Schillinger, performed to perfection by Simmons, should serve as a warning to any kid in the USA not to break the law, because if you do then you are bound to have the unfortunate pleasure of meeting a Schillinger in a state penitentiary. The first time I watched Oz with Simmons, I had nightmares that night.

Whiplash moves around like a piece of jazz music, the mood changes within a beat, spellbinding, energetic and unforgettable viewing, that will leave a lasting impression on you, just like Hank Levy’s Whiplash. You don’t have to be a fan of jazz, nor be a drummer to enjoy Whiplash. Any fans of good films that are character-driven with strong and intelligent plots, will enjoy this film too.

Out now on Sky cinema.