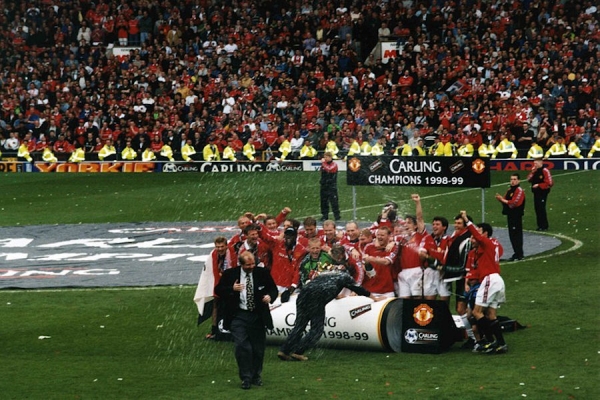 This year is special for Manchester United fans as it marks the 20th anniversary of the club's historic treble-winning season when they won the Premier League, the FA Cup, and the Champions League. It was a season to remember and here's a look back at that magical run.


Like the season before, United found themselves neck and neck with Arsenal for the Premier League title. United secured the title in their final match against Tottenham after needing a win to be crowned champions. In what would turn out to be an overriding theme for United’s season, they stormed back from a one-goal deficit to secure the win, and lift the Premier League trophy. David Beckham equalised just before halftime, and Andy Cole completed the comeback with a delicate lob in the 48th minute.

In the FA Cup, United met a familiar foe in the semi-final in the form of the Gunners. The first match ended in a 0-0 draw, leading to a replay four days later. And it was a classic. Beckham opened the scoring, but Arsenal managed to equalise through Dennis Bergkamp’s deflected shot. United’s dream almost collapsed in injury time after Philip Neville gave away a penalty. Schmeichel’s nail-biting save set the stage for Ryan Giggs’ magical match-winning goal in extra time.

United faced Newcastle in the FA Cup final, where team captain Roy Keane limped off in the 8th minute. His replacement, Teddy Sheringham, proved up to the challenge, putting United ahead 11 minutes into the match. It was a lead they would not relinquish, and Paul Scholes added another goal in the 52nd minute. The midfielder was a key that season, as he was United’s “most consistent player United won 2-0 and picked up trophy number two.

There was no shortage of classics in United’s treble-winning season. But their final match versus Bayern Munich in the UEFA Champions League is arguably at the top of the list. United came into the match missing two key men, with both Keane and Scholes suspended after each had received two yellow cards in the tournament. United got off to the worst possible start when Mario Basler scored a free kick in the 6th minute. 1-0 down with three minutes left on the clock it looked like a dream too far. Then the Manchester miracle started unfolding. United equalised in the 91st minute courtesy of a Sheringham goal and extra time loomed. Ole Gunnar Solskjær, United’s super-sub, and now the current manager, scored the winner in the 93rd minute when he stuck his boot out and directed the ball into the top of Bayern Munich’s goal. Just like that, a most improbable comeback was completed. The treble had been won.

That memorable treble is now a distant memory. United are a very different team and have been underperforming since Ferguson retired in 2013. A repeat of the treble this season is almost out of the question, despite United being in all three competitions. Their poor start to the season has left them 16 points behind Liverpool at the top. Instead they will focus on the double – the FA Cup and Champions League. Unsurprisingly, United are not one of the favourites to win the Champions League, with bwin giving the club odds of 29.00, compared to Manchester City's 4.50 and Barcelona's 5.75. Those figures show the current gap between United and their rivals. Then again, things have started looking up for United since Solskjær took over from José Mourinho, and they have won all of their games under the Norwegian so far. So, maybe there’s a chance after all.

Ultimately, it’s worth remembering that this is United, one of the biggest clubs in the world. They proved they could comeback from insurmountable odds 20 years ago, and there’s no reason they can’t do it again 20 years later. Could this season be another Manchester miracle?

United in action at this season's Premier League