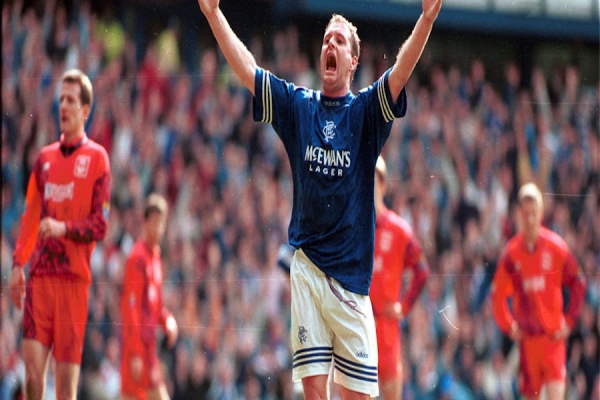 Gazza was a god on the pitch and a hero to millions during an era of total domination for Rangers. This article needs no research on Wikipedia or copy and paste quotes from articles unrelated to football by lazy mainstream journalists who’re only interested in sensationalism. Nobody is perfect, but on the pitch Gazza was up there with the very best. Maradona, Zidane, Messi, on his day Gazza was every bit as good as these three.

His generosity and love of practical jokes are legendary and during his time in Glasgow his personality fitted in perfectly in a team full of legends and similar characters. Tricked into playing an imaginary flute as soon as he arrived in a pre season game, shown a yellow card for booking an absolute dickhead of a referee after he dropped his cards on the Ibrox pitch. Gazza’s Rangers career was full of highlights, mostly highs and a few lows but one game will forever be remembered in the history of our club. Aberdeen at Ibrox as we were going for our eighth title in a row.

They had a half decent team but to be honest their best team under Sir Alex Ferguson would have been outclassed that day. I travelled on the Kirkcaldy Central Fife bus full of legendary characters like Big Rab Munro the West Enclosure madman, Geordie Smart and big Andy Graham likewise mad fuckers from Kirkcaldy. My Dad travelled through on the Cardenden Loyal bus with all his mates, older boys who I’d travelled through with as a young kid. Wee Radar, mad Peggy and even madder Jimmy Watson. Jimmy almost left me stranded one time away to Dundee United at tannadice when I was ten years old, as he almost got arrested for arguing with a policeman during the match.

We bought our season tickets for the Copland Road Rear in 1985 , the season before The Magnificent Bastard Souness arrived. Row E seats 55 and 56. Beside me five rows up were two of the staunchest boys I’ve ever met from Glasgow who we both knew as Big Man. The irony being both of them were under 5ft 8. My Dad sat beside me with David Shields, a young Dundonald boy a further seat in.

Aberdeen had the cheek to take an early lead before Gazza took a grip of the game and turned it into his show. Equalising from a tight angle after a mazy run the first half ended 1-1. The second half was inevitable as there was no way they were preventing us from 8 in a row. Gazza’s second summed him up perfectly as he picked the ball up in midfield and used his burst of pace to carve half his opponents team up as he went through them like a hot knife in butter. As the forwards created space by taking the defenders wide we knew he was scoring. By the time the ball hit the back of the net I’d joined about fifty other delirious fans at the front row near the exit. By the time I got back to my seat beside my dad he casually mentioned he’d fell and hurt himself on the steps. As Gazza clinched the title with his hat-trick Dad couldn’t even celebrate as the pain got worse.

Trying to hide the obvious pain he was in as our buses arrived back at The Auld Hoose in Bowhill, he ordered his usual 1/2 pint of Pale Ale and Vodka and coke. He couldn’t even finish them as he left half an hour after arriving. I left soon after him and by the time I got home my Mum had phoned an ambulance. My Dad being a proud Glaswegian with a reputation for being a hard man protested stubbornly. ‘ I’ll be fine in the morning ‘ he said. He was far from fine as he’d broken four ribs and punctured his lung which then collapsed. He ended up spending a week in the Queen Margaret in Dunfermline. With my mum at his bedside and several visits from his mates from the Cardenden Loyal he eventually recovered.

As Gazza sliced through the Aberdeen team and clinched 8 my Dad celebrated with young Shieldsy, they both fell on the deck in the mad celebration. A scene I’d witnessed several times as the chaotic celebrations ( especially at old firm games ) made it every man for himself. An accident that young Shieldsy found hard to accept, blaming himself for hospitalising my Dad. He visited my Dad with his Mum Maureen and was full of remorse for almost the whole of the next season. Apologies all season for an accident that wasn’t his fault.

When Dad finally got out of the hospital we were able to watch the match highlights, and the moment the ball hit the back of the net for Gazza’s second my Dad turned to me and said ‘ 1,2,3 crack, four broken ribs and a punctured lung. Mon the Gazza! ‘ We’ve watched this game hundreds of times and every time he says the same thing. 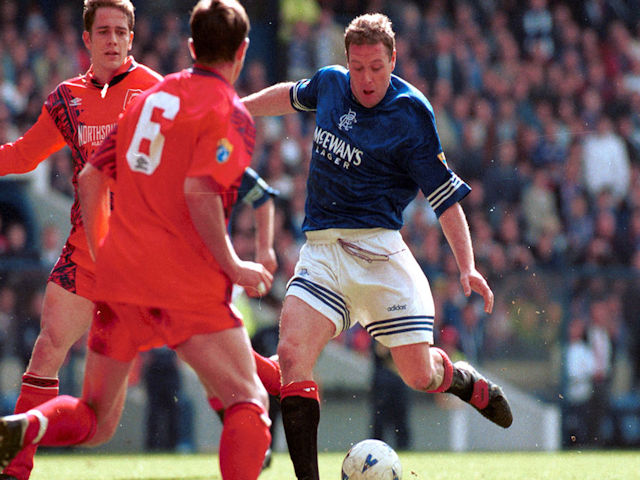 With no social media back then and the worry of seeing my Dad in hospital again after several unrelated previous operations, my Dad’s unfortunate accident never made headlines. If news had filtered back to the squad I’m sure Gazza would have turned up in his training kit with the whole team just to cheer him up.

Gazza, on behalf of myself, my Dad and every Rangers fan I know. Thank you. Legend!

This article is dedicated to the memory of young Shieldsy RIP