Adidas – Shoes for the Elite 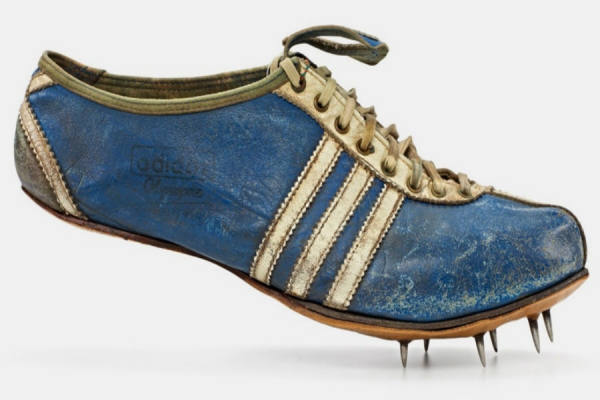 The company have come a long way from their origins in Germany when Adi Dassler made his first pair of canvas trainers on the kitchen table in 1920.

The shoe making brothers were dedicated to produce quality and durable footwear that met the needs of the sportsperson as well as protect them from injury. Dassler’s sports shoes soon found favour with the elite athletes.

In 1925 he invented screw-in studs for soccer shoes and spiked running shoes which took off and soon Adi Dassler was making different shoes for the different athletic events using all manner of materials to reduce the weight of his shoes. It was the 1928 Olympics in Amsterdam that first saw athletes wearing Dassler’s shoes. The debut of adidas products in the Olympic stage was an immediate success, with Karoline ‘Lina’ Radke-Batschauer wearing adidas spikes, winning gold in the first ever women's 800-meter competition in world record time.

In 1932 Arthur Jonath took bronze in the 100 m wearing Dassler’s shoes in Los Angles. It was the 1936 Olympics (Berlin) when Jesse Owens wore Dassler’s hand made spikes in his record breaking performances at the Berlin Olympics that would eventually make the association and established the need for dedicated sport shoes. In the ensuing Olympiads records fell with the elite athletes wearing adidas shoes. In 1948, Emil ``Czech Locomotive," Zatopek ran to gold in the 10,000m and Silver in the 5,000m wearing Dassler's lightweight shoes. In the same year, ``adidas'' was registered as the brand with the ``Three Stripes." The adidas sports bag was introduced in 1952 and the company started to be promoted at the Melbourne Olympics in 1956.

In 1960 the company introduced the adidas Rom training shoe to commemorate the Olympic Games in Rome and the shoes became an evergreen life style seller. At the 1964 Tokyo Olympics, 80%of all the athletes wore the three-stripe shoes. At the games the "Tokyo 64" was launched as the lightest sports shoe weighing just 135 grams. The trifoil apparel became available in 1967 and a year later adidas was the first company in the world to produce injection-moulded multi-stud soles of polyurethane. To match the jogging craze adidas released the "Achill" jogging shoe. In 1972 Munich, the adidas trefoil logo was launched and Heide Rosendahl was a regular tester for adidas and proved her versatility by winning the women's long jump gold, the silver in the pentathlon, and another gold with the 4x100m Relay. New adidas products included the ``suction cup'' outsole pattern and the wrapped edges of sprint spikes.

At Seoul (1988) Steffi Graf defeated Gabriela Sabatini in the female tennis final wearing adidas shoes. By the Summer Games in Los Angeles, 124 out of 140 nations competed in adidas attire with 259 medals won in products with the Three Stripes. In Sydney (2000) adidas represented 26 of the 28 sports and more than 3,000 athletes wore adidas attire. The succuss of the games in Sydney left adidas-Salomon´s sales with a new record level in 2000 reaching € 5.8 billion. adidas was the official sportswear partner of the Beijing Olympics and provided its products to over 3,000 athletes, 16 National Olympic Committees (NOCs), 214 country federations, and roughly 100,000 volunteers and competition staff. This included the provision of over 500,000 units of sporting equipment, including 43 different types of shoes.