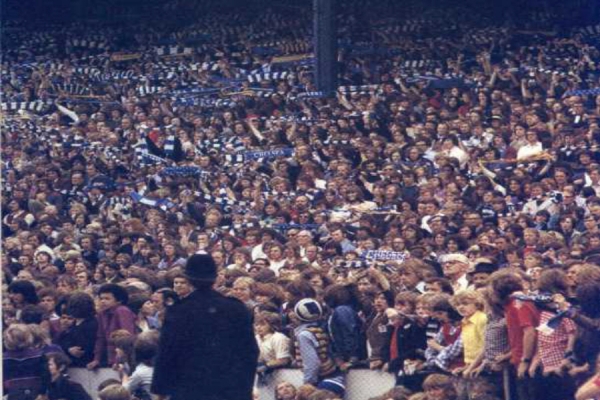 28 Bus down the Kilburn High Rd, through the concrete of Paddington, under the Westway, looking down at the antiques in Notting Hill, past Biba and the crowds in Kensington High St, Olympia passes on the right and its a big swing left into the North End Rd, trundle on and past the Nashville at Talgarth and down towards the North End Rd market.

Right here we go, grab the rail and half slide the stairs from the top deck in one expert and well practiced gliding movement, hanging off the platform of the bus in front of a disinterested conductor doing something with the ticket machine round his neck. Now we’re at a snails pace, oh when to jump off , be quicker to walk would it? certainly be quicker to run, looking for a gap, here comes one and I jump perfectly into the fruit stall and grab the biggest greenest apple and 'kin leg it, HA HA HA, here we go, my hair is down to my waist, silk scarves are flying in the breeze, red and green on one wrist and blue and silver on the other, perfectly synchronized colours, what with my black and white star pattern twin cardigan and tank top set over my purple rounded collar shirt, green flared high waisters rolled up over high leg Dr Martens laced in red …..… What a Lad ! Yeah. In fact Its Ad The Lad, that's what they call me round my way; Ad the Lad. 'Ad the Lad he's Chelsea Mad'. 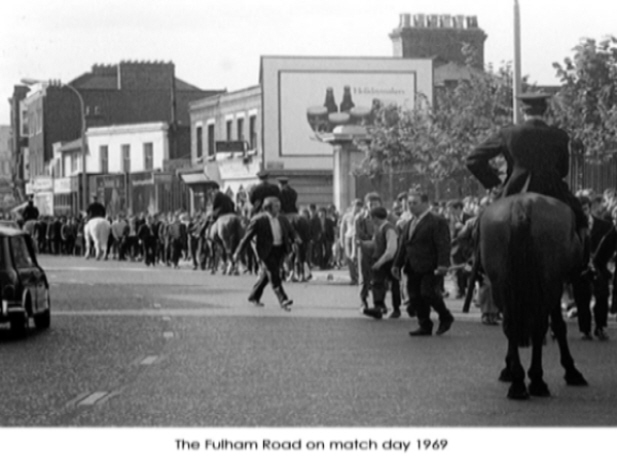 An hour ago I'd dashed past my Mum and Dad on my way out shouting ' I'm off, see ya back for tea' last thing I caught as I slammed the door was my Mum looking at my Dad and saying 'don't worry its just a phase' and my Dad just shaking his head in a completely uncomprehending state of bewilderment 'but look at him'!

Now I'm getting down towards the bottom of the road still munching on my prize Granny Smith and the crowds are really gathering together, at my height all is hair, all is parka coats and flares, scarves, hats and rosettes, blue and white, blue and yellow, red and green. Thousands are now joining the throng pouring out of Fulham Broadway station, all heading the same way up the Fulham Road past the café, the chippy and the newsagents, past the old boys selling badges, rosettes, scarves, tearly editions of the Evening Standard and Evening News. Now I'm up to the North Stand gates, are there many of their mob about? doubt it, one or two stragglers maybe but they're well outnumbered by the dark blue police uniformed welcoming committee, past the West gates and here we go, turn left down the alley at the Bovril Gate, its busy today alright, gonna be packed, just as well I'm early it'll lock out for sure, it's a big queue but bollocks to that, not for me it aint, hug the wall to the left, keep going, pushing, winding and bending past giants that smell of Armani, sheepskin and leather, some of them singing, some swearing, most laughing at their mates jokes or taking the piss out of each other or out of strangers in the crowd, some pushing and swaying, all massively excited. 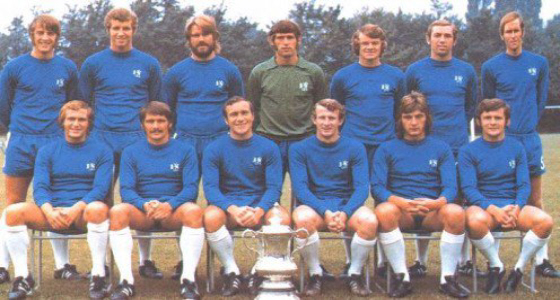 Keep going, face scraping against the rough brick, I get to the end of the wall and pop round the corner, HA I knew it, no queue round there not one person at the 2 ‘Boys’ gates furthest to the left, find the money in my side pockets, and pay my 10 bob to the ancient boy in his white coat, with his gnarled old face behind the grid, push as hard as I can on the turnstile ‘PUSH HARDER BOY’ he shouts and I'm in - YES.!  Here are the steps, quick get a programme at the bottom from the young lad about my age whose clutching a bundle of them to his chest with one hand and with the other fishing for change in his brown money satchel, meanwhile I can't help constantly glancing up to the light and the bright blue sky at the top of the tunnel. Right got it, off past the toilets on my left and bound the stairs in 2 's up, up, …….my heart is thumping……… and………

YES YES YES YES - STAMFORD BRIDGE! - Yes, here I am again just like I am every second Saturday, on my own, an independent 14 year old, but this is MY place, I don't go with friends or family, Its mine, I go on my own but friends are here alright, I don't know any of them by name but I'm surrounded by friends, thousands of them. It's an enormous great arena, bright blue sky, the greenest green grass in the middle with bold straight newly painted white lines on the turf. White goalposts with white netting at each end, 6 blue corner flags and all of it surrounded by the bright red cinder track. The West and East stands either side are almost empty with only a few early birds taking their seats, the rickety North Stand has a few more in it by now but the enormous Shed terrace is filling quickly especially under the roof, on the track behind the goal a few light- blue 3 wheel disabled cars are parking up. 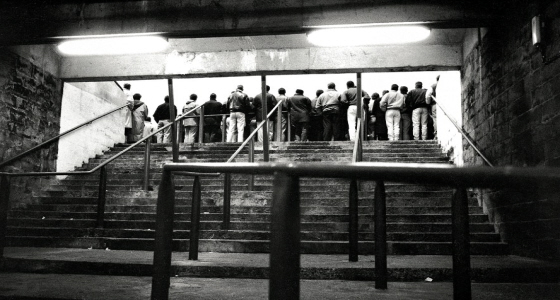 First the ritual is to have a look at the other end ' How many have they brought with 'em? blimey, loads, they got here early. Right time to move in with the crowd now, I head backwards and upwards past the Tea Bar crowd, usual faces hanging about, a few skins, Crombies with red handkerchiefs showing, Harringtons, Ben Sherman, Stapress and Loafers or DMs, avoid eye contact over here is wise. Now I am heading just under the roof with my hand running along the back blue corrugated metal of the shed and the pebble-dashed wall, I stop there for a moment to pose, leaning on the wall and get out my packet of ten 'No6' and my book of matches, I try to look hard and act cool while looking at my programme and getting dizzy puffing on my fag. OK time to stake my place, there is no singing yet but it's getting busier and louder under the roof because the sound is magnified enormously.

The last gangway from the end and this is my spot, I'm in, I head only 4 or 5 steps down and then duck under the barrier to my left, a bit of jostling and pushing for space and I'm in, YES, I need to move 4 or 5 feet to my left so the pillar isn't obscuring the middle of the goal and now because the Shed isn't in the middle of the pitch but strangely angled and slightly to the east of centre it means I'm almost directly behind the goal, I can see the away support and Ive got a perfect view of the game ahead.  The singing starts and I know all the words, 'I was born under the Chelsea Shed', 'When the red red robin goes bob bob bobbing along' ' Knees Up Mother Brown', oh my what a rotten song and it's a big surge from the back that picks you up and takes you forward whether you like it or not and many of us fall, but never fear as the crowd sways back up, just grab onto anything you can, there's plenty of hands pulling you up, the coppers pick out a few unlucky ones at random. ' Harry Roberts is our friend' we sing but its interrupted by the beautiful sound of ‘The Liquidator’ starting up from the tannoy and we're singing and clapping along with Chelsea's famous anthem as the teams come out.

As always at every home game we sing through the names of the team, each has his individual chant and every one of them waves as his name is called, Bonetti is the best keeper in the world, and there he is in front of us catching the ball and rolling it back to teammates to fire practice shots at him, green shirt and blue shorts with a No1 on his back with his thin green 'Peter Bonetti Gloves', the pairs of them I went through down the park I cant tell ya.  Chopper the captain, The Sponge, Ossie, Mary, Olly, Charlie Cooke, Hutch, Boylers, Marvin Hinton, Eddie Mac and the Cat. We love 'em all, my mum always says when were watching Match of the Day of a Saturday night long after teas been put away  ' y'know they're such lovely looking boys, much nicer than that Tottenham lot', hard to argue when they've got Gilzean, Coates, England, Mackay, and the likes playing for 'em.  Lining up for kick off in our royal blue shirts, our badge a proud rampant white lion holding a red staff, royal blue shorts with a white band down each side and each players number on his thigh, blue socks and black boots. Now the whole ground is completely full, we’re singing and clapping along; CHEL-SEA -clap clap clap, CHEL-SEA - clap clap clap, the bloke in front of me is wearing a pork pie hat and a full length white butchers coat with CFC Battersea written in big blue letters above the lions crest on his back, someone's dropped a fag in his turn-up and I'm beginning to smell the material burn. The ref blows his whistle, the noise is deafening, smell the smell, taste the atmosphere, home again. 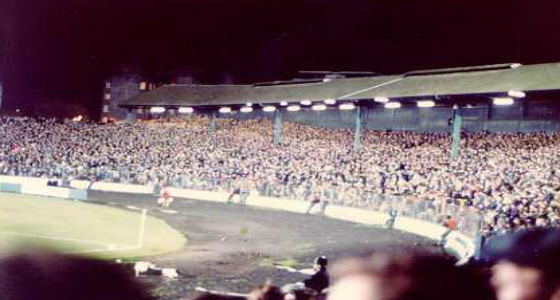