SV Hamburg and VfB Stuttgart: Back in the Day Part One of Two 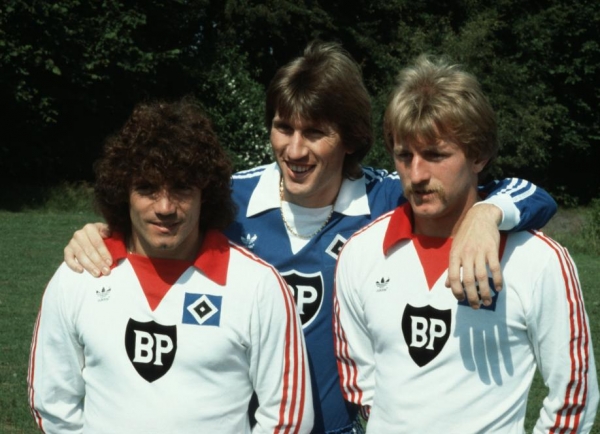 The near double relegation of SV Hamburg and VfB Stuttgart this past season took my memories back to more than thirty years earlier when both teams left an indelible mark on me as a new Football fan.

The teams from the opposite poles of the Nation (Hamburg-North, Stuttgart-South) were then perennial powers in the West German Bundesliga. In case of Hamburg, they were a force in the European Stage as well.The days when the likes of Magath, Hrubesch, Keegan and Kaltz starred for Hamburg with ‘Hitachi’ and ‘BP’ emblazoned across their shirts.Similarly an exciting Stuttgart team exemplified by the youth of Hansi Muller and the Förster brothers were giving the big guns a run for their money. For most of the 1970s, Bayern Munich and Borussia Moenchengladbach dominated the West German Football landscape with most teams such as Hamburg and Stuttgart unable to reach the same standards.The fortunes of Hamburg changed when Peter Krohn became General Manager on April 23, 1973. The flamboyant and ambitious Krohn wanted to make Hamburg a force in German Football.

However, success would take a few years to achieve for Hamburg (Stuttgart as well).The well-respected Kuno Klotzer was appointed as Hamburg manager in 1973. After a mid-table finish in 1973/74, Hamburg showed improvement in 1974/75 (4th place) and 1975/76 (Runner-up) and won the West German Cup (DfB Pokal) (1975/76).VfB Stuttgart fared worse during this time and were relegated at the end of the 1974/75 season and would remain in the Second Division for the next two seasons.For the 1976/77 season, despite a relatively poorer campaign (6th place), SV Hamburg were triumphant in the Cup Winners Cup by defeating Anderlecht.This off-season of the year 1977 became a pivotal date for both teams, as Stuttgart was also promoted back to the Bundesliga.It was during this summer that Peter Krohn made the play to take Hamburg to the next level. He sanctioned the purchase of England’s Kevin Keegan from Liverpool for 500,000 British Pounds, which was a record for a Bundesliga side. In addition Yugoslavian defender Ivan Buljan arrived from Hajduk Split. This duo replaced ageing foreign players: the Danish Ole Bjørnmose and Austrian Hans Ettmayer. 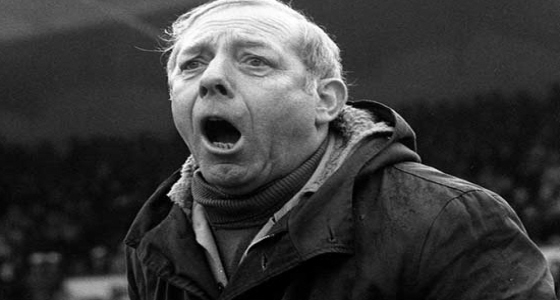 Keegan’s fee had been too much for both Bayern Munich and Borussia Moenchengladbach, but Hamburg had to pay on its profits to avoid a large tax.During the previous season, Krohn had already informed Kuno Klotzer that he would be relieved of his duties at the end of the season.Most of the squad was against this decision, as Klotzer was well regarded. Klotzer and Krohn had many clashes during their time together. For the Press, Klotzer was too old school to be able to have a meaningful working relationship with a dynamic General Manager like Krohn.Krohn appointed the globetrotting German manager Rudi Gutendorf in this summer of 1977.The showman Krohn declared that he intended to revolutionize German Football.

Krohn had balanced the books by among other things being at the forefront of Shirt Advertisement for teams. Hamburg were able to rake in extra funds from Japanese Firm ‘Hitachi’ by having them as shirt sponsors.The new signings joined a team that included Rudi Kargus (goalkeeper), Manfred Kaltz, Peter Nogly, Peter Hidien, Capar Memmering, Felix Magath, Willi Reinmann and Georg Volkert.Not much was expected from the newly promoted Stuttgart side, however, they would take Bundesliga by storm by finishing in the Fourth place for the 1977/78 season.The team included Helmut Roleder (goalkeeper), Karlheinz Förster, Yugoslav defender Dragan Holcer, Bernd Martin, Hermann Ohlicher, Erwin Hadewicz, Hansi Muller, Austria’s Roland Hattenberger, Dieter Hoeness (brother of Bayern’s Uli), Walter Kelsch and Ottmar Hitzfled (nearing the end of his career).

By the end of the season, the midfield organizer Hansi Muller and Stopper Karlheinz Foerster earned International honors and were earmarked as the future of West German Football. Stuttgart also turned out to be the best-supported team in the Bundesliga, which was a benefit to them, as the players’ earnings were directly linked to attendance.Their young Manager Jurgen Sundermann was seen as one to watch for the future.Despite all the pre-season promise, SV Hamburg had a poor season (1977/78). Keegan was disappointing and was considered an expensive flop. In his very poor first season, Keegan was also suspended for eight weeks for punching an opponent.On October 28th, 1977, Rudi Gutendorf took a leave of absence and his assistant Ozcan Arkoc took over (and actually improved matters on the field).Many were critical of Krohn for signing Keegan and Buljan and disrupt the team unity that had been built. Keegan even stated that his teammates cold-shouldered him and would freeze him out during matches. 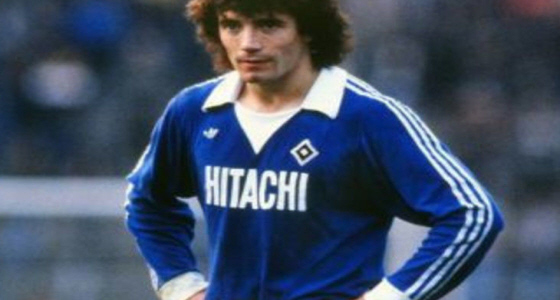 With his gamble and plans seemingly in ruin, Krohn also resigned from his position as General Manager. This event would actually turn out to be the catalyst that Hamburg needed.Former Borussia Moenchengladbach and Real Madrid midfielder Gunther Netzer had retired at the end of the previous season. He was appointed as the new General Manager and started in his new post on February 8th, 1978.Due to his difficulties in adapting, many tipped Keegan would be sold, but Netzer chose to hold onto him. Some time later, Netzer remarked in an interview that his initial difficulties at Real Madrid paralleled Keegan’s; as a result he chose to be patient with him.For his first full season as General Manager (1978/79), Netzer appointed Yugoslav Branko Zebec as manager.He also transferred out Arno Steffenhagen and Georg Volkert, whom he perceived were not playing for Keegan and were troublemakers.The new signings included midfielder William ‘Jimmy’ Hartwig (TSV Munich 1860), as well as strikers Horst Hrubesch (Rot-Weiss Essen), Bernd Wehmeyer (Hannover) and Hans-Gunther Plucken (Union Solingen).Branko Zebec brought stability to the team and won the Bundesliga title with a re-energized Keegan. Keegan had become an integral part of the team and managed to score 16 goals.

His problems were mostly off the field as he angered the German media by refusing to grant interviews. He was reluctant due to the language barrier, as well as his contract with an English Sunday Newspaper. After a number of stories still suggesting that he was not integrating, he wrote an open letter to Kicker Sportsmagazin and asked the Sports Journalists to leave him in peace and just write about his football.But nonetheless his stark improvement led him to extend his contract by one more year.As far as Stuttgart, the previous season’s exploits had not gone unnoticed and on December 1978, Kicker Sportsmagazin named Jurgen Sundermann manager of the year. Their new arrivals that season were Hamburg’s discarded Volkert as well Karlheinz Förster’s brother Bernd, who arrived from Saarbrucken.They actually improved from the previous season and were Hamburg’s closest challengers and ended up as runner-up.Surprisingly, Sundermann decided to leave Stuttgart and return to work in Switzerland, where he had managed before. In order to not lose his Swiss residency he was forced to return there (In addition his family had pressured him to return).Both teams’ impressive seasons led to first caps being awarded to William Hartwig, Caspar Memmering, Dieter Hoeness, Bernd Förster and Bernd Martin. 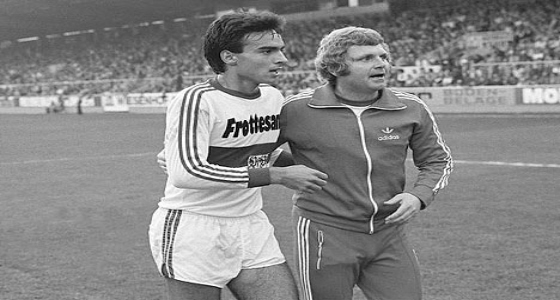 By the start of 1979/80 season, SV Hamburg were regarded as one of Europe’s best teams and a candidate to win the Champions Cup. By now Keegan had been elected as France Football’s Ballon d’Or twice and the team contained many West German Internationals. The Kaltz-Hrubesch combination was seen as one of the best on the continent (Kaltz would cross from the right side for Hrubesch to score from headers).Due to major expenditures in the previous few seasons, Netzer made one notable purchase. Central defender and future International Ditmar Jakobs arrived from MSV Duisburg.Future Internationals: Defender Holger Hieronymus arrived from neighbors St Pauli and Jurgen Milewski arrived from Hertha Berlin.Hamburg also ended their partnership with Hitachi and signed on with BP-British Petroleum as their shirt sponsors.For Stuttgart, former Darmstadt Manager Lothar Buchmann was appointed as the new man to lead the team.They were able to keep the backbone of the team, but they were unable to hold onto Dieter Hoeness, who joined Bayern Munich.
Stuttgart did well in the UEFA Cup that season by reaching the semifinals.

Both Hamburg and Stuttgart were strong, but this was the season that signaled Bayern Munich’s resurgence with the double act of Paul Breitner and Karl-Heinz Rumemnigge. Nevertheless, Hamburg were in the running up until the end. Their loss in the penultimate match vs. Bayer Levekusen cost them the title. Stuttgart for their part maintained their consistency by finishing third.A few days later, Hamburg’s European dream ended in defeat as they lost the Champions Cup Final to Nottingham Forest. Many had predicted them as winners after their demolition of Real Madrid in the semifinals (0-2, 5-1).Hamburg’s end of the season was also marred Manager Branko Zebec’s drunk driving incident in between the Real Madrid ties. Zebec’s position was further undermined when it was reported that following the Champions Cup defeat the players had ignored the curfew set by him and had instead been drinking through the night at the Hotel bar.Furthermore, Kevin Keegan had already declared during the season that he would be returning home for the following season and joined Southampton.For the 1980/81, Hamburg achieved a major coup by bringing in Franz Beckenbauer. Though ageing, his presence strengthened Hamburg’s box-office clout.