Return to Hostile Street – Dave Waller, The Jam, and the Poetics of the New Wave Part One of Two 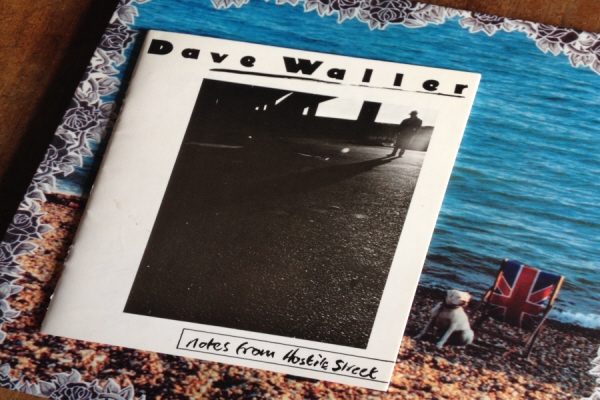 The Birth of the Modern Word

In his last year at primary school, Paul Weller enjoyed reading Greek mythology. But then, at Woking’s Sheerwater Secondary Modern School (and despite his attempts across the first two years to, academically-speaking, knuckle-down), Weller developed a hatred of the teachers’ lack of professional compassion for the pupils, and had resigned himself to self-imposed academic failure. Deliberately detaching himself from schooling,

By the time he was fourteen, Weller had discovered the opposite sex, alcohol, and the Together with Steve Brookes – whom Weller describes as his best friend between the ages of fourteen and sixteen – he formed The Jam in 1972. But it wasn’t until later that year, according to Paul Honeyford, in The Jam – The Modern World by Numbers (1980), with Weller and Brookes both realising that the Surrey commuter-belt town that was Woking, was not only starved of competent musicians, but other like-minded souls of their own age, “that the next link in the chain was forged when Dave Waller arrived at Sheerwater” (p.9). Appearing at their Secondary Modern like a creative bolt out of the blue, Waller sat next to Weller during music lessons, and, rather scruffily, exuded the confident air of a Beatnik writer of prose. Like a moth to a flame, it was precisely this casual display of nonchalant creativity that drew Weller to Waller. For, having now grown their hair and started to smoke marijuana, “[t]he somewhat bedraggled poet quickly endeared himself to Weller and Brookes” (p.9).

In turn, Waller fell under the influence of the embryonic duo that was The Jam, letting Weller persuade him to purchase an £18 guitar and join the group. Then, quite quickly, the trio’s friendship blossomed – as Steve Brookes rather fondly recounts in his memoir of the period, Keeping the Flame (1996) – into a full-blown brotherhood that was, in its spiritual affinity, nigh-on divine: “Our friendship was, by this time, written in stone and the common goal we shared was akin to religious devotion. Like all believers we felt a little bit above the crowd and we were really at ease with one another, almost a telepathic understanding” (p.18). However, Waller’s inspirational role – whilst significant during this formative stage of The Jam – eventually proved to be limited to that of general creativity, rather than any form of overt musicality. No matter though, for as 1973 melded into 1974, the recruitment of drummer Rick Buckler transformed them into a four-piece, and, in so doing, they won first prize in a local talent contest. Now, convinced that the pop music charts was theirs for the taking, rehearsals continued apace until, one day, Dave Waller came to the decision that poetry, and not music, was his true calling, and walked away from The Jam. An amicable split, Waller was to remain a close friend of Weller’s across the coming decade. 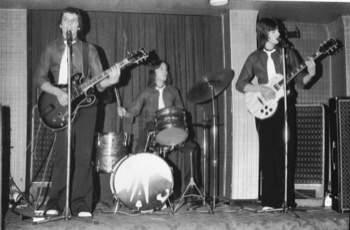 The Rise of the Modern Word
Around the time of The Jam’s second long-player, This Is The Modern World, in November 1977, Paul Weller was being more open about his now wide-ranging influences (that is, above and beyond The Who and Punk), especially those derived from both literature and poetry. Thus, Liverpool ‘Beat poet’ Adrian Henri was acknowledged on the reverse of the album’s sleeve for inspiring the song ‘Tonight At Noon’, with Weller admitting quite openly, to Mike Nicholls, that “I really admire his sort of poetry” (p.36). Meanwhile, another track on the LP – again, making explicit Weller’s diverse sources of literary inspirations – was, in its original form, partly a poem penned by former Jam member Dave Waller. As a piece of music, ‘In The Street Today’ is, according to John Reed (in the sleevenotes to the remastered version of This Is The Modern World, April 1997), rather “undistinguished”. However, it was notable to Reed that Waller was awarded co-authorship of ‘In The Street Today’ as a result of the inclusion of the following prose:

With all being lifted from one of Waller’s half-dozen un-named poems that would eventually be included at the rear of The Jam’s very first sheet-music songbook of July 1978, Weller – as cited in Graham Willmott’s The Jam – Sounds from the Street (2003) – wrote by means of introduction to the songbook’s poetry element: “I thought it may be necessary for a few lines explaining the six poems included in this book. As in all cultures, which hopefully the NEW WAVE will evolve into (or maybe it has?), there are a lot of other Art forms not only music, but why not NEW WAVE painters, playwrights, authors and poets. One such person, and I’m sure there are a lot more, is DAVID WALLER, a very talented young poet” (p.87).

Ultimately, though, it was the striking similarities, between Weller and Waller, in their separate approaches to their respective crafts – yet as one within this song, ‘In The Street Today’ – that are of note. As Paul Honeyford points out, “the lyrics could easily have been written by Weller himself”, with ‘In The Street Today’ characterized by “the recognition of frustration without offering any concrete solution” (1980, p.54). Seemingly, then, this was an artistic trait that both Weller and Waller shared: detailed social commentary without the guilt of an inability to provide any remedies for societal ills.

However, during the early months of 1978, Paul Weller was, creatively speaking, adrift. Suffering from writer’s block, and perhaps drowning in overly poetic influences, his artistic listlessness was mirrored in the few songs that Weller did actually manage to compose during this period. Entitled ‘On Sunday Morning’, ‘I Want To Paint’, and so on, they were – as Weller was eventually to admit a short while later – ‘directionless’. As with ‘Tonight At Noon’ on This Is The Modern World, ‘I Like To Paint’ was indebted to the poetry of Adrian Henri (from whom Weller stole the title). But, recognising that they bore little resemblance to his solid song-writing of old, and that, in reality, they were all more like poems-in-the-making, Weller jettisoned both ‘I Like To Paint’ and this dead-end writerly direction. As he made explicit to Mike Nicholls a couple of years later: “It just wasn’t up to standard. I was writing soppy songs or trying to be flash and arty and I know that’s not what The Jam are about”, concluding that such prose-orientated compositions “were complete nonsense” (1984, p.40). This, then, was the fallow time of Paul Weller’s infamous ‘lost third album’.

The Setting of the Modern Word

November 1979 witnessed The Jam, as the darlings of the New Wave (the ‘pop music of the Seventies’, as Weller put it), breathe life into the Prog Rock dinosaur that was the concept album with the release of their fourth album, Setting Sons. However, this concept had nothing to do with ‘dungeons and dragons’, being instead preoccupied with ‘little boy soldiers’ amid a post-civil war ‘wasteland’. In fact, as Pat Gilbert outlines in the hard-backed book that accompanied the 35th anniversary re-release of the album, this concept – from the outset – owed its genesis to Dave Waller: “Literate and layered, Settings Sons had heavy shades of Orwell and T. S, Eliot, two writers from the first half of the 20th century who had a powerful effect on Weller during The Jam’s career. The singer had been turned on to them by Dave Waller … whose influence on the singer’s development as a writer cannot be over-estimated – indeed, the initial concept for Setting Sons was inspired by one of his unpublished short story-cum-poems” (2014, p.5).