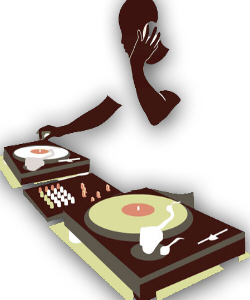 I’ve been trying in vain to write an article for ZANI for well over a year, I had several attempts at in depth journo type stuff only to fail miserably at the composition stage; the fault lay with the subject matter and not the author (phew). The problem was I had taken on a subject that I knew little or nothing about, did loads of “interweb” type browsing,

compiled lists of already known facts and then tried to structure it in a way that made interesting reading. The result was ‘pants’ to put it mildly, so then I had one of those epicure type moments ( I know it’s meant to be an epiphany but I was making a cheese and pickle sandwich at the time so it fits better ). It was this “Write about what you know” made perfect sense to me, so what follows is my first attempt at writing about what I know-D.J-ing, and getting an interview albeit via this medium of the “interweb” with Frank Broughton joint author ( with Bill Brewster ) of  “Last night a DJ saved my life” “How to DJ properly” ( I know a few people who could do with a copy of that one ) and the soon to be released “The record players: DJ Revolutionaries” seeing as I own the first two tomes it follows that I’ve already pre ordered DJR and can’t wait for it to arrive.It’s a compilation of interviews with DJ’s right across all scenes, some of which you may of heard of some you may not, but they all have one thing in common; the love/hate affair with the dance-floor, in that it’s a constant battle to be better than the last record you played or slightly different from the guy or gal you take over from, enough of my warblings over to the “Interview” enjoy.ZANI - What got you into DJ-ing in the first place?
Frank - I always had lots of records, I first played them in front of people at college. Me and my mate Marcel put on a night called Soul and Tequila, where all the ticket money went on tequila which we gave away at the start of the night. The venue only went to midnight so we had to get the party started quickly. It worked so well the college wouldn’t let us do a second one.
ZANI - First record you bought?

Frank Broughton- Chirpy Chirpy Cheep Cheep by Middle of the Road. Strictly speaking I think my gran bought it for me.
ZANI - Most useless piece of DJ kit (not flared trousers with sequins on either) you bought?Frank Broughton - Never really bought too many gadgets. My NYC mirrorball is still going strong, so that’s the best.

ZANI  - Over the two books who has parted with the best "pearl of wisdom"?
Frank Broughton- The most quotable interview we did has to be Fabio. He tells stories with such passion that the veins on his neck stand out. But overall everyone had something interesting to say. You realise that every generation has had the same drive to enjoy themselves in pretty much the same way, the only difference is what kind of music and what kind of technology they have available to achieve it.
ZANI  - Was there one particular DJ you were after to interview, or did they kind of select themselves?
Frank Broughton - We knew who had played key roles in the craft’s history. We were lucky to catch most of the people we knew about. Especially Francis Grasso, who in terms of what DJs do today, was probably the most influential person in history. He died a couple of years after we met him.

ZANI  - What venue, existing or knocked down would you love to play out at, and in your opinion is the best venue?

Frank Broughton- It’s not so much the venue as the attitude of the people in it. For me the Sound Factory in early 90s New York was the ultimate because people were so completely devoted to it. No bystanders, no distractions, just 2,000 people locked into the same experience. These days life in general is a lot more distracted, and most dance floors have quite short attention spans. It’s a shame but you don’t get the same intensity any more.

ZANI  - Best tune for that venue and do you own it?
Frank Broughton – “Welcome to the factory” by Angel Moraes, and yes I do

ZANI - Do you prefer Vinyl or CD as a working format?
Frank Broughton- Love vinyl cos my body understands it quicker so it’s easier to trust to instinct. CDs are great for taking deep amounts of music, but they need more attention from your brain.

ZANI  - Would you consider turning your books into a film? (I for one would buy the soundtrack) or the lists in the back from “Last night….” into a collector’s series of CD's (prefer vinyl)?

Frank Broughton - We turned down the chance to make a documentary out of Last Night A DJ Saved My Life when we realised the director didn’t really have a clue. Since then lots of things have chipped away at the subject matter so we’d be hard pressed to convince anyone to do it.Would still love to. We’ve done a couple of Last Night CDs. Going forward we’ll be doing some multimedia versions of our books where you can click through to the songs and buy a download album for each chapter.
ZANI  - What type of music would you of liked to of been part of from the beginning, eg Northern soul, Techno, House etc etc etc?

Frank Broughton- I would have liked to have been 10 years older so I could have got started properly with punk and been closer to the action when house came along.

ZANI - Anything that didn't make the book?

Frank Broughton- Loads. We had to choose the DJs who really made a difference historically, but there are about another 150 interviews in our files.
ZANI – With that in mind will there be a volume 2?

Frank Broughton- For sure.

ZANI - What advice, if any, would you give to budding DJ's out there?
Frank Broughton- Never play a record unless you love it.

ZANI – I don’t know about yourself but while I’m DJ-ing I do like a drink, what’s your fave tipple?
Frank Broughton - Bitter if I’m down the pub, whiskey sour if I’m being posh, and Michael Cook’s absinthe and lemonade at a festival (the drink you hate to love).

I’d like to thank Frank for taking the time to fill in the blanks on my electronic letter, the new book DJ Revolutionaries is out at the end of July, there’s a book launch at The book club, 100, Leonard st, London EC2 on Thursday 12th August from 19.30 til late, if I get time off for bad behaviour I’ll see you there.

If you feel the need to know more or fancy yourself behind the 1’s and 2’s pop over to djhistory.com an join the forum or alternatively check them out on all the normal social network type pages.