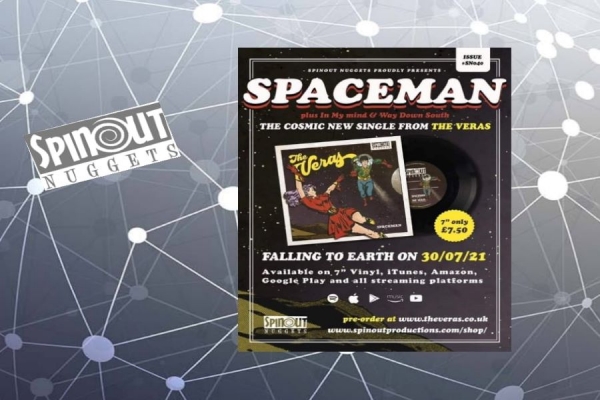 The new three-track 45 by The Veras is out now, and what a lively slice of music it is!

It echoes the influence of the past, but feels refreshingly fresh – which let’s be honest – is not the easiest of things to do. Now, if you are not familiar with The Veras – firstly – shame on you! (Why don’t you know them?) The Veras is pretty much The Small Faces cover band the Small Fakers doing their own thing when they are not busy performing their wildly entertaining sets covering arguably the truest British Mod band of the sixties. They say they are

“Inspired by all the great music from the 50s right up to about 5 minutes ago, but they espouse their influences as glam rock, punk, new wave, 90s indie, and Britpop. The Veras is all about bringing back the buzz of going to see your favourite band live, jumping up and down and singing along to every song at the top of your voice, and coming out of packed venues soaked in sweat – and not necessarily your own!”,

To be honest, that description is bang on. There are elements in their music that are beautifully crafted. These are catchy pop tunes that evoke the adrenaline-soaked euphoric nights that end up being tattooed onto your memory in such a way, that you know they will never fade.

There are elements of David Bowie within their sound, as well as Blur, and various other bands, but despite this, they seem to have their own voice also. The refreshing enthusiasm really stands out and makes you want to go on their journey with them. You want to sit in a van with the band and drive to gigs just simply grinning from ear to ear.

The follow-up to 2020s Paper Cup Telephones starts with Spaceman a wonderful psychedelic pop song that has all the hooks you would want, there is a funky Corduroy sound mixed in with a wall of sound that really gets you. You can not help but smile and dance. The B – side consists of two songs. In my Mind and the wonderfully evocative Way Down South.

Every track on this 7-inch record is well crafted by consummate artists, with Matt Bond providing the vocals. Side A: Spaceman is written by Jon Gray, as is In My Mind on the B side. The final track Way Down South has been penned by Matt Bond. Each track shows the band's understanding of their craft, their years of touring and performing, and then the hiatus brought by the Pandemic has seen them have that space to be creative in their own right, and what a treat it has meant for those who are brought into their orbit. Jon Gray is also responsible for the eye-catching pulp comic style graphics on the sleeve which I absolutely love. The Veras are:

The single is out on Spinout Nuggets and was produced by Sam Winfield and engineered by Tom Millar at Studio 91.

Go get it and put it on your turntable and be drawn into their orbit – you won’t regret it – you will be infected with a vibe that’s been lacking in recent times.