When I started work at Polydor in the early '70s, it was a dream come true. I'd worked at HMV records in Oxford Street for five years, and was bored with working in a shop, even though it was the biggest in Europe. Laurie Adams, who was Polydor's Tape Marketing Manager, turned up unexpectedly and took me out to lunch.

In the end, he offered me a job working as his assistant (dogsbody). He told me; "Providing you pass the interview with Polydor's General Manager, you've got the gig." The meeting with the GM went well, although I found him to be very straightforward for someone working in the record biz. I thought hip, streetwise people would be running a record company, and not someone who looked as if worked in the Civil Service.

At the time, Polydor's big sellers were The Osmond's, The New Seekers, and James Last. Please don't knock Last, as the sales of his records paid the salaries of all the Polydor's employees, worldwide. There was also another big band from Wolverhampton, called Slade, who were having hit after hit on the red label.

In 1973, Polydor released the single, 'Merry Christmas Everybody', which went platinum and kept us all in a job for another year. The same year, Polydor also released Sladest, which was a greatest hits album, and this went straight to No. 1 on the charts. As it went silver in two weeks, Polydor decided to throw the band a big party when it went gold, and present them with their gold discs. 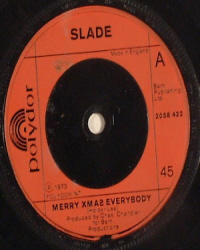 As the day got nearer, there were some worried looks on the management's faces, as the album, hadn't quite registered enough sales to receive a certified gold disc from The BPI. Our sales director overcame this little problem, by getting a few 'friendly' stores to order enough copies, so that it appeared on our computer printout in time, and the party could go ahead.

It was my first [record biz] office party and it was an eye-opener. The afternoon was spent partying, and in several offices, you could smell the sweet aroma of a 'jazz woodbine'. I recall one member of the band had a right result, as he pulled one of the secretaries. He popped into the MD's office for a bit of privacy, only to be interrupted by another secretary; though all she saw was his white bum going up and down, and some female legs waving about in the air. I have to say he made the right choice, as this particular girl did have some 'lunch'.

Another problem occurred when Dave Hill decided to take his gold disc out of the frame and play it, just to see if you could actually hear the music. He also may have noticed that there were six tracks on his gold disc, when the LP of Sladest, had five tracks on either side. When he played the album it turned out to be a different band's record. Evidently, the factory had run out of stock and pressed another band's record with Sladest labels. The band did see the funny side of it, though, there were a few red-faced execs walking around.

I went to see Slade a few times, once at Earl's Court and I have to say, they were a good live band. They played to their audience and made sure everyone had a good time. As a first-gen Mod, the clothes that they and their audience wore, were naff, but this was the early '70's. The next time, they were on the bill at the Donnington Park Monsters Of Rock festival, on 22 August 1981. AC/DC were the headliners and the other bands included, Blue Oyster Cult, Whitesnake, Black Oak Arkansas, and Blackfoot. My girlfriend at the time was a journalist for the Japanese pop magazine, Music Life and, as she had to cover the festival, I had to attend. I drove her up to Donnington, with a bunch of Japanese photographers, which meant, I couldn't drink, as I would have to drive them all back to London. Something I wasn't happy about.

As I had an 'All Areas' pass, I watched most of the bands from the stage, or I wandered about the VIP area. For the latter half of Slade's set, I joined the great unwashed and watched from out front. When they appeared, they really rocked the festival audience and they finished their set with 'Merry Xmas Everybody', which had everyone singing along to a Christmas song, on a summer's afternoon.

Now, I've never had much time for heavy-metal music and most of the festival went over my head. AC/DC was a cut above the rest; BOC has only one decent song ['Don't Fear The Reaper'] and, I have no recollection whatsoever what Blackfoot or BOA played. I was on stage for Whitesnake and was amused with David Coverdale's performance, as he spent the entire set, shagging the mike stand, in a very tight leather suit. I understood that this was de rigueur for heavy-metal singers and, after a few numbers, I sodded off backstage. 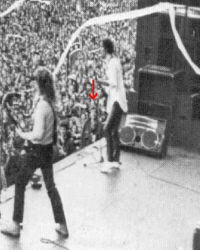 In 1982, a friend sent me the Slade single, 'Ruby Red', and the front photo showed a view of the Donnington crowd from the stage. If you look closely at the bottom right-hand corner of the stage, you can just make me out.

Just prior to leaving Polydor, Chas Chandler gave me a call; he wanted me to check out a new band that he had taken on. They were playing in a pub in Whitley Bay and I met up with him to make the travel arrangements. When I walked in, 'Noddy' Holder was sitting at the table and I can honestly say, there was nothing big-time about Chas and 'Noddy'.

When the time came, we took the train up to Newcastle and it was an interesting trip, as I spoke to Chas about The Animals and Jimi Hendrix. He informed me that he had many tapes of out-takes by Hendrix, but owing to legal problems, he couldn't do anything with them. I have no idea what has happened to Chas's collection of tapes since he died in 1996, but hopefully, they will see the light of day.

There was a question I wanted to ask him about Slade and this was just the opportunity. I noticed that whenever I played a Slade 45rpm, the sound levels were higher than all the other singles'. I asked how he managed this and he replied.

"When I was recording the band, I'd put gaffa tape over the VU meters, which pissed off the engineers, as they couldn't see what levels were going down onto the tape. Then, I would tell them how loud I wanted it. They didn't like it, but that's how I got the Slade sound."

I have to say Chas Chandler was Gent, and one of the few that I met in the record business. There was no side to him, and he didn't boast about his achievements; then he didn't have to, his achievements said it all. Slade were down to earth and honest, and it's a real shame there are not more bands around like them, as you won't find this kind of honesty in the record business these days; mores the pity.