A Short History of the Band - Marmalade 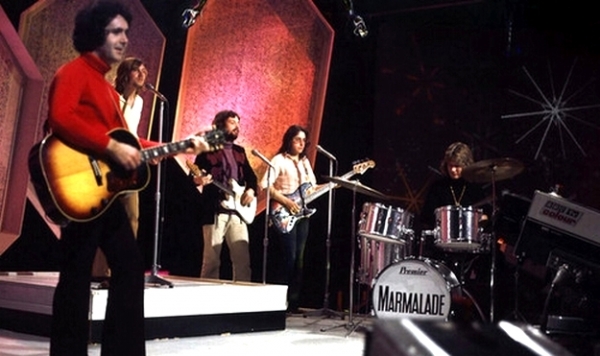 the boys formed a band in the early sixties. Junior Campbell (instrumentalist, vocalist), Pat Fairley (bass guitar), Billy Johnson (bass), and Tommy Frew (drums) became the Gaylords and played at local clubs. Later, Bill Irving and Raymond Duffy replaced Billy Johnson and Tommy Frew, respectively, and the quintet’s format was complete when Thomas McAleese (Dean Ford) joined them as the singer. Dean Ford and the Gaylords became one of Scotland’s most popular groups but, like many others in the early 60s, had little chance to get a recording contract. The group regularly supported visiting acts and were regulars on BBC Radio Scotland, but real success failed them despite their undoubted popularity within Scotland. Eventually, they were signed by EMI-Columbia in 1964. Their debut single "Twenty Miles" sold well in Scotland but failed to chart nationally. 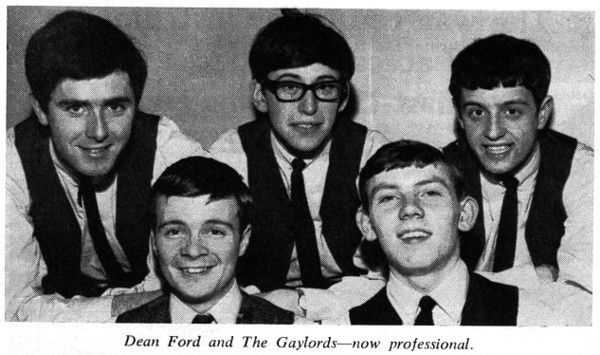 The group relocated to London, and fellow Glaswegian Graham Knight replaced Bill Irwin. Despite more efforts to crack the charts, their records failed, and fame eluded them. Things changed when the Gaylord’s changed their management at the request of their friends; The Tremeloes manager Peter Walsh recommended a change of name, and The Gaylords now Marmalade became the resident band at the Marquee Club, London. In 1965, CBS Records signed Marmalade, and their first single under the new label was "It's All Leading up to Saturday Night," but despite showing how the group had improved, no commercial success came.

Marmalade was a hard-working band and getting more and more exposure and winning the admiration of fellow artists such as Jimi Hendrix. The group persevered and their two bass players gave them a unique sound. Their next single "Can't Stop Now" (with Alan Whitehead as the group’s drummer) did well in the US, getting to number one on some Statecharts. However, chart success was not forthcoming, and they were all but ready to give up when in 1968, they recorded "Lovin' Things." The single sold well and gave the group their first UK hit.

Their next single was a cover version of The Beatles' "Ob-La-Di, Ob-La-Da," from the White Album. The song became the number one hit in the UK and sold millions of copies around the world. Marmalade was delighted with their success but a bit embarrassed because the sound was too commercial for their tastes; however, their record company was keen they continued in the same vein. Eager to lose the ‘bubble-gum' tag, they changed labels and released “Reflections of My Life," an original composition by Campbell and Ford incorporating pop/rock and harder progressive elements. The single went to the top of the UK and US charts. The follow-up single "Rainbow" also sold well. 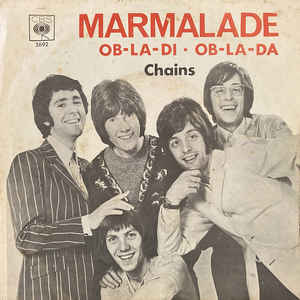 By 1970, Marmalade was in severe internal strife, and Junior Campbell left the band to pursue a successful solo career. Hugh Nicholson (former Poets) joined Marmalade and shared the vocals. Junior Campbell continued to do the band’s arrangements, and Marmalade’s music changed back to rock’n’roll. Alan Whitehead was eventually replaced by Dougie Henderson (Poets). By 1972, Pat Fairley decided to give up performing and took over as the band's publicist and coordinating publishing activities. In the same year, they were back in the charts with "Radancer.

As the years passed, new line-ups followed until Dean Ford was the only original member; by this time, Marmalade was more like Status Quo, but their popularity slipped as music tastes changed. Peter Walsh grabbed the opportunity and used Alan Whitehead and Graham Knight as the basis for a relaunched Vintage Marmalade. Sandy Newman (vocals, guitar, keyboards) and Charlie Smith (guitar) made up the new format, and they had a surprise hit with "Falling Apart at the Seams" in 1977. This was the group's last chart success. Marmalade continued with different formations to entertain live audiences.

Dean Ford continued as a solo performer and released a self-titled LP in 1975, then later worked on a project with former Marmalade band member Hugh Nicholson. When his solo efforts failed to attract attention, he moved to the US in 1979. Now battling alcoholism, he dropped out of the music business. The royalties from "Reflections of My Life" keep him financially afloat, and in 1986 with the help of Alcoholics Anonymous, Ford was sober. Gradually Ford turned to music again by appearing in small clubs and open-mic venues. In 2002, he was back in the recording studio with a revamped The Sensational Alex Harvey Band (SAHB), and they recorded a version of Dancing In The Rain for a Tribute to Frankie Miller's album. He continued touring with The Sensational Alex Harvey Band. 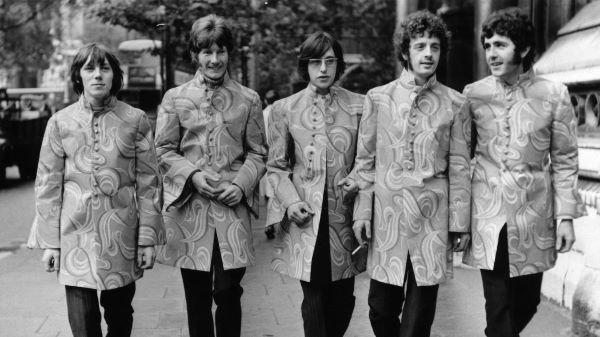 Later in 2012, Dean worked with Joe Tansin (Badfinger) and recorded a notable version of "Reflections of My Life." Dean Ford passed away aged 73 in 2018.