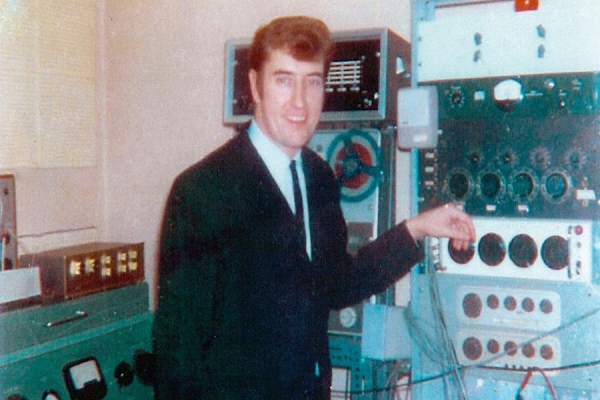 Robert George Meek was born in 1929 in Newent, England. Joe’s mother wanted a girl and dressed him as a girl. Whilst his three brothers were outward going young Joe was introverted and enjoyed staging magic shows for other children and dressing up for his own elaborate theatre productions.

His other love was old radios and record players. Joe began building his own electrical gadgets and would rig up speakers so the local cherry pickers could listen to the radio as they worked. Later he became a mobile DJ, travelling the area with his own mobile set up, playing dances for pennies. This made Joe very popular and he enjoyed the limelight. Called up for National Service he was trained as a radar technician in the RAF and when demobbed worked as a TV engineer before becoming a recording engineer with IBC Studios, London in 1953. Like many producers after him, he worked unsupervised and would experiment with the day’s recordings. For instance, he added an echo effect to Frankie Vaughan’s ‘Green Door’, and messed with the microphones on Humphrey Lyttleton’s ‘Bad Penny Blues.’ Joe mixed the final cut and The Humph was quite impressed with the result. ‘Bad Penny Blues’ made the UK top 20 in 1956. Later he became an independent record producer for jazz producer Denis Preston’s Landsdowne and produced the early hits of Lonnie Donegan.

Joe Meek was an innovative record producer and constantly experimented using whatever was at hand to come up with a sound that was different. In doing so he literally developed the studio as an instrument. Keen to branch into writing and producing Joe started Triumph in 1960. This was a small studio above Mr and Mrs Shenton’s Leather Goods shop, in 304 Holloway Road, North London. Joe found a financial benefactor called William Barrington-Coupe, Major Banks who bought half the shares in Triumph. The Outlaws and The Tornados became Triumph’s house bands and to get unique sounds, audio tapes were run backwards, combs were scraped, bubbles were blown through water, glass was smashed, broken clockwork toys and radio interference was recorded, and toilets were flushed. Needless to say, Joe ruled supreme and to demonstrate his sonic dexterity and creativity he wrote and produced an "outer space music fantasy" concept album, entitled, I Hear A New World with a band called The Blue Men (1960).

The complete works were not released until much later. Jo Meek then teamed up with songwriter Geoff Goddard and vocalist John Leyton and The Outlaws to produce Johnny Remember Me (1961)The eerie sound effects were due to the unusual locations such as bathrooms where the song was recorded. In 1962, The Tornados had a number one hit with their instrumental Telstar. The record went to the top of the charts in the UK and US. The Tornados were the first British act scores the number one position in the US charts.

In 1963 Meek worked with a then little known singer Tom Jones. Meek recorded seven tracks with Jones and took them to various labels in an attempt to get a record deal, with no success. Two years later after Jones gained popularity with the worldwide hit "It's Not Unusual" in 1965. Joe Meek also produced The Honeycombs and their top ten songs from 1964, Have I The Right? Joe produced some Screaming Lord Sutch recordings which were full of creaking coffins and doors, howls and screams echoing into infinity. Sutch was an eccentric rhythm and ghoul artist who would frequently soak his audience with fake blood.

Between 1956 and 1967, Joe released over 300 records, if not hits they were all certainly memorable and most of them were written, recorded, topped and tailed in his flat. Tom Jones made two singles for Joe Meek's Meeksville Sound Productions, are were exclusively released on Columbia. Whatever Joe experimented with those producers who followed him, like Sir George Martin and Mickie Most, benefited. He was dubbed the “Ed Wood of lo-fi.” Joe had his demons and could be an abrasive character when he took a dislike to musicians and singers. He dismissed Rod “The Mod” Stewart from an audition at his studio, packing him off with a ripely executed raspberry and declaring him as “hopeless.”

Joe was addicted to sleeping tablets and lived with progressive paranoia. He had a long-standing battle with his landlady, who would incessantly complain at the noise from the studio. TV’s Tony Hancock had a similar hate/hate relationship with his crusty old landlady Mrs Cravat.

Unfortunately, Joe took it a little further and it ended in tragedy when he shot her in 1967 before committing suicide. Ironically this took place on February 3, eight years after the tragic death of Buddy Holly. Joe was fanatical about Buddy Holly.

Emile Ford and the Checkmates
What do you want to make these eyes at me for?(1960)

Screamin Lord Such
Jack the Ripper