A Brief History of Skiffle 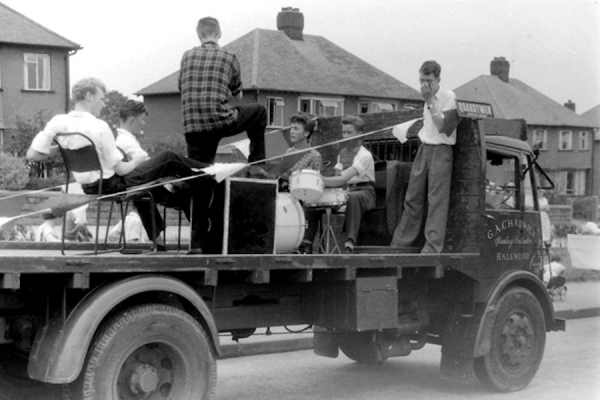 During the Depression, Jug music became a fashionable way to play traditional US folk and blues standards. Makeshift instruments including guitars made from a gallon can with a neck attached and strings or alternatively homemade banjos with a tanned hide stretched across a hoop and a fretted neck added with four strings were played.

A fifth string was added by the ‘Hillbillies’ and three finger plucking style gave rise to ‘Bluegrass’. Bass lines came from a single string upside down tea chests with a broom handle sticking out. Hair combs with tissue paper were used or if they could afford it a Kazoo, or Jew’s harp (mouth instruments made of metal and shaped to fit between the jaws and a sprung steel pin was ‘twanged’ with a finger). Someone would blow through a narrow-necked porcelain whiskey jar and percussion came in the form of washboards played with thimbles (similar to the Cajun frottoir). Old pans were added as cymbals and a rhythm stick made from beer bottle tops loosely nailed to a stout staff was banged on the ground to set the beat. Old tin cans part filled with grit were also used as makeshift maracas and some jug bands made a trumpet sound using a reed stuck in a funnel on the end of a garden hose. Jug music enjoyed a brief renaissance in the early seventies with Mungo Jerry and Australia’s own, The Mixtures.

In the US, the term skiffle was in common use by the late 20s and referred to a party given for the purpose of raising rent money. Guests were entertained by impromptu music and depending on the company would determine the music that was played. The original jug bands played jazz, country blues and hokum. 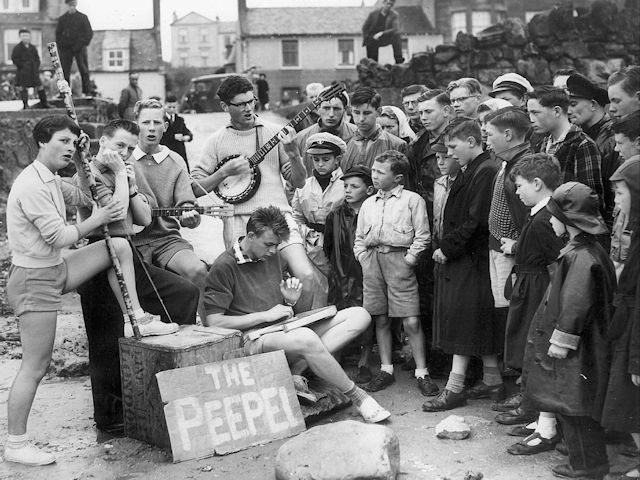 By the 50s in the UK the pre rock’n’roll musicians, came from a Trad Jazz background but preferred to play the railroad country blues, and gospel music which was popular in the thirties. They adopted much of the makeshift instruments of the original jug bands and called themselves skiffle groups. The music was loud and fast and would frequently bring the audience to their feet to dance. At first Trad Jazz bands had a small number of the makeup who doubled as jazz musicians then usually during the intervals would breakdown down into a skiffle group. The music had mass appeal and soon the Skiffle groups became separate entities. Johnny Parker’s Skiffle was one of the first to become popular and Johnny Parker was the piano player with the Humphrey Lyttleton Band.

Lonnie Donegan was by far the star of the Chris Barber Skiffle Group and left to pursue a solo career in 1956. When Dick Bishop replaced Donegan, The Chris Barber's Skiffle Group was sometimes billed as the Dick Bishop's Skiffle Group. One of the first skiffle hits came from Johnny Duncan Bluegrass Boys, Last train to San Fernando but Lonnie Donegan quickly emerged as the voice of UK Skiffle and he enjoyed many hits including Rock Island Line and Don’t you rock me Daddy-O. These records all sold well in the UK but even more surprisingly charted in the US. The Skiffle craze in the UK came at the same time when there was a greater awareness of American Folk music. Perhaps the record most associated with skiffle was Chas McDevitt’s Freight Train, with Nancy Whiskey.

Lonnie Donegan dominated the domestic scene but others were keen to emulate his success and The Vipers, who had not come from a jazz background, created a fresh style which attracted other young musicians and encouraged them to play. The Vipers appeared at the Two Is Club, Orlando’s Deli in Old Compton Street as did The Cottonpickers which featured Tommy Steele and Mike Pratt (Randal and Hopkirk).

Jet Harris and Hank Marvin, briefly joined The Vipers Mk 3, before forming The Drifters, then the Shadows with Tony Meehan (ex-Viper) and Cliff Richard who was discovered singing at The Two Is Club, Soho. Almost every Soho coffee bar and delicatessen had a resident band or group.

Trad Jazz and Skiffle was the music of the Beat Generation and beatniks wore faded blue jeans (Levis) with frayed bottoms, baggy thick knit woolly jumpers with long sleeves, thongs (no socks), and scruffy haircuts. The Establishment sensed a feeling of anarchy in post-war adolescents and at a time when the Cold War was at its height meant coffee bars and other meeting places of the young were under close official scrutiny. By this time the skiffle movement was happening all over the UK from Glasgow to Belfast, from Newcastle to Portsmouth.

When the 2 Is installed their first jukebox kids came from all over to hear the music. By 1957, the influence of rockabilly and rock’n’roll in the UK (as elsewhere) was immense. The arrival of rock’n’roll, however, saw the demise of skiffle but not before many skifflers like Cliff Richard, Adam Faith, Terry Dene, Wee Willie Harris, Joe Brown, and Tony Sheridan all went on to distinguish themselves in rock’n’roll. The generation that cut their teeth on skiffle went on to influence all forms of popular music. Luminaries such as, Lennon and Paul McCartney (The Quarrymen) , Mark Knopfler, Mick Jagger, Van Morrison, Alexis Korner and Ralph McTell all had their part to play in the music that changed the world.

Ken Coyle Skiffle
Down by the riverside