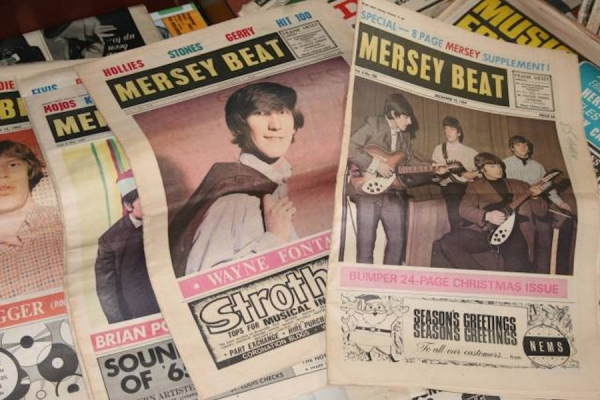 The Mersey Beat was a fortnightly newspaper started by Bill Harry and his partner in 1960. The purpose of the broadsheet was to cover the emerging beat scene of the sixties in Liverpool. An early “Gig Guide” the Mersey Beat was full of information about the groups, photographs and who was appearing and where.

At first, it had a small circulation but as the reputation of the Mersey Sound grew then it became more widely distributed. Bill Harry had been an art student at Liverpool College of Art (with Stuart Sutcliff and John Lennon). He took an interest in the local music scene and started a small broadsheet called ‘Jazz,’ in 1958. He had plans to produce a better-quality publication called ‘Storyville/52nd Street.’ As a journalist. when he became exposed to the growing rock’n’roll revival on Merseyside he changed his direction. Bill saw the importance of the new order of music and was frustrated at the apparent lack of interest from the local media.

Bill and his partner Virginia borrowed £50 and started the ‘what’s on’ publication which was devoted to the music scene on Merseyside. Liverpool had over 300 club and dance venues and there were at least as many bands, many with loyal followers. Hence a detailed gig guide would be very important and the paper was distributed through three main wholesalers, W.H.Smith, Blackburn, and Conlan. Initially, the Mersey Beat covered the whole of Merseyside including Widnes and Warrington and the first issue sold 5000 copies which was a complete sell-out. 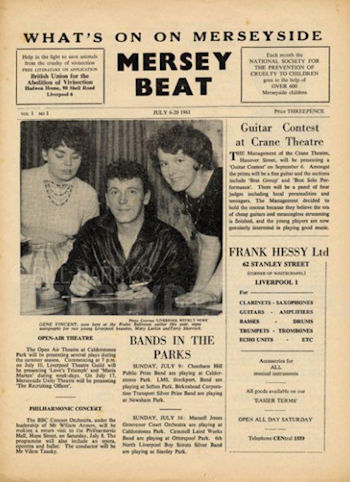 In the first issue, there was a brief Beatles biography written by John Lennon entitled On The Dubious Origins Of Beatles, Translated From the John Lennon. The origins of the name Mersey Beat came from a reference to a policeman’s beat (territory) and at the time bore no reference to a musical beat. Ironically when the musicians from the area became nationally and internationally popular, the sounds of the Mersey became known as the Mersey Beat. As the focus on music grew the paper’s circulation increased covering groups in Manchester, Birmingham, Sheffield and Newcastle. The paper content was compiled in a tiny attic office in Renshaw Street, Liverpool. At first, Dick Mathews took photographs and Bill wrote the copy but as the paper grew in circulation others contributed too. One of the many innovations introduced by Harry was encouraging his photographers to take pictures in situ and not just rely on studio portraits. At the time it was probably driven by economical necessity but the images now have great historical interest.

The Mersey Beat covered the early days of the Beatles and remains the most accurate chronological account of their rise to fame. Bill was a close friend of the group and because they were considered the cream of Mersey he continued to promote them in his newspaper. Bill Harry missed no opportunity to promote his paper and personally visited many music stores throughout the area. Brian Epstein managed North End Music Stores (NEMS) and took a dozen copies but was amazed when they sold so quickly. Keen to cash in Epstein increased his order for the second edition which contained a front cover dedicated to the Beatles with a photograph of Lennon taken by Astrid Kirchherr. The headline read 'Beatles Sign Recording Contract!' and related to a recording session with Tony Sheridan for Bert Kaempfert. 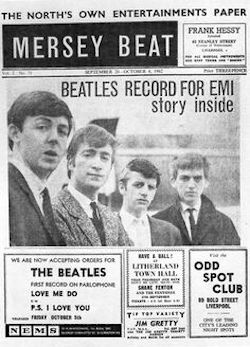 The Middle Class, Epstein was oblivious the new musical order on Merseyside but was very aware at the number his customers wanting to buy the Beatles records. By the third edition, he had booked advertising space and was the Mersey Beat’s official record reviewer with his own column, 'Stop the world - and listen to everything in it. Brian Epstein of Nems.' Epstein and the Beatles were fated to meet and Bill Harry made sure this took place at the Cavern Club. The success of the Mersey Beat as a music paper had an unusual spin-off. Keen to distance themselves from a rock’n’roll revival label, the new four piece outfits (i.e. lead, rhythm and bass guitars plus drums) adopted the name beat group and played beat sessions in Beat Clubs. The press followed suit and the ‘Mersey Beat” became an all-engulfing term to describe the sounds of the Mersey. Once the beat group phenomenon began to fizzle out national interest in the Mersey music scene dwindled until it was no longer financially viable to continue with the Mersey Beat newspaper and it shut down in 1964.

I Don't Want To Go On Without You

Ian and the Zodiacs

Kingsize Taylor and the Dominos

Earl Preston and the TTs

Tony Sheridan and the Beat Boys

Freddie Starr and the Midnighters