In Conversation with Sonya Madan from Echobelly

When you meet Sonya Madan, you are first struck by her understated beauty reminiscent of Audrey Hepburn, but behind this exterior lies a talented musician who was the front-woman for acclaimed 90’s ‘Britpop’ band Echobelly.

The band formed in 1993 after Sonya met guitarist Glenn Johansson in a pub and the two actively pursued a career in music. They teamed up with bass guitarist Alex Keyser and drummer Andy Henderson, who had previously played with PJ Harvey’s band. Guitarist Debbie Smith, formerly of Curve, came on board in 1994.

Sonya recalls; “We formed just before ‘Britpop’ came into existence and we got caught up on the whole bandwagon. When we started, ‘Britpop’ didn’t exist and a year later it did, so everything happened very quickly. It was an amazing time. When you’re going through it you don’t think anything about it; you’re just part of it. Retrospectively it was an amazing time for British music – the buzz and the excitement that something was happening that belonged to us, and we were part of it. I know a lot of bands came from outside London, but most of them were here (in London), and we all used to go drinking together and clubbing – it was really good fun!”

Did Echobelly like being associated with the ‘Britpop’ label? “I don’t think we had much choice; we ‘pandered’ to it as well, as that was all that people were writing about,” Sonya says, “I remember bands that came before us complaining that they could not get any ‘press’ because they were not part of that scene. It was very cliquey actually, but being young and naïve and being part of it, we didn’t think that much about it”, she continues. 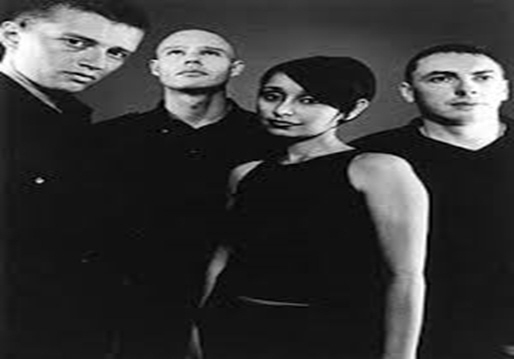 The group came up with the name Echobelly from the idea of "being hungry for something". With Madan and Johansson serving as songwriters, they recorded their debut EP ‘Bellyache’, on the independent Pandemonium label in late 1993.

The album was hugely successful and helped the band secure a recording contract with Sony records. Their next album ‘Everyone's Got One’ recorded in 1994, included the single ‘Insomniac’ which reached number eight on the UK Album’s Chart. This propelled the band to international fame, and as their music received more airplay, Echobelly came to the attention of Madonna who wanted to sign the group to her ‘Maverick’ label.

“Well it was impossible for Madonna to ‘sign’ us because we were already ‘signed’, so even though she enquired and Maverick A&R came to see us in Los Angeles, it was never going to happen. I don’t think Sony was ever going to let us go” Sonya remembers, “Madonna said some very nice things about me in the press, which was really quite interesting as she never really said nice things about anybody! I met Madonna very briefly when we were at ‘Top of the Pops’ performing at the same show”.

REM requested Echobelly as the opening act for their stadium-tour, and musician Morrissey was also a fan of the band.

Sonya says; “Mike Mills, REM’s bass player bought our first EP ‘Bellyache’ when he was in London, and told Glenn that after playing it to the rest of REM, it inspired their album ‘Monster’ which sold 10 million copies - it was their biggest selling album so it was very flattering in that sense. The guitar-sound is very similar and the ‘tremelo’ effects in particular. REM invited us to go on tour with them, and we played two stadium shows.”

I am meeting Sonya in a coffee shop in West London, en-route to a BBC Radio 6 Round Table show, where she has been invited onto the panel to discuss current musicians and bands. I ask her what inspires her musically and current music that she listens to.

She says; “Interestingly enough I don’t really listen to a lot of contemporary music, and my interests are in the esoteric. I’ve been listening to a lot of Indian music and a little bit of ‘Blue note’; early American jazz and a lot of ‘World’ music which I never thought I would get into, but there is fantastic stuff out there. The last gig I went to was Nishat Khan at Cadogan Hall and that was amazing”.

With the current resurgence of ‘nineties’ music and fashion, Echobelly have found themselves in the spotlight once again and a reawakened interest in their music. In 2014, British independent record label 3 Loop Music released 2CD expanded editions of Echobelly's 'Everyone's Got One' and 'On' albums. The re-releases included b-sides, live recordings, radio session tracks and unreleased material.

“Echobelly haven’t actually reformed,” Sonya states, ”Glenn and I started a new act a couple of years ago
called ‘Calm of Zero’, and we released two six-track albums called ‘Acoustic Sessions 1 and 2’, and did a little bit of touring with that. We got so many requests to play Echobelly tracks that we went out and did an acoustic Echobelly tour. As a result of that, some promoters said ‘Why don’t you form a band and we’ll pay you this much money and come and play and have fun’. It was never planned, but it seems a possibility, and we’ll do some shows, most likely abroad. I’m not looking to go backwards, but the songs are still relevant to me and I’m happy to air them. I would like to put Echobelly to bed at some point, but I understand if we are going to get any attention in the near future, that it’s going to be for Echobelly. I’m quite happy to promote it up to a point, and I wrote the sleeve-notes for the re-releases 'Everyone's Got One' and 'On' albums.”

At the height of Echobelly’s fame, Madan’s songwriting often explored the seamier side of life such as the milieu of prostitution and homelessness addressed in the song "King of the Kerb". So what inspires Madan’s songwriting and lyrics today?“Actually I’ve made a conscious effort not to write because until we get management and backing, you can end up writing songs that become too old. You get different types of writers; you get writers who continually write, as they like volume, but for me it’s almost painful to write something and then never release it, and let it go into the dustbin of oblivion – I find that really uncomfortable. Having said that, the odd song does come through. It’s a really hard question to answer how I write, but in reality, when I listen to the music I go into a ‘zone’ and anything can come out of that; there’s no particular influence. Recently a song I wrote had a real pioneering spirit, and that theme stayed with me for a couple of songs, almost like the original ‘rebel’ energy – I’m not quite sure because I haven’t really articulated it, but there is something there about the ‘pioneer’ spirit ; walking an unknown path and the dangers and the glories that lie within it.”

“At the moment Calm of Zero is acoustic, but the ultimate ambition and goal is to get a band together because I love the sound of electric guitar – I love rock and roll for want of a better description and I am very comfortable on stage – I want to get out there and make some noise (laughs). Not on a flippant level, I want to do something special – you have to have a little self-belief verging on arrogance in this profession and it is definitely there, mind you it is balanced out by my fair share of self-doubt,” Sonya reveals, “What I’d like to do is have full-on band sound for albums, but also release acoustic albums here and there and keep it far more fluid in terms of creativity. We don’t want any restrictions on it, so if we want to use a sitar or an African instrument or whatever; we can, just to have total free-rein. Then the acoustic sessions become something experimental and not based at all on any ideas of having to sell it – it’s purely creative expression, and the album and the band become the main thing. Calm of Zero excites me more as a band, because that is moving forward, but I’m still happy that people want to hear Echobelly. Being a realist, I totally understand that, because Echobelly meant something to some people’s lives, judging by the kind of reaction we used to get ‘live’. Nostalgia is a very powerful thing.”

Starting out again, as a new band, has given Madan time to reflect on how the music industry has changed radically since the ‘Britpop’ era and before.

“In the current (music) climate it’s not that easy”, she reflects “The music industry has changed dramatically, and when we first started you got a band together and if you were any good, you were more than likely to get ‘signed’. We got ‘signed’ after our third or fourth gig. I remember our first gig, nobody came to see us but then it just kept building up and we played one gig at a venue in central London and it was rammed; people were fighting to get in and fifty percent of the people were music-industry people as well, and there was such a ‘buzz’, Sonya recalls, “I think nowadays, the whole system has had a sledgehammer taken to it and we’re not quite sure of the way forward –it’s a very precarious time for music – talented people will still come through, but I think that music will diversify into far more specialised sections so the ‘majors’ will turn into more ‘distribution’ companies, and I think a lot more specialised companies will come in under the ‘umbrella’ of the ‘majors’. It’s not about the music so much, and everything is ‘quickening’; if you don’t have a ‘hit’ with the first album, you’re almost always ‘dropped’, whereas in the seventies in Elton John’s era you were signed for at least three or four albums.”

Calm of Zero will be touring the UK and abroad in the near future, and Sonya discusses life on tour and her future hopes for Calm of Zero. She says,

“We have just got a new agent who is actively looking for gigs for us now -there will be a lot happening both abroad and here. Touring is a unique experience; the best way to describe it is ‘surreal’. As a woman you probably find it more difficult than a man just because of biological things. Living out of a suitcase for however many months means that you go into a sort of ‘bubble’, and you become a night-owl and spend time with the same people for twenty-four hours a day nearly. It is the oddest experience, but it can also be wonderful. Calm of Zero is where I’d like to go forward – I’d like to get a band together, I’d like to get ‘management’ and I’d like to get out there and live out of a suitcase again for a year or two.”

Photos sourced online: all rights remain with the photographer.