Lucky UK - Amy Rigby is on tour here (with assistance from her husband Wreckless Eric). 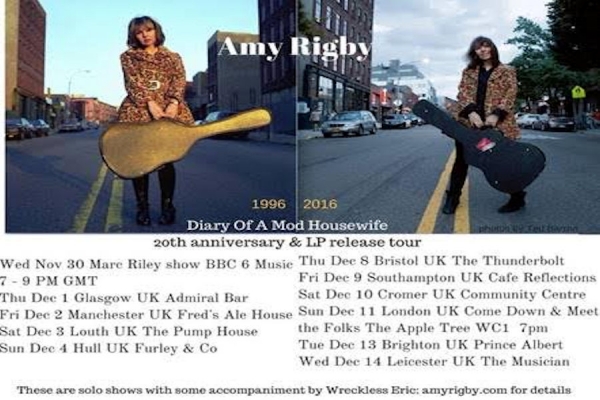 If this tour had a name it would be "The antidote to the end of the world doom and gloom blues tour."

Sound man: Yeah, come down and hear her.

Eric: All right, I will.


LATER: Amy on stage with Eric close by, moves the capo on her guitar and says something like, "I'm going to sing a song by someone else now, it's called The Whole Wide World," and Eric says out loud something like, "Not in that key you're not."

Eric: But you would sound better if you sang it in (names key).

LATER: Eric assumes Amy has a boyfriend. Amy assumes Eric has a girlfriend.

Cutting the long story short: they actually meet up and get together and get married and now they're on tour and sing together and it's great. It's magical even. But most of all it's authentic, real-life, heart-tugging, heart-warming stuff that comes from out of the Milky Way or somewhere. I have no idea how they do it...