Thurston Moore and Charles Hayward ROUGH TRADE 40 at The Social 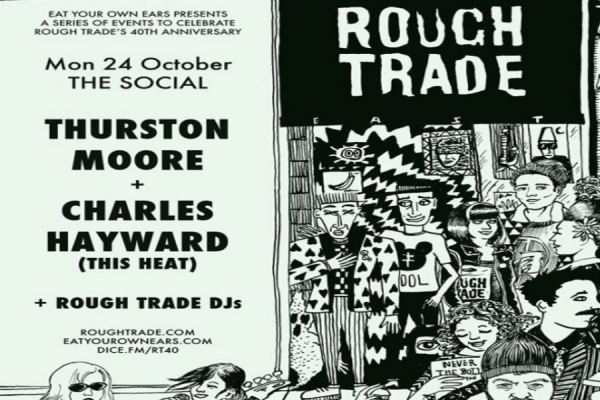 I drove through Camden to Regent's Park, windows open to catch the peat and leaf - the zoo dark and quiet, the white iced cakes of posh houses sitting on the sideboard with resident parking only outside.

Down past the line of taxis waiting for the workers from the BBC, glowing blue like TVs in sitting rooms do. Down Great Portland Street to tiny Little Portland Street, parked on Margaret Street round the corner and outside the old Speakeasy near a blood donor store.

The Social is one of two shops that are open in the street that feels late night, even though it's just gone 7:30pm. There is a late-night burger bar next door to the doorway that opens into a corridor with posters... no, a basement club.

You go down concrete stairs to a choice of what feels like either the stock room or back out into the street. But you open the door and wha-la, a warm, railway carriage of a space. You jostle back to the bar and jostle forward to the stage. And then you go... wait. And while you're waiting there's warm sound of Rough Trade DJ James Endeacott stoking the fire with a bit of this, a bit of that... and you don't need to shout over it. Cool.

So I'm there chatting to a nice chap in a Sonic Youth t-shirt. Young guy. From Italy. He's moaning, "If only my mother had given birth to me 10 years earlier, I would have been able to see..." and his list went through some pre-tty dire bands if you ask me..." I thought, wait... I think there's merchandise.

After a few sentences of chatting with the American guy that was the merchandise man, I realise this is Thurston. Someone you don't recognise easily sitting down...

So.. yes... he stands up. He takes the stage. The drum kit is as wide as he is tall. There's the sound of fairy-dust like you've gone through the curtain into another dimension... and the evening opened up.

And Charles Hayward ... well we would call it drumming if we were on the street outside... but down here he was tunnelling in to his inner core and I don't know what happened... but it drove Thurston to ... well... I can't say what it was like really... if I was driving we'd be off the cliff. Maybe it was an alleyway where he was pacing, smoking, kicking a trash can... maybe it was his inner world... maybe there was arguments and phone calls over music playing in another room ... some of it whatever this was was coming from a deep rumbling lava-like place ...

There were two sets. In between Hayward said, "We're going to slow the pace down now so you boys and girls can meet each other." And Thurston said, "Well, let's not be gender specific..." and we went somewhere else again. It could've been starry if we were outside... the zoo could be brought to life... the posh houses could be eating cake ... how amazing to see someone from one band that i remember from the late seventies at the ICA now playing with our new arrival from the USA having split from his Sonic Youth... Something inside me was dancing. No, wait, I was actually dancing... This isn't streaming stuff. This is music for live venues. Welcome to London, Mr Moore. Bravo. Encore. And Charles Hayward, you should be damn proud of yourself. You were magnificent.