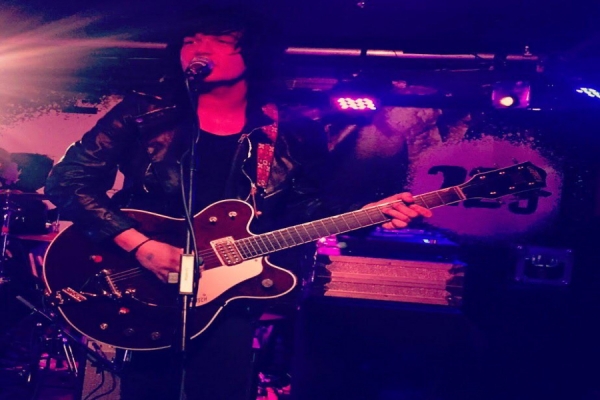 I love the sixties. The culture, the music clothes, the cinema, the girls… I mean Francoise Hardy… Then again ditto the seventies.

They were great times and it was great to live through them. As a kid in the 60s and a teenager in the 70s. For us of a certain age we will always – it was all just better. It’s hard not to say that when you were 14 in 1972, 18 in 1976 and so on. But it’s not about looking back. It it was we would have all given up bothering after Love released Forever Changes!The art, though, is to reference those times and put (whatever you get from them) into living today.

And of course you didn’t have to live through those times to love them.

One great artist that clearly loves those times and references them is Paul Orwell. His 60s-influenced music has been shaking and stirring his many fans for some time and the fact that his output is both prolific and wonderfully quality-controlled suggests he’ll be gathering more supporters along the way.

I came across him through his video from last year for his brilliant single You’re Nothing Special. It is one of my favourite-ever videos. An homage to the film Blow-Up featuring (this time) the beautiful Kirsty McAllister.

The single is from his limited issue vinyl-only album Blowing Your Mind Away that is now changing hands for silly money but fear not there’s also plenty of Orwell’s music out there on the internet.

He is one of the most prolific artists working today. Whether he is with The Shoots – that features the devastatingly soulful vocals of Lord Essien, on his own or with his band The Nightfalls it is all quite, quite marvellous…

The last album Organized Blues is a modern freakbeat instruMENTAL classic that’ll send shivers down a dead man’s timbers. The Shoots’ The Last Goodbye (written about and for Orwell’s father) is a deep soul classic while You’re Nothing Special is a piece of perfect pop.

Up next (in late Novermber) is the 7” Too Young to Die followed by the Hard Shakes EP in December.

Backed by the incredible Heavy Soul Records Orwell is a tsunami of energy and quite simply one of the best musicians working in the UK right now. He’s also one cool looking fucker!

Oh and after you’ve checked Orwell out then check out Nightfalls’ member Michael Parrett whose Television “Wake up, wake up use your mind” is due a heavy vinyl drop from Heavy Soul any time soon.

Produced by Orwell it is a slice of psych-pop fused with glam, Rolling Stones licks, T Rex grooves, pertinent lyrics and a killer of a hook. Add to that - like Orwell - Parrett has bags of attitude and looks like how rock stars should look!

Just remember one thing: THIS MUSIC SHOULD BE PLAYED LOUD.


THE SHOOTS
The Last Goodbye