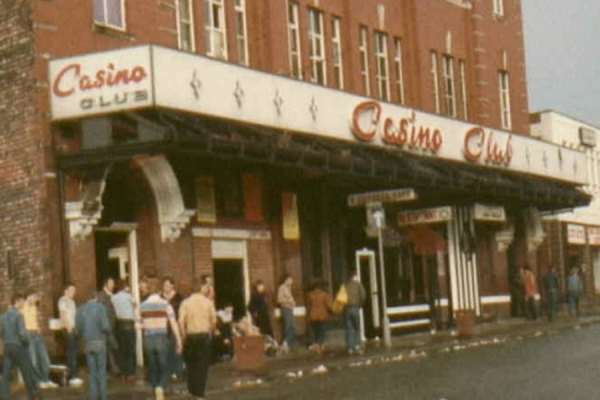 Wigan Casino is fondly remembered as a Northern Soul venue but - as Andrew Vaughan recalls - it also was a heavy rock venue.

In late April 1975 Betty Wright gave what many considered to be the best live performance ever seen at the Wigan Casino. She took to the stage at around 3.30am and those that were present claim it was a spiritual earth-shattering performance. Some three weeks later and just 10 days after the legendary Jackie Wilson took to the stage the Casino opened it’s doors to a “Rock Night” and over the next three years Wigan hosted many rock gigs.

The history of Wigan Casino is a varied history and it would take too long to recall all it’s makeovers here. Suffice to say, while the soul nights takes the plaudits and rightly so, the club was a commercial concern and money had to be made to keep the place ticking over. The owner in 1975, Gerry Marshall, aware that there was a substantial hairy population in Wigan and after being approached by people decided to put on a trial “rock night” on Thursday 15th May 1975 to see how it went. It must have gone okay because from Saturday 31st May the rock night, billed as “Rock On with DJ Dave Rawston”, took on its regular Saturday night spot. The night would run from 7pm to 11pm when there would be the weekly stand-off between the sweats leaving the venue and the soulies waiting to get in. There was no way these disparate tribes would get on and for two years tension would simmer as the two tribes verbally sparred with each other in Station Road.

Needless to say a good old music fan like me wouldn’t have missed it all for the world. So on the 31st May a gang of us 16-year olds (armed with false IDs) made it down to the Casino to watch the excellent Ducks Deluxe, shake our heads to ‘LA Woman’ by The Doors and gaze at gloriously attractive greaser girls. 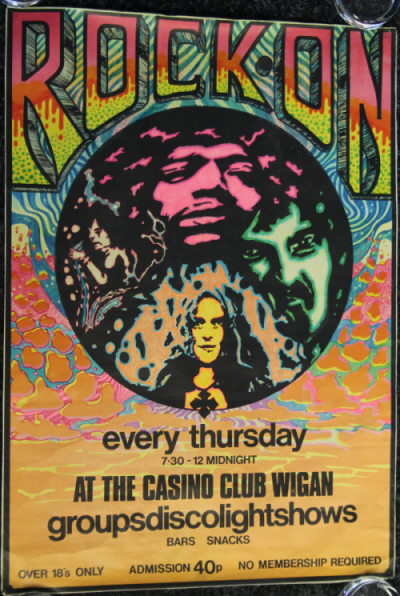 The ID wasn’t really necessary as they appeared to let all of Wigan’s Grammar School boys and Convent School girls through the door. Whilst the Casino was a magnificent ballroom for dancing with it’s sprung oak floors it was also a great venue for watching bands. The stage was high enough to see from anywhere and if you didn’t fancy the Mosh Pit (as it is referred to now) you could always take your drink and your long-tressed Patchouli-scented girlfriend up onto the balcony and watch and listen to the bands from there. I say “listen” but half of the time listening was an ordeal. As somebody that loved rock music but hated the heavier side of things I had a great problem listening to many of the bands. In fact I can honestly say I hated most of them. I appeared to be in the minority as air-guitars were thrashed, elaborate keyboard runs imitated and tables turned into “Cozy Powell drums”.

Ducks Deluxe were – what is now thought of as – a “pub rock” band and I really liked them. They were part of that scene that included the forerunners of the punk bands that were to emerge the following year. The following weeks’ bands were not so accomplished and without even hearing them or knowing what sort of music they played it doesn’t take a genius to guess they were heavy bands.

Here’s a few of the names that played in the following months: MOONRIDER, NUTZ, JUDAS PRIEST, SAM APPLE PIE, TRAPEZE, STRIFE, ALCATRAZ, EDGAR BROUGHTON BAND, SNAFU, GROUNDHOGS ETC. You get the drift. There was the occasional band that I liked such as the KURSAAL FLYERS, HUSTLER, HEAVY METAL KIDS, THE ENID and then later on the wonderful DEAF SCHOOL but mostly they were awful. But you didn’t really go for the bands. You went because you could get a beer no questions asked, the atmosphere was great, the girls were pretty and you could get the last train back home at 11.08pm and just catch the chippy before it closed.

As punk rock took hold many of the Casino rock night customers veered over to that side and the venue saw the best-ever gig there in July 1977 when The Stranglers played a blinding set. There were less blinding sets on other nights from The Spitfire Boys, The Adverts and Slaughter & The Dogs. It was after the Slaughter & The Dogs concert in September 1977 when it finally kicked off between the soulies and the rock night regulars. The attitude like the hair was now spiky and the drug of choice was now the same as the soulies’, it got messy, people got stabbed and the gigs at the Casino almost ceased with just the one-off gigs occurring from time to time. Mr. M tried to get in extra money by putting on Under-18’s nights.

It was fun while it lasted. Altogether now: “I’m as free as a bird now…”