The Maine Place to Be 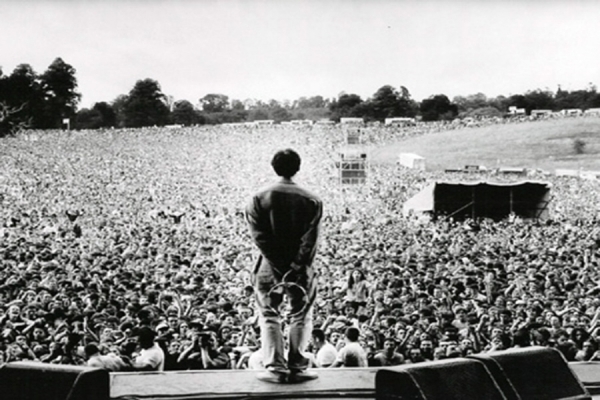 The gates only opened at 2pm, but I was convinced the place would be packed, I wanted to get to the front and more importantly I was driving, so it was my ball and if they didn’t play my way I was taking it home! Needless to say, aside from a few other button-down-burberry-shirted fanatics, the place was deserted all that was missing was the obligatory tumbleweed. We milled about, not too far from our turnstile of choice mind, just in case they took pity and opened early. By 1pm those milling around outside were many.

There was much singing, merriment and Adidas shod dancing about, by rubber limbed-Liam-esque, monkey swaggering lads, and ladette’s in a shouty-in-yer-face-Sara-Cox style, fashionable at the time. Not me, welded to my spot aside my turnstile of choice, my sole focus being on getting in the ground, getting to the front and staying there, these fools can have their drink, drugs and laughter, I’m here for the music, man.

Repeatedly, I checked the time, nearly there, my compadre’s, tried of my puritanical stoicism had thrown me the V’s and hitched a ride with a group of good time girls from Manchester, leaving me alone, sober and near the front of a now very long, and meandering queue. The steel turnstile groaned and clicked, I’d been one of the first here, and there was no way I was not being one of the first in. From behind came an over-the-top-roar and a tsunami surge. 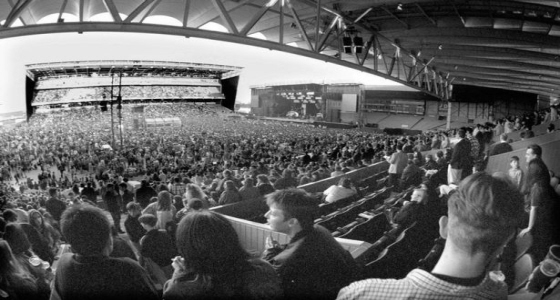 Realising my place was at risk; I too let out a dogs-of-war-roar propelling myself towards my fate. Ticket shoved at the turnstile attendant, and I was in! A red wristband secured around my wrist, and off I ran, like a screaming girl in early Beatle footage, to the front of the stage, dead centre.

Base camp had been established. It was a few moments after searching Meerkat-style for my mates that I looked down. Aghast, neigh I was distraught, the brand new suede, sand coloured wallebees, had been butchered! Never again would they resemble the un-spoilt sands of a Caribbean shoreline, their appearance now akin to that of rotting lemons. Trying not to hyper ventilate at the site of my shipwrecked wallebees, I noticed some bastards wayward cigarette had decided the burberry check needed a fag hole to complete the look.

Distraught, I turned to the stage, ready to put my faith in my rock and roll band. 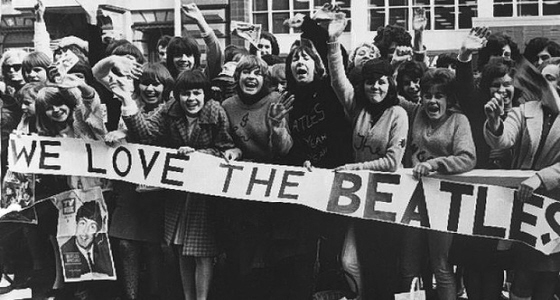 That faith in my rock’n’roll band has not waned, despite Noel’s insistence, it even survived ‘Be Here Now’. Fast forward twenty years to the day, almost, and I’m at Genting Arena (the Birmingham NEC in old money) to watch the apparently more sensible, and certainly more talented half of the brothers Gallagher, along with his High Flying Birds. The sand coloured wallebees have been replaced by black suede desert boots and the youthful impatience had evolved into a more leisurely approach ( 20yrs-a-gig-goer you need to learn something’s). I was reminded of the Robert Duvall, Sean Penn film from 1988, Colours, when Duvall’s character Bob Hodges tell’s his new partner, Danny McGavin (Sean Penn) the Bull joke;

There's two bulls standing on top of a mountain. The younger one says to the older one: "Hey pop, let's say we run down there and fuck one of them cows". The older one says: "No son. Lets walk down and fuck 'em all"

And like old bulls we arrived at the venue, made our way to the bar chewed the fat and soaked up the atmosphere, and watched the arriving masses. Our group, three couples, whiled away the time discussing the pressing issues of the day, do we have a conservatory or an orangery, the merits of ceramic or porcelain tiles for the bathroom and what a pain in the arse queuing for beer is, on the plus side, none of the ladies had need to take their shoes off yet. 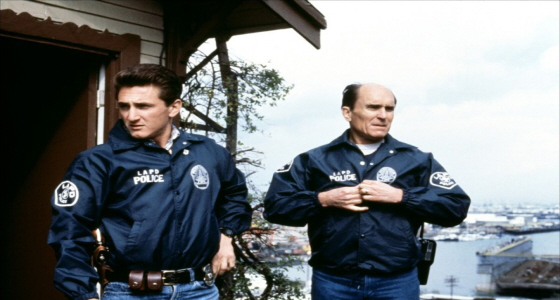 The Genting Arena is a pretty soulless affair, low, with a single tire that holds around 15,000, the first one of its kind built around 1985. After obtaining supplies (beer) and a bag of pin badges from the merchandise stall, we sauntered in to the opening chords of ‘Shoot A Hole into The Sun’ accompanied by an impressive light show and a crescendo of cheers, shouts and general good vibes. The whole point of Noel G and Oasis was, is, to capture the essence, the soul, the soundtrack of a pure, lets-have-it night out. The entire audience was with him from the off. Stood at the back I looked around the arena and in every face I saw reminded me exactly why this Mancunian, Beatle-head captured my heart and soul all them years ago.

It’s the music, purely and simply put, Noel doesn’t do anything new. He doesn’t reinvent the wheel, there’s no 15 minute fret-wank-frenzy, or enticing of flames from a burning Stratocaster and he’ll never make a Sgt Pepper, that said, the one thing Noel G does and does better than anyone else is, he adopts, adapts and improves. If true genius steals, then Noel is Dick Turpin. This musical-manc-magpie, takes chords and weaves them into your very sinew. He doesn’t claim ownership or originality what he does claim is that he, like us is ultimately, a fan. A fan of music, of bands, of rock and roll and all its idiosyncrasies. 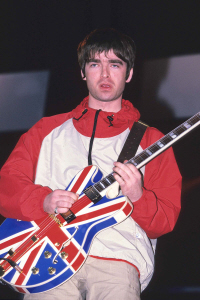 The six of us were merrily singing and swaying about at the back of the arena, an afternoon and early evening spent enjoying the pubs of Birmingham had lubricated our vocal chords and by the time Noel was ‘slowly walking down the hall faster than a cannonball’ I had also rewound twenty years and asked if anyone was coming down the front? Needless to say, no one was gonna ‘have it with me’, longingly I looked towards the stage overcome by nostalgia and a need to pogo, I was off!

If no one was coming with me I was ‘havin it alone’ . Snake like I slithered and squirmed my way through the gaps, as I got nearer the front though, the gaps became less and less and it came down to just pushing and shoving my way through. The closer I got to the front the further back in time I went, remembering all the times I’d seen the brothers G, Etihad, Reebok, Finsbury Park, The Albert Hall, Maine Rd, Whitley Bay Ice Rink.

I’d come to an impasse, the sea in front refused to be parted by this lone fish. Stranded in no-man’s land, a shove and a push sideways by a large shoal of Pretty Green devotees confirmed strength in numbers, and so I latched on. The tutting and moaning was auible as this multi headed beast moved through the relative head-nodding-calmness towards the football terrace raucous ahead. Stopping abruptly the multi headed Pretty Green beast found its spot and forming its own mini-mosh pit began to pogo, shout and sweat. 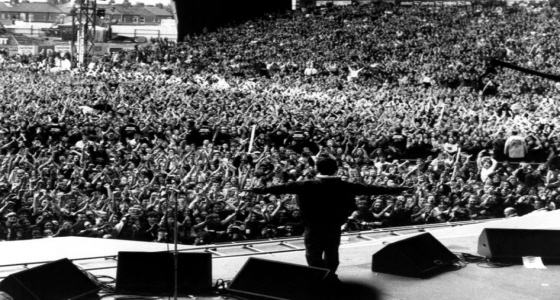 A very drunk Brummie swung his arm around my neck and became my new best friend as a crowd swell created an opening and stealth like he and I were through it and back on the move. A bit more ducking and diving and I was there, about 3 rows from the front pogoing for all my worth. Noel launched into ‘Do yer Wanna be a Spaceman’ realizing I’ve never heard this live before, the pogoing ceased. Still for a moment, I was ‘climbing trees’ again. At the Maine Rd gig I had stayed in the sectioned off pen all day, I didn’t move, I didn’t realise that the red wrist band enabled me to move in and out of that pen at will. I bounced, swayed and sang at one point my feet were off the ground and my left arm was somehow wrapped behind me and not feeling like it was connected. And all the while my head was filled with swaggering anthems of positivity. Half a dozen songs down the front at Birmingham I was lagging and sweating like the fat lad at the back of a cycle pack, I left my youthful memories in the hands of those whose pogoing calves had yet to give up, and headed back.

Solo Noel or Liam is about as close as it’ll get for us those of us still loyal to the Oasis sound unless the money speaks and the brothers G patch up their differences. Whilst there’s a part of me that would love them to soundtrack an my reminiscing and reliving of my youth, there’s more of me that would want them to rest where they laid, besides, the Burberry shirt doesn’t fit anymore.