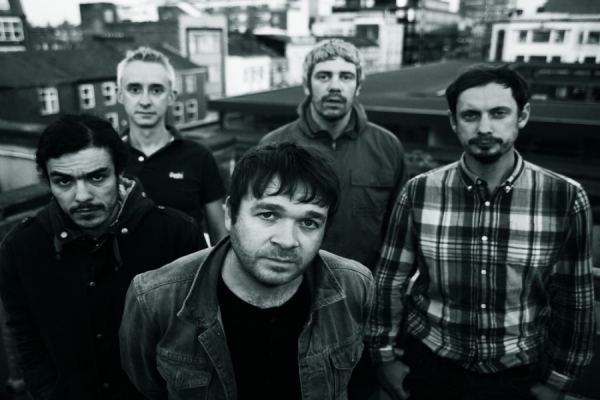 Back in the Atmosphere: Manchester band Space Monkeys talk Tony Wilson, influences and LP, The Daddy of them All.


Not many bands have the opportunity to say they were signed by Tony Wilson and stayed original when everyone else followed the crowd, although, Space Monkeys can. ZANI speaks to frontman, Richard McNevin-Duff, whose's gearing-up for their upcoming dates and getting out the Classic LP, The Daddy of them All

ZANI : Hi Richard and thanks for speaking to ZANI . What were your music influences growing up?

Richard: I grew up in a Working Men's club in North Manchester in the 70's/80's so I used to go to sleep as a kid with the jukebox playing loud downstairs. Smokey Robinson, Dylan, the Jam & the Beatles were the soundtrack to my dreams so subconsciously I got a proper musical education. Working class people have got great taste when they spend their money in pub jukeboxes.

ZANI : What was the first band you was in?

Richard: Crazy Rik & The Loonies. 1982. I was 10 years old. Me and my brother and cousins mimed to Madness records on double speed with cardboard instruments wrapped in tin foil. Did one gig and split up. Musical differences.

ZANI : You have a wide experience of different music in the bands you've been in, was there any chance of being on a keyboard, using samplers etc?

Richard: I love all types of music. There's no good or bad music to me, just different ears. We used samplers with Space Monkeys to create new sounds and sound modern. Personally though I've always loved guitars so that will always be at the core of any music I make.

ZANI : Was the Rave/Acid scene a part of you're environment or was you more into guitar orientated bands?

Richard: Acid House was my generation's punk. Then the Manchester thing exploded on the back of that with guitars so that was exciting when I was 17 and just starting my band. I went to a club in Manchester under the Corn Exchange called the Hangout every weekend from 1989-1991. Still my favourite club of all time. The DJ Dave Booth was one of the first to start mixing the Roses, Stones, Hip Hop & Acid House on the same night. He was a massive influence on me and it's a buzz that we are playing the Shiiine On Weekender with people like Dave Booth, Happy Monday's, 808 state and all these people who made my youth so exciting. 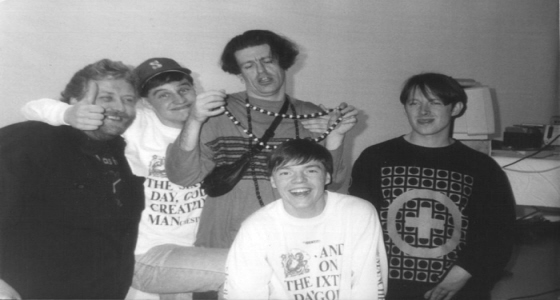 ZANI : You was signed to Tony Wilson's Factory Too records label, what was that like?

Richard: We made two singles for Factory Too in 1996 and then London Records (who funded Factory Too) dropped the label and pulled the plug on Tony Wilson. London gave us the master tapes to the album and said we should take it to another label. We owned the album and Tony was left with nothing. We stayed loyal to Tony and agreed to release it on a new label 'Factory Records Ltd' cos he still owned the rights to the name. We didn't sign a contract we just shook hands and then released it ourselves independently 50/50 with Tony. It was a lot of fun. Neither of us were interested in making money it was all about the music and creativity and having a good time.

ZANI : How did Tony hear about the band?

Richard: I slept with his secretary.

ZANI : I remember Tony used to sell T-Shirts at your merchandise stall, he seemed 'hands on'...what was he like to work with/for?

Richard: Ha! Ha! I don't remember that. No wonder we never sold any T-Shirts. Tony was a great man, really kind and a great businessman with his other things but with the record label that was his fun, it was all about being creative. It was frustrating watching crap bands have success from record company marketing and expensive videos and all the things we didn't have and then we'd spend hours and hours arguing with him over whether we should have a smiley face on a fly poster. We'd ask if we could make a video for the next single and he'd prefer to spend the cash sending out promo tapes out to DJ's inside soup cans. But he was straight up at the start when we met him he said he couldn't make us rich or famous but we would have a lot of fun. And he was true to his word.

ZANI : Your song 'Acid House Killed Rock N Roll' contains the line, 'I shot dead the last Beatle'...was there any negative feedback from that, as Britpop at the time was 60s influenced?

Richard: Hope so cos that was the whole idea. I lived in a flat above Home nightclub at the time and I was into breakbeat/house music and we were all into jungle and hip hop. I love the Beatles but that line was just a reactionary thing to all these fake bands pretending it was 1966 in Camden. NME did an interview and asked me 'What would John Lennon be doing today if he was still alive?' and I said 'Selling drugs down at Cream'. That didn't go down too well.

ZANI : You managed not to be a typical Britpop band, you was original, was that done to go against it or is that just the type of musician you are?

Richard: I think most bands sound like their record collections and that's how I see our sound. I met Tony Pipes working in Our Price record shop in Bury in 1990, he was into Hip Hop and Public Enemy and I was into Bob Dylan and the Clash. The manager of the shop was Pete Garner, the Stone Roses original bass player and he introduced us both to Love and Funkadelic and loads of obscure psychedelic records. Most bands split up because of musical differences but that was the reason we formed.

ZANI : The Space Monkeys have reformed, is it the original line up, I see Dom Morrison (original member) is in the band?

Richard: It's the original line up except Tony Pipes who didn't want to do it which was a shame but I respect him for that. He is an extremely successful artist and creative genius in the TV world and has a wonderful life down in London with his family. We have a new DJ Aza Bombaza who was a mate of Dom's and who asked to join the band originally in 1998 when he was just a kid and we were about to tour America. I just took a while making the decision. 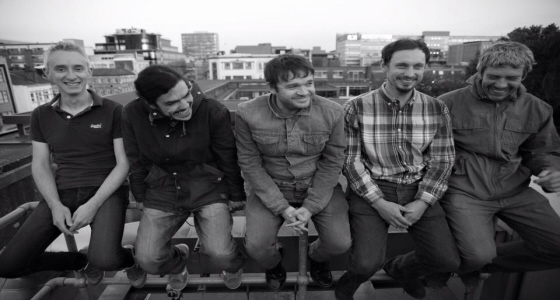 ZANI : Is it easier today with the internet for people to hear you, what is the difference now, from the 90s?

Richard: I like the idea that now you can tweet your favourite band and depending how much wine they have drank that night they will have a chat with you about anything, that's how it should be. Or maybe that's just me and I should turn my Twitter off when I open a bottle of wine at night.

ZANI : What's next for Space Monkeys?

Richard: We play 'the Daddy Of Them All' in full on Saturday 24th October at Manchester Sound Control and then the Shiiine On Weekender festival Saturday 7th November. 2016 is the Year Of The Monkey so I have it in my heart that we should make one last album, I have the songs in my head I just don't know if we can afford to record them. Whatever happens, it has been a trip. And when the trip ends, it's time to get off.