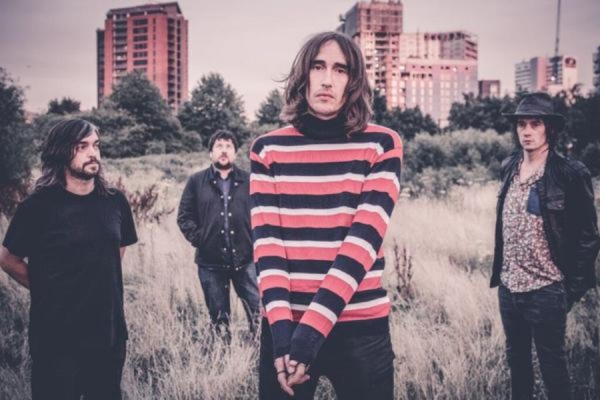 I have been a fan of Purple Heart Parade since their Manager, 5th wheel and sound-man extraordinaire, Stephen De Sarasola, pointed me in their direction around the happening of Eindhoven Psych Lab 2014.

Stephen led me to Purple Heart Parade, who in turn led me to fellow noise-cohorts Helicon, Helicon then led me to François Sky, François Sky and Guests played at Reverence Valada in 2104, through François I made contact with Jason Fletcher, one half of the dynamic duo, along with Nick Allport, responsible for bringing us the "celebration of the best in heavy psych, stoner and space-rock", extravaganza, that is Reverence Valada. Reverence Valada brought me and Purple Heart Parade to Portugal on this balmy, 2015 festival opening Thursday evening - everything is connected, what goes around comes around...

I had the pleasure of seeing Purple Heart Parade open last year's Liverpool International Festival of Psychedelia. As the opening band, there was no, obvious at any rate, apparent signs of nerves or tension - they just launched right in there with a trade-mark confidence and swagger that was refreshingly self assured. 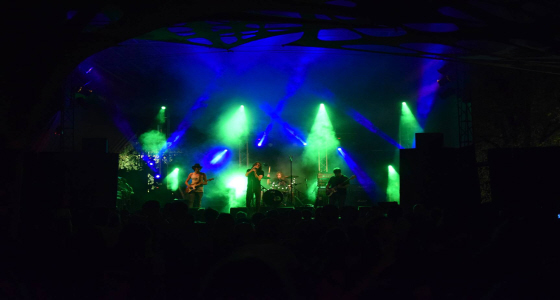 Tonight, Purple Heart Parade grace the Rio Stage at Reverence Valada, curated by Lisbon Psych Fest. They are 5th on a bill of 8 bands, 30 minutes between bands with no pesky other stage overlaps to contend with - my idea of the perfect festival set-up! The sun had gone down around an hour and a half before Purple Heart Parade take the stage at 21:40, maximising their syncro-meshing with the accompanying light show. 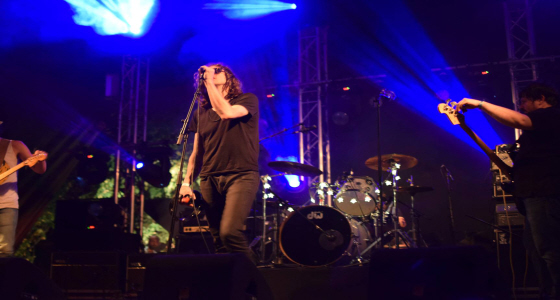 The band take the stage to the eerie, descending organ chords, of the cult tv reportage classic that was the 'World In Action'. This theme music from yesteryear, was the result of an on the spot jam between Jonathan Weston and Shawn Phillips. The high calibre investigative reporting of 'World In Action', which used Leonardo Da Vinci's "Vitruvian Man" as it's opening graphic sequence, sadly found it's demise with the onset of, and continuing cancer this is Thatcherism and the general dumbing down of the British "media". A fitting opening statement, from a band with it's finger on the pulse, if ever there was one...

Purple Heart Parade have everything the Stones had, in their blues tinged psychedelic period prime - the archetypal, animated, charismatic frontman, one part Jagger, one part Ashcroft, one part Gillespie, 100% Peter Cowap II. Mike Bee's guitar work manages to combine the light and shade elements of both Jones and Richards, and all under the orbit of one wide brimmed hat. Ste and Keith, just like Bill and Charlie, lay down the backbone canvas wash of colour, almost imperceptibly. Tune in to Ste and you get that outwardly mild-mannered Hong Kong Phooey janitor, wrapped in a snarling Russian bearhug. Keith, Marathon Man, Pleasant relentlessly pounds out the hypnotic beat with a finesse and work rate, that would put a Duracell Bunny to shame.

Next up is 'Face Down', their proud Madchester and beyond heritage, borne on their collective Purple Heart's, as a soaring badge of honour; 'Moonlight Burn', is awash with the lighter side of Zep-like, searching, probing flourishes, an irresistible pull, like the Valada moths to PHP's incandescent flame.

'Sister Libra', it's rumbling dream state intro evoking the passion of Themis - the personification of divine law and custom; 'Starfucker Blues', is a rabble rousing, ballsy terraces chant, a fist pumping head banging warning on the dangers of adoration, cloaked in one of the hookiest riffs of all time; 'Desolation Angel', is a blissfully tripped out melancholia-tinged lullaby, plaintive vocals underscored with understated abandon; And all too soon we arrive at the finale, 'The Room', an up-tempo paean of a celebration, a northern meandering wall of sound which has the whole crowd swaying under a full Portuguese moon, the sing-a-long chorus, this track has it all...

This has been a high octane, helter skelter of a performance, Purple Heart Parade master the stagecraft of unifying the audience to their common cause.

"Manchester, so much to answer for"...

The hooks and flourishes of tonight's performance on the Rio Stage at Reverence Valada, displays a band in their element, a band whose unique recipe for "mellowphoria", is guaranteed to caress all under their spell.

Purple Heart Parade have the talent, the ability and most importantly the songs to lift a big crowd and set them down again, mollified and ready for the next enveloping wave to wash over them. I was pleasantly surprised and delighted in equal measure, to see many in the crowd already singing along, an attentive and loyal fan-base is a sure-fire foundation for continued success.

Following their set, I asked the band a few questions;