One Unique Signal Talk Festivals, Recording and Working for the Telescopes 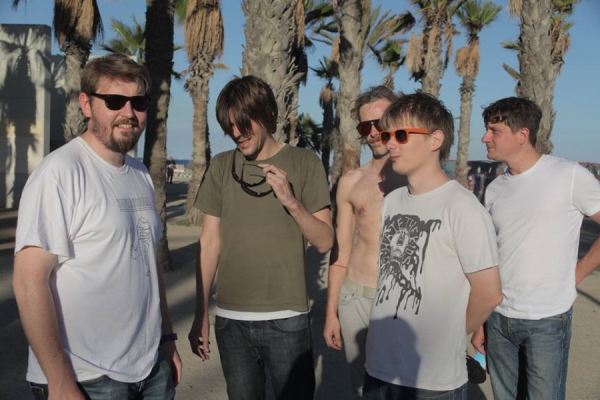 Having toured Italy and France in previous outings, the band head for the Reverence Festival, in Valada, Portugal; while re-visiting the sights of France in the meantime. ZANI interviewed OUS guitarist, Nick Keech:

ZANI: You're experienced with festivals and regular venues, how do they compare/ differ? (Sound, audience, feel etc)

NICK: "There’s no hard and fast rule with this. Generally, a packed regular venue is hard to beat and most bands would tell you the same. That said, a well organised festival with a sympathetic audience has a unique energy. Sound can be harder to tie down, especially at outdoor festivals and hope the sound dude is working some magic out front."

ZANI: How did you become involved with The Telescopes? They still have a contemporary sound and following even though they are an early-ish Creation band, what do you think the reason for this is?

NICK: "Stephen (Telescopes) has never sat still with his sound. The Creation Records era is just one snapshot in a large body of work that in my opinion has extended out to the far reaches of experimentation. There’s a very real beauty to the subtle approach he employed on the songs on that eponymous record, which in my view, compared to Taste, is in its own way an extreme act. When I first heard ‘Untitled Second’ back in the 90’s, I was kind of devastated! It was like the glorious punch in face ‘Taste’ afforded with its brutality had been replaced with a gut punch in the removal of that intensity. Over time I learned to love that second record for what it was which in turn helped me understand what I believe is the underlying philosophy of that band. In my opinion, you have to relinquish expectation and control with The Telescopes. It’s ever evolving, all embracing music. I think people understand this and want to be along for the ride. Stephen is by far one of the most creative people I’ve encountered and I literally have no idea what to expect from the next release. How we hooked up is that we basically hounded him into working together! It wasn’t particularly hard as he is very approachable."

ZANI: OUS are recognized and booked by London's best promoters, how important is it for a band to get into this position?

NICK: "The main concern for us is to work with people whose passion for music translates into the event. Shows don’t always work out as well as you’d hope on the night but if everyone is singing from the same hymn sheet then the vibe and warmth will usually win through. We have a great deal of time and respect for promoters who are trying to breathe life into the music scene. It’s a very tricky balancing act and that’s never lost on us. We appreciate and recognise the folk who put the work in and have tried to build good working relationships with them. To answer your question, it’s massively important. My advice would be to be nice to people; build friendships; work in tandem."

NICK: "Self releases are a good way of forcing the issue. You can’t expect a label to keep up with your every whim when it comes to singles and EP’s and so it’s a good way to keep things ticking over until the next LP or whatever. Holding stuff back to fit in with release schedules and PR can be massively frustrating and will often lead to the band having moved on from that material by the time everyone hears it. Just getting stuff out there with little fanfare can be quite satisfying and is an important way to get on people’s radar. I’d always recommend that.

For the more substantial releases, a label is always best. I try to think of albums as markers, finalising an era and being a snapshot of the sound that defined us at that point in time.

Bands need to be as pro-active as they want to be. It depends entirely what you mean to achieve. Certainly we’re not scared to hear the word ‘No’. If we were, we wouldn’t have worked with The Telescopes.

ZANI: "You've been on line-ups with Spacemen 3's Pete Bassman, had songs produced by Sonic Boom and Richard Formby, what was it like, technically, working with Formby? What different did he bring to the sessions ?(anything inventive or creative etc)

NICK: "Sonic didn’t produce us, he mastered for us. He offered up some advice with re-jigging certain limits in the sound delivery on the record and made minor edits to our own edits between tracks, but nothing more. Pete has a professionalism that is great to work with. You’re not waiting a fortnight for an email reply either. We wanted a sympathetic ear to master that record and that’s what we got. It’s pleasing to me to have some of his energy injected into that record too, after all the inspiration I’ve drawn from his work over the years.

Working with Richard was also a big landmark event for me. He produced the early Telescopes records, including Taste as well as his work with Spectrum. He was very hands off…hands off…hands off…now try this! He has an array of synths and keyboards in his studio (which I think has sadly had to move recently), and we toyed around with that stuff plenty. It was a great feeling to work with somebody who KNEW the sound of the band instinctively. He and Stephen are old friends and the understanding was clearly present between them. You felt you were with someone who was going to help make the very best of the material. I was also able to hear some studio archive material from various sessions he’s been involved with over the years. People aware of his catalogue will understand how special that was!

ZANI - Being a band that uses a lot of pedals, feedback etc, what type of equipment do you use and how do they contribute to creating this sound?

NICK: "We all use single coil guitars - pretty much exclusively Fenders, although for recording Byron and James (Messenger) dip into their attic reserves. I have a Fender IV as well which is great for helping to pronounce and accentuate certain rhythms and picked sections in our songs. Byron uses a custom built Dutton Amp. Our pedal set is ever evolving, with the only real ever present being a Boss Tuner to facilitate silence between live tracks and the odd dead stop. Wah’s have featured heavily for a few years now and I don’t see that changing any time soon. It’s easy to get carried away with effects and we’ve managed to stay well away from pedal boards up until now. We still do the punk thing and have them strewn across stage with wires everywhere"

One thing is for sure, One Unique Signal will forever be evolving, creating and moving forward. Who Knows, next year, maybe a US tour...maybe Austin, Texas?

One Unique Signal play the Reverence Festival, Valada, Portugal on the 29th of September; Psychedelic Revolution Festival on the 3rd of September and Paris on the 5th of September. They play Corby, in Kettering, UK on 26th September, with The Telescopes, The Anteloids and Thee Telepaths.