High Street Connections - With Clothes at the Top of My List


I was thinking today about how times have changed in retail since I bought my first Harrington and docs as a 15 year old back in 1978. I then recollect a year or so later having my first job (16 year olds with jobs , well some things definitely have changed) and buying my first crombie, then a tonic suit, followed by a boating blazer.


Then I thought, hang on they where all bought mail order. Back then we did not have the numerous shops that we have now, no such things as retail parks and the sort of clobber me and my mates wanted to wear was not going to be found in the mainstream shops on the High St.

At the time my first resort was The Last Resort in London, who where spot on at the time with Mail order. Fred Perry's and Ben Sherman's  where easier to get hold of, but more often than not they where bought mail order as well, from my Mum's Brian Mills catalogue.

So in that respect have times changed that much? It would appear not, most of the gear we stock is ordered by customers for delivery from ourselves, the only thing is Mail has been replaced by email and everything is much faster and the choices much more visible and accessible. 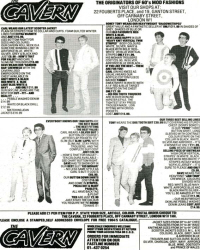 One thing that has changed is customer's level of expectation, companies like ourselves have to be spot on with service and we have to make it as easy as possible for customers to deal with us, otherwise we will lose valuable business to our many competitors, both online and on the retail parks.


When I think back to buying my first crombie from The Last Resort, I remember the filling in of the order coupon, which I think was in the NME or a similar magazine, posting it and then eagerly awaiting my order turning up about a week later. I remember the excitement of opening the package and putting the coat on for the first time, only to find that it fitted perfectly around the chest and shoulders, but was a full 3" or 4" short on the arms.

Did I send it back, what fill in yet more forms, post it back, wait another week, did I heck . I just developed a way of walking that involved hunching my shoulders up within the coat, much to the amusement of my Mum and Dad.

Its memories like these, that have helped to develop the way that we do business now. Our customers could order a Crombie on Monday have it on Tuesday, find it does not fit and still have hold of its replacement before they go out stomping on a Friday night.

One thing that has changed a great deal though is the great experiences I had shopping in our local open market. Our market was Tommyfield market in Oldham and it was always a hive of activity with loads of stalls selling really good clobber. Times where similar to now in that money was a bit scarce, so a tactic adopted my mates and me would be to take careful note of the styles of clothing worn by Paul Weller, Suggs, Terry Hall etc. and then hit the market and shop for the nearest thing we could find. The markets then where so vibrant that it never seemed to be a problem to find what you where after, and quite often the branded gear was GENUINE .

Footwear on the other hand seemed to be easier to get hold of, I can remember shopping at a couple of independent shoe shops in Oldham for Doc Martens, loafers, brogues, desert boots and Hush Puppy shoes. I think on reflection maybe we where just lucky at the time that we had a couple of decent independents in the town and maybe others where not quite as lucky.

I suppose ultimately that's one of the biggest changes, the High Street is dominated by chains and the best independent companies are found online.

Mick Harwood is the proprietor of Scoots Suits and Boots