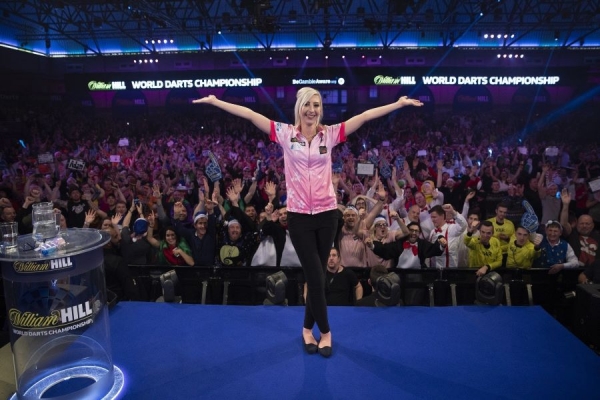 The Queen of the Palace Fallon Sherrock is familiar with breaking boundaries in darts, and she made more history recently by becoming the first female player to reach a PDC televised final.

Sherrock advanced through to the final of the Nordic Masters where she was beaten by Michael van Gerwen 7-11. She led Mighty Mike 6-3, but the Dutchman found his best form to win eight out of the next nine legs.

The world number five in the WDF rankings is 250/1 in the darts betting with Betfair to win the 2021 PDC World Darts Championship. If she can transfer her form into that event later this year, she could be set to better her achievements in the sport.

Nordic Masters Performance Will Give Her Confidence

The 27-year-old defeated Niels Heinsoe 6-1 in the first round in Copenhagen. She was then given a walkover into the semi-final as her last eight opponent Gerwyn Price was forced to pull out due to an elbow injury.

In her semi-final contest with world number five, Dimitri Van den Bergh, Sherrock was losing 9-3 but produced a fantastic comeback to prevail in a decisive leg 11-10. That success was one of the best victories of her career.

Van Gerwen was relieved to get over the line in the final against the Queen of the Palace. That was his first tournament win since the 2020 Players Championship Finals.

Prior to her run at the Nordic Masters, Sherrock’s most notable run in a PDC event came at the 2020 World Championship. She reached the third round of the biggest tournament in the sport before losing to Chris Dobey.

Sherrock was on her debut in the event at the Alexandra Palace in London and she stole the headlines when she beat Ted Evetts 3-2. Her victory in the second round was an even bigger success as she knocked out the number 11 seed Mensur Suljovic.

Although she was eventually beaten by Dobey in her third-round tie, Sherrock pushed her opponent hard. She won a lot of fans during her appearance in the tournament and generated media coverage all around the world for what she achieved.

What’s Next for Sherrock?

Sherrock proved in the Nordic Masters that she can compete with the best players in the PDC. She will be hoping to lift her first major trophy now and if she continues to have big results like she did in Copenhagen, that may not be far away.

The darts trailblazer currently splits her time between WDF events and PDC tournaments. She finished runner-up in the 2015 Ladies World Championship and she will be hoping to get her hands on a world title on either of those two tours.

The Grand Slam of Darts will also be an event Sherrock will be aiming to participate in. Last year Lisa Ashton and Mikuru Suzuki carried the flag for women’s darts in the tournament. Sherrock has yet to feature so it will be her debut in November if she books a spot in the draw.

Not only is Sherrock making history in the sport, but she is also inspiring a whole new generation of female darts players. We may not have seen the best from her yet as she has an exciting future in the sport.