The Zeitgeist of Australian Sharpies 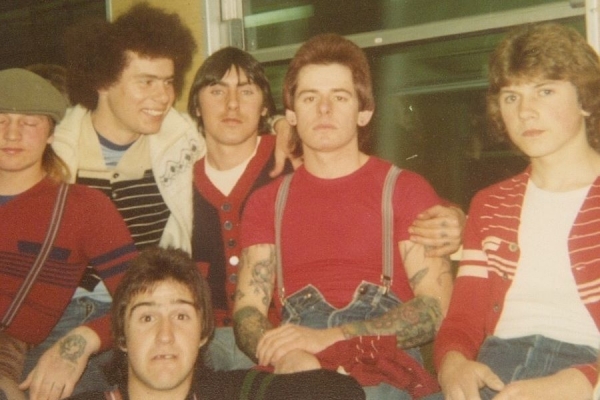 Between the 1960s and 1970s, an Australian youth subculture called the Sharpies (or Sharps). Cities like Melbourne, Sydney, and Perth all had groups of largely disaffected youth, who identified themselves by their ‘sharp’ dressing.

According to historian Julie Mac, many early sharpies and brushes (girls) were the next generation of Bodgies and Wedgies. However, unlike their parents, they wanted to wear quality clothes and cut about in made-to-measure Italian clothes with their hair worn short back and sides. Sharpie shoes initially had points, followed the 1960s trend for chisel toes in either suede or two-tone leather with a Cuban heel. Sharpies preferred loud, riff-heavy Aussie boogie rock.

By the late 1960s and early 1970s, sharpies' aesthetic included bright cardigans T-shirts, slightly flared high-waisted patterned trousers (flags or baggies) with twenty-two-inch bottoms. Flags were usually made to order with custom details such as the number and shape of pockets and sometimes the flag pattern featured on the shirt cuffs. Open-toed basket weave suede shoes (Treads) with soles made from old tires were considered ultra-cool, and handmade shoes were the epitome of style. Distinctive rat-tails hairstyles were worn mullet style, usually with the top and sides short. Arm tattoos were obligatory, and some wore an earring in their left ear. Young men preferred Banlon or Crest knit tops and tight knitted striped Conti cardigans (Conny). 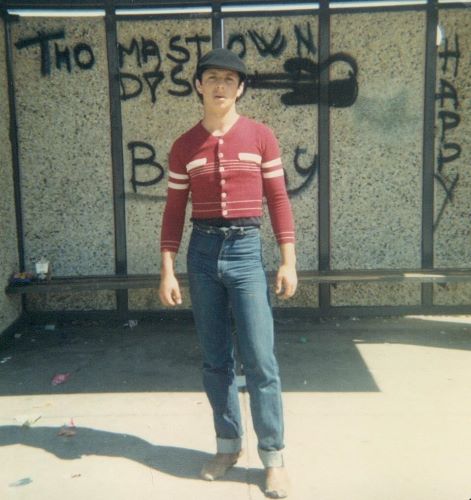 The much-loved slim fit Conny had a small belt buttoned at the lower back, usually with flapped pockets. Well-worn Conny’s became tighter until the sleeves just covered the forearms and became so short it looked like a midriff top. By the early 1970s, Sharpies had adopted regular straight-leg Levi’s or Lee jeans.

A significant number of new sharpies came to Australia from Britain with recent experience of Mod and Skinhead cultures. Most observers of social behaviour believe Sharpies sartorial and aggression mirrored the styles of other inner-city sub-cultures. Pre-skinhead fashion, i.e., ‘suede heads' in the UK, wore similar clothing to Melbourne Sharpies, making it almost impossible to gauge provenance and the need to accept a worldwide trend. 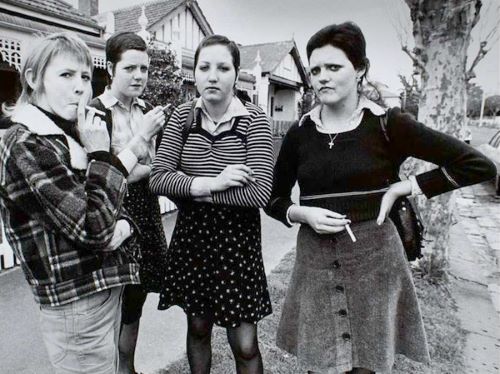 Sharpies congregated in large numbers at live town hall concerts and high school dances. Due to their sheer numbers, they were often perceived as untouchable by the police and left in many cases to their own devices, resulting in inter-gang fights and other criminal activities. At the time in Australia, there was a law which closed licensed premises at 6.00 pm. A common practice for drinkers was to order several drinks before closing them and skull them down one after another. This was known as the 6.00 pm swill. The downside was there were many drunk people out and about in the town streets, which attracted the interest of "Ne'er-do-wells." This eventually caused authorities enough concern to try to eradicate groups of juvenile delinquents. The press was quick to sensationalise and criminate. However, the sharpies could be a tough bunch; the media subsequently grossly exaggerated much of the reported antics. Sharpies did regard themselves as the arch enemies of Longhairs (Hippies), and bikers, and many gatherings were broken up with rowdy behaviour. Most were teenagers and young adults letting off steam. One particular exception was the leader of the Surrey Road gang, Mark ‘Chopper’ Read (1954 – 2013), who became a notorious career gangster and celebrated author.

Sharpies and Bushes had their distinctive dancing style called the “Sharpie Shuffle.” Confrontational in nature, groups of sharpies made a line, and sharpie shuffled across the dance floor to break into the long hairs doing the stomp. Ensuing mayhem would be a good excuse for a rumble.

One significant change to Australian nightlife after 1966 was clubs and pubs were allowed to serve alcohol after 6.00 pm, and many more venues became available. All wanted to feature live music, and the original Sharpies, now older, were drawn to those venues with live hard, tough rock’n’roll bands. Lobby Loyde and the Coloured Balls, Billy Thorpe and the Aztecs, Ted Mulry Gang, and Daddy Cool were significant crowd pullers. As the 'pub rock' genre grew in popularity, many Sharpie favourites became commercially mainstream as Melbourne woke up the benefits of a music industry.

The most commercially successful Sharpie favourite was Daddy Cool, and their Eagle Rock (1971) had a fantastic run in the singles charts, selling over one million copies in Australia. When Elton John heard it, he and Bernie Taupin composed 'Crocodile Rock' as homage to Daddy Cool during a tour. Crocodile Rock became an international hit, and to their credit, Bernie Taupin was photographed wearing a "Daddy Who?" promotional badge on several of Elton John's bestselling album covers. Sharpie music was now global, and in the promotional film (pre-video) for the 'Eagle Rock,' Ross Wilson is seen doing the ‘Sharpie Shuffle.’

Post Woodstock (1969), music festivals started to become an essential part of the Australian experience. Small townships like Ourimbah, New South Wales, played host to open-air festivals in 1970 and drew a crowd of 10,000 of the ‘young generation’ from all over Australia. Organised almost ad hoc local bands were featured while plain-clothed detectives wearing casual shirts and ‘double pluggers’ (sandals) mingled with the crown. Deemed safe by authority, more open-air events followed. The biggest took place at Sunbury Victoria in 1972. However, not all ‘peace and love, ' especially when the Sharpies turned up to hear Coloured Balls, Billy Thorpe & The Aztecs and Chain. 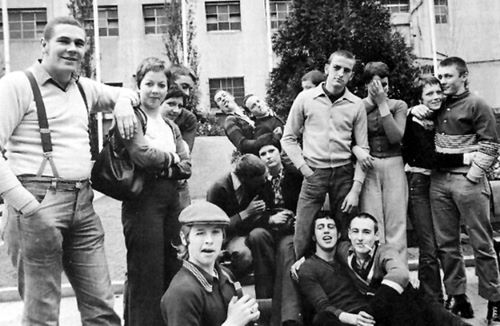 Nonetheless, Sunbury became an annual event until 1975, when the weather was so bad only a small crowd turned up to hear Daddy Cool and The Keystone Angels (‘The Angels’). To raise the festival’s profile, the organisers had invited international acts to headline the weekend. However, friction behind the scenes resulted in some local actions, including a young AC/DC withdrawing late from the bill. Only some acts received payment, and the organisers went quickly into receivership. A new band, however, took the Sharpies' interest, and they were called Sky Hooks.

Changes to the licensing laws in Australia and inner-city and suburban pubs like the Station Hotel in Prahran, Melbourne, wanted to feature live music allowed aspiring bands like a Black feather, Billy Thorpe & The Aztecs, and Buffalo. Now older sharpies could go to a pub, have a drink and listen to the bands. New bands like AC/DC, Cold Chisel, and others honed their stagecraft in pub rock. As the genre expanded, hundreds of hotels in capital cities and major towns across the Big Brown Land began providing regular live music, often for free. Most bands hardened their sound to straightforward rock, emphasising drums, bass, and simple guitar riffs. Bands could now tour, which gave them greater exposure and no longer just local heroes; they became Australian Rock Bands, ready to take on the world.

Out of nowhere in the mid-1970s, a group of young Scottish lads appeared on Top of the Pops (UK) wearing Sharpie-inspired gear with tartan embellishments replacing plaid and pinstripes. The Bay City Rollers became a worldwide sensation with their millions of fans dawning tight jumpers and flags edged in tartan. When they toured Australia, they were treated like the Beatles with mobbing fans. Sharpies may not have liked their style of music, but now sharpie gear was being worn by kids from Collingwood to Edinburgh and London to New York. 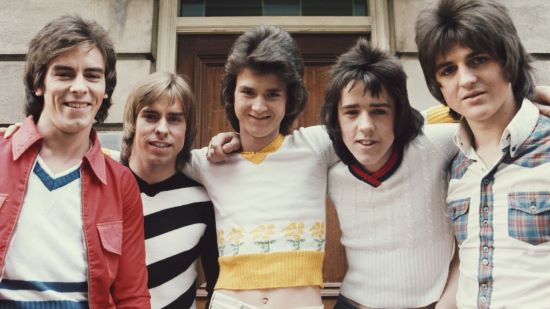 In the early 1970s, when Glam Rock became popular and bands began to tour Australia, younger Sharpies were keen to see Slade, Suzie Quatro, David Bowie, T-Rex, Skyhooks, and Hush. Gradually many began to follow the glitterati while others were drawn to the emerging Punk Scene. Alienated at first, the diehards kept the Sharpie ways, but many ex-Sharpies successfully crossed over into this new genre of music, fashion, and politics. La Femme was a Punk band made up of former Sharpies and became the focal point of Melbourne's Punk/New Wave scene. By the end of the decade, the Australian Sharpie movement was over. 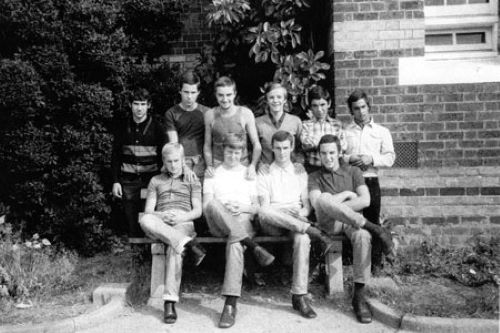