Silk Blades -And A Short Sharp History Of The Neck Tie 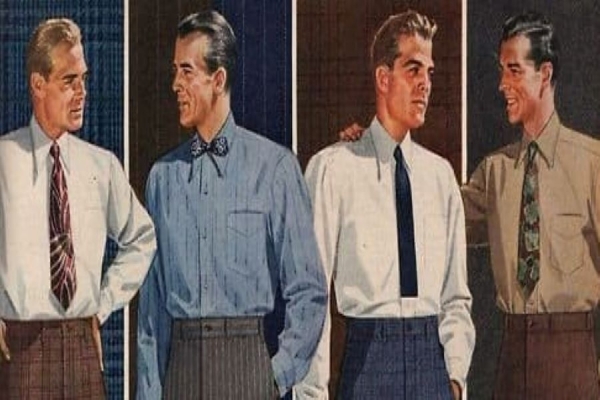 There was a time when no outfit was complete without a tie. It adds class and sophistication to ones look. But, have you ever asked yourself why we wear ties?

They don't keep us warm or dry and they certainly don't add comfort. So why do some people love wearing them? I have taken it upon myself, to find out more, for I am actually one of those that likes wearing a tie, whereas it seems the majority of us don’t unless it’s a particularly formal occasion where it is usually expected. Neckties, bowties, scarves, and cravats — neckwear is, without doubt, one of the most fascinating elements of men’s apparel. With just the change of a tie, a man can alter his persona from 1920s gangster to 1950s rebel to a 1960s ad man. Just at a first glance through 20th-century men’s tie history, you may think a tie is a tie is a tie, but with a keen eye on the subtle differences between colours, patterns, fabrics, and size, much more can be revealed. 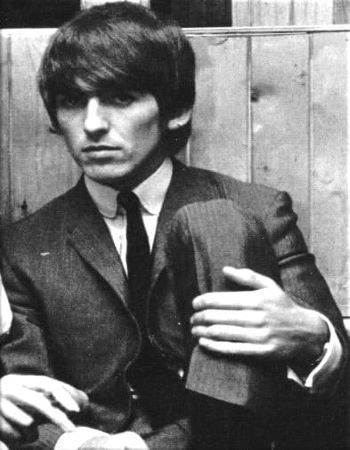 During the 30 year war in France. King Louis XIII hired Croatian mercenaries, who wore a piece of cloth around their neck as part of their uniform. While these early neckties did serve a function (tying the top of their jackets closed), they also had quite a decorative effect – a look that King Louis liked a lot . In fact, he liked it so much that he made these ties a mandatory accessory for Royal gatherings, and – to honour the Croatian soldiers – he gave this clothing piece the name “La Cravate” – the name for necktie in French. 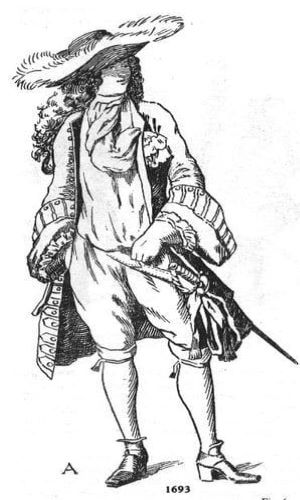 The early cravats of the 17th century have little resemblance to today’s necktie, yet it was a style that stayed popular throughout Europe for over 200 years. The tie as we know it today did not actually emerge until the 1920s, and since then, it has undergone many (often subtle) changes.

During the early twentieth century, and most of the 1920s, men’s neckwear came in such a variety of colours, shapes and styles, that it could be considered the best era for men’s ties. It was also the start of the modern necktie as we know it today.

Previously, the bow tie was very popular for daywear with popular patterns of horizontal stripes, checks and polka dots in light pinks, purples, greys, and greens. Neckties, too, were full of colour from the “club” or “regimental” striped ties – which started in Europe to the gold-toned paisley prints that were especially popular in the USA. All-over prints of stripes, checks, and diamond patterns also reigned supreme in Europe during this time.

Neckties were thin — about 2 and 3/8 inches — and made of very fine silk. The quality of the man was often judged by the quality of his silk tie. 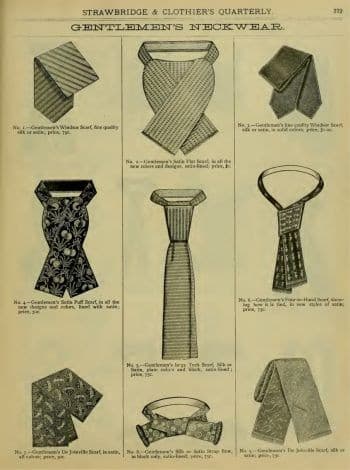 The knitted tie also appeared in the 1920s, usually with a squared end. This style is one that has come and gone over the years. Probably the most popular era for such a tie was during the 1960s.

Getting back to the 1920s, as styles developed, so things began to change. By the thirties, scarf ties and bow ties were quickly becoming less fashionable, leaving only the silk necktie to dominate. Multiple colours of horizontal stripes, checks, paisley, large dots, pin dots and Art Deco motifs clashed with men’s shirts. It was wild and colourful, and made great statements about the wearer. 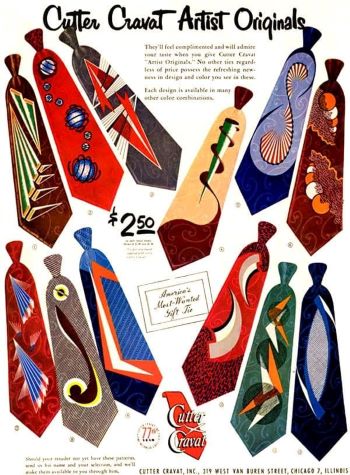 Hand-painted Art Deco designs started in the 1920s but really found a place in the 1930s. Famous artists would hand paint ties as a way of bringing art into everyday life. Necktie widths grew wider (about 3.5 inches) and shorter to go with the wider suit lapels and the oversized shirt collars of the ’30s.

When wartime struck, so did restrictions on men’s ties. Silk was in short supply, so rayon and wool knit ties were the thing to buy. Shortly after WWII, men’s ties took a radical shift in style. No longer confined by fabric rationing, men’s ties got wide — very wide — and short to the point of ending above the beltline, which was already high on the waist. These have eventually become known as Swing ties, as the popular music of the 40s was the Jazz style called swing. Hand-painted ties were still popular, and the way geometric, curly lines, monograms, and Art Deco style patterns were painted in bright colours of blue, red, gold and brown. Animals, plants, flowers, birds, western, and tropical printed themes were everywhere. Hand-painted ties were actually often themed around the wearer’s hobbies and interests, such as - painting, fishing, sailing or hunting. Hand-painted ties needed a large canvas, so naturally, neckties grew in size and became 4.5 to 5 inches wide. They were given nicknames such as “scrambled egg ties” because of the mix of muddled circles and darts the patterns created. Stars such as Bob Hope would often wear these styles of ties, and because they were wider, they also became known as “Belly Warmers.” 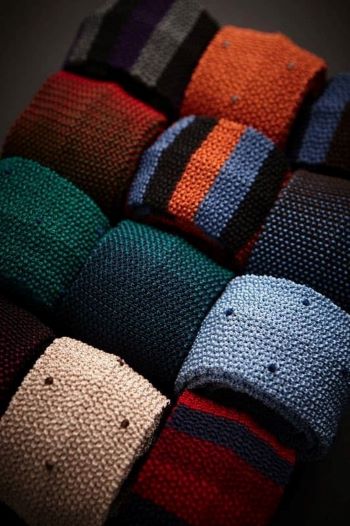 The painted tie continued to be popular in the early ’50s. The designs became more abstract, cubist, modern, and artistic than the ’40s designs. It was less about the hobby and more about a play on colour, shape and stand-out designs. These days, they are highly collectable now.

Wide ties gradually narrowed again by the mid-’50s to a “normal” width of about 3 and 1/8 inches. Bow ties, too, slimmed down and straightened out into the skinny ribbon tie. The conservative look was in with businessmen in grey flannel suits, Oxford shirts, and a graduated striped tie. Neutral ties with light patterns were also common. Young kids were wearing knit ties on college campuses, a trend last seen in the ’20s. It wasn’t the pattern or colour that was big news in the early ’50s, but the material. Among traditional silk and wool, men could now find the latest synthetic Dracon knit, which offered a noticeable texture on solid colours. Other textured materials like coarse silk and shantung were trending in the mid-’50s in America. 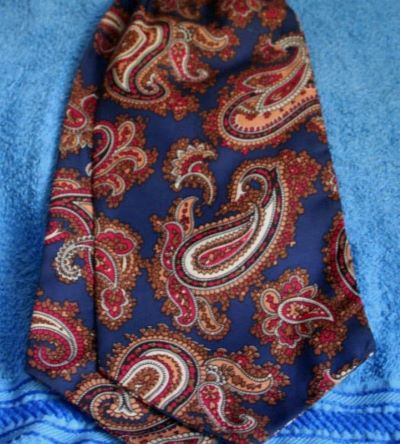 Ties kept on getting narrower as we move into the 1960s when the ultra-thin 2-inch skinny-tie came in vogue to go with narrower silhouetted suits. Solid colours and striped designs were preferred in most ’50s business attire, while mod art designs reigned in the ’60s. Both traditionally pointed neckties and square end ties had their place. Pink, purple, yellow, and aqua colours were seen with large geometric shapes, wide stripes, and square dots.

In 1964 the silk ascot returned in solid colours, figure prints, and Mod patterns. They were worn tucked into unbuttoned shirts. The puffed ascot look was very chic and quite big for the time. That is until 1968 when the wide tie returned bigger than ever. Most ties were 3 and 3/4 inch but they could go up to 5 inches with big knots that needed a wide-cut collar such as the spread to accommodate them. This enormously wide tie was called the Kipper tie, created by Michael Fish. The kipper tie was huge and came in bold colours, small feminine prints, and psychedelic swirls. It was meant to stand out and give the wearer true personality. The Kipper tie was literally the biggest thing to happen to men’s neckwear in decades. 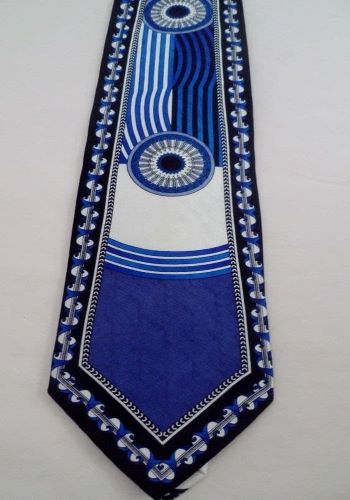 In formal wear, the big necktie inspired the full butterfly (club bow) or semi butterfly bow tie both in traditional black, midnight blue and the new white pique. These bow ties usually had square ends, which were a neater appearance against the simple tuxedo. These were contrasted with the very skinny ribbon bow tie and thistle tie. There was also the velvet tie trend in Britain. The 60s couldn’t make up their mind on just one look.

If you like crazy patterns, then ties of the 1970s are for you. The earthy tones and plant life, large paisley and animal prints made of wool and polyester materials gave the ties a new texture. Once again ties expanded to about 4.5 inches wide, but longer this time, as trousers were worn lower on the waist, and in some cases on the hips. The inspiration was taken from ’40s American ties, but this time the patterns were rainbows, swirls, and clouds in pastel hues.

One popular new tie in Europe was the neckerchief. A square silk scarf was tied around the neck and held in place with either a square knot or a tie ring with ends pointing to the sides. The hippies wore their neck scarves loose without a pin so as not to be confused with an actual necktie. 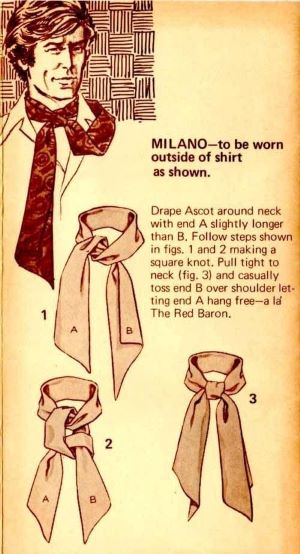 The rise of the no-tie was the trend for the ’70s and would have continued had the conservative ’80s not brought the rebellious youth back to society and into business suits, and power suits, once again. Influences from previous eras were evident, and the cyclical fashions gave to different looks depending on individual tastes. In contrast to the businessmen wearing loud, and often reasonably wide Paisley ties, you would often see young men wear very narrow ties. Sometimes these were even made of leather. Especially, as a Mod revival became popular amongst youth culture. Pop stars would also wear narrow ties, and you only have to see The Jam, and Paul Weller, to see how much influence the look with narrow ties had on a new generation getting into style. Funnily enough. When the Jam first started Paul Weller hadn’t fully transformed into the Mod icon he would become. There are some photos of him with a long early 1970s hairstyle, black shirt and a very wide tie with a Windsor knot. But, as he studied his craft and cottoned on to the whole sixties Mod thing, but, with a late 70s Punk edge, so he dressed not unlike Modern Jazz musicians of the 50s. Black suit, white shirt and narrow tie. Although, Paul’s main influence was actually The Beatles, and their own take on the style, and a sharp modern look. 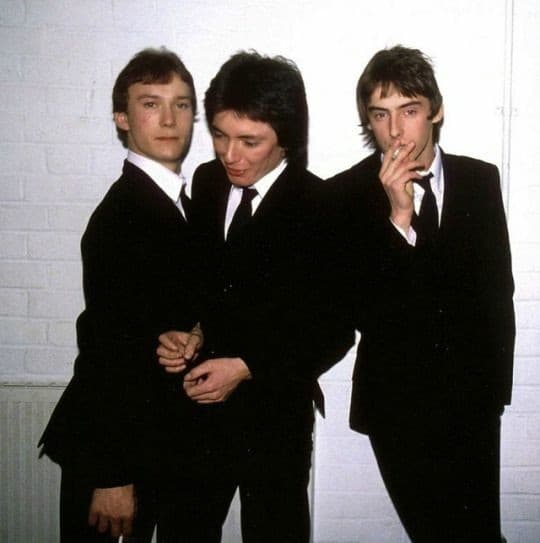 As we move away from the 80s - ties became a bit more muted and more of normal width. By the Noughties we see ties getting narrower again, and a reappearance of the knitted tie. Today, fashion is about individuality, so anything goes when it comes to ties. Vintage and hipster styling has seen a re-emergence of ties of all widths, styles and fabrics. In fact a couple of years ago I even saw and advert for a wooden tie! (thankfully the gimmicky style didn’t catch on.)

Today, in the workplace, ties are rarely worn, and the usual occasions to wear a necktie are those more formal events where it is usually expected. They are seen as a respectful nod to old conventions and are still De rigueur at such events. But, there are still those who see a tie as a piece of clothing that not only elevates one’s outfit, but actually says look at me, I am about style. Advertising and fashion will still often show a person wearing a tie, it is still expected to be worn by male newsreaders for example, and the wearing of a tie is a tradition that is unlikely to completely disappear especially as they do have a use, for they can flatter a person’s shape when worn properly, drawing the eye and giving the sharpness that you would expect from a sharp vibrant blade of silk. 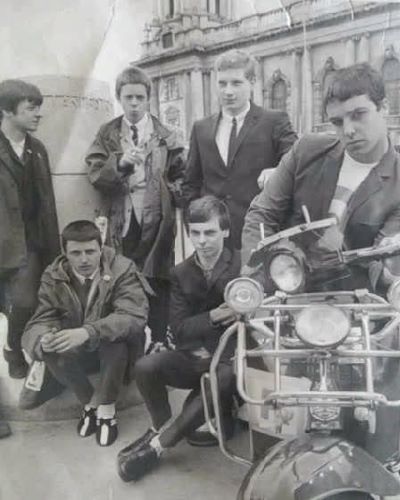