Don’t be Stingy – Tell Me About The Pork Pie Hat 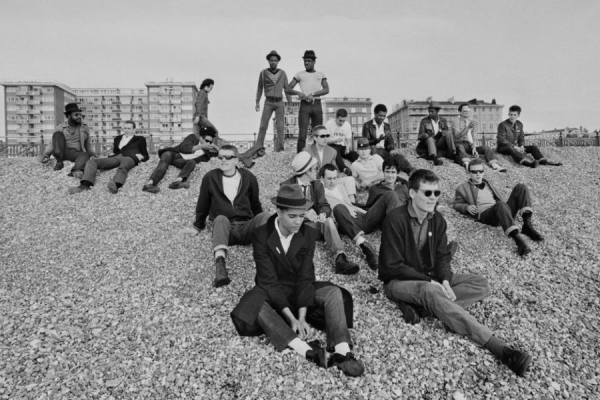 I am a fan of hats, I probably have too many, after all, I only have one head. But for me, a good chapeau can make a person stand out in a crowd. It can elevate their style, and can help a person exude a confidence that is admirable. Now, I am talking about real style. Not just a functional thing to put on one’s head to protect yourself from whatever a person feels their noggin needs protection from.

Today, although many people will don a hat of some sort, it isn’t a requisite for everyday life, unless it’s part of a working uniform. Hats go in and out of fashion all the time. The period of that feeling of not being dressed properly without one has almost been consigned to history. In this article, I am going to write about a few of the styles of hat that are still relatively popular, and have been considered as emblems of cool. First, there is the Pork Pie, and then there is the Stingy Brim Fedora, and it’s similar-looking cousin the Trilby. 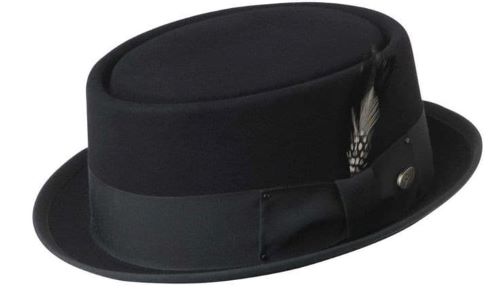 The Pork Pie hat came into fashion approximately around 1830, and was first seen on the heads of American and English women and remained in vogue through the period of the American Civil War. In the early 1900s, this style changed gear and was seen on fashionable men out and about in town in Britain. American men, often enamored by British fashions, soon adopted the pork pie style in the 1920s thanks to silent film star Buster Keaton, who wore them in many of his films. The popularity of the pork pie then continued to grow, through the American Great Depression until the end of World War II (when it topped many a zoot suit). It still remains popular within African American jazz, blues and ska music culture today, where it has retained many of the ‘cool cat’ associations it achieved throughout the 1930s and 40s. 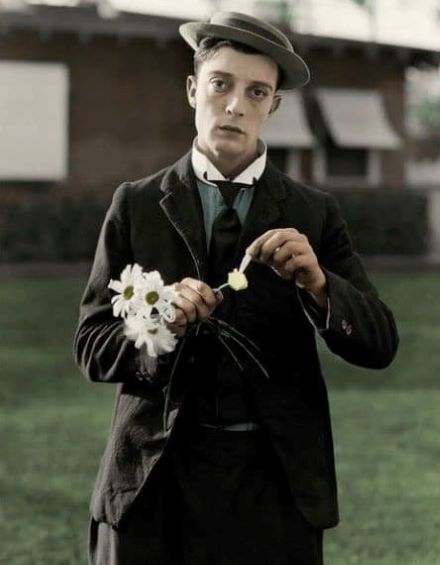 The name “Pork Pie is, logically as it suggests, is because the hat looked like a pork pie sat on a plate, which was something seen regularly during the 19th century in the windows of most bakery’s in England, during that period in history.

Although, in the second half the twentieth century its popularity began to decline, and the Pork Pie became considered as part of a particular look – that of the aforementioned Zoot Suit, and it’s adoption by the African American music scenes, such as Jazz and Blues. It’s association with cool music styles meant that this particular style of hat has remained an emblem of cool styling. 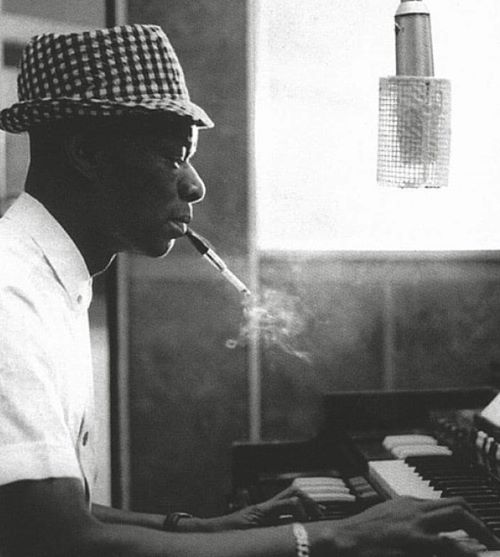 The death of Jazz saxophonist Lester Young (who, often wore a Pork Pie hat on stage) saw, Charles Mingus, the Jazz musician, and composer, compose an elegy for him called “Goodbye Pork Pie Hat”. But, this was not the end of the style.

Between 1951 and 1955 this hat was seen on television as a part of the wardrobe of many celebrities such as Art Carney and Joaquín Monserrat.

In Jamaica, during the 1960’s it was popular as part of the “rude boy” street style, and subsequently, thanks to the links in Britain with Jamaican communities, we also see the Pork Pie hat brought back to Britain and gain popularity again in the country. 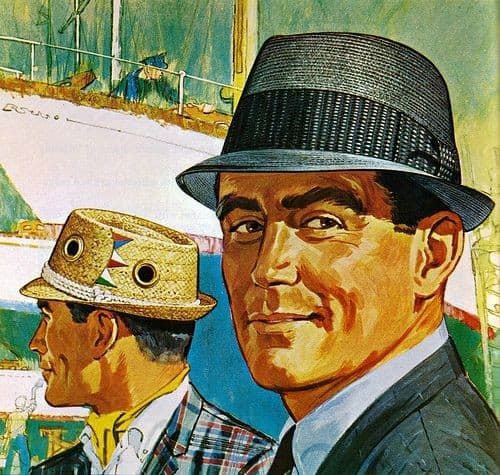 After the 1960s, Pork Pie hats would reappear in popular culture in various manners. Yogi Bear wore one in the popular cartoon. Gene Hackman wore a Pork Pie hat in the 1971 film The French Connection and in 1973 Robert de Niro in the movie “Mean Streets”.

During the 80s many pop stars would incorporate the Pork Pie into their celebrity outfits, as some fashions from the past became popular, albeit in often exaggerated ways. You only need to look at Kid Creole and The Coconuts, with August Darnelle in his Zoot Suits and hats to see how inspiration from the past was used and sometimes reinvented. Throughout popular culture since, they can be seen in photo shoots, in magazines, in music videos, etc. More recently we saw the main character from the TV drama Breaking Bad wear a black Pork Pie hat, and the style is one that seems to remain popular, albeit not as popular as the Fedora and Trilby. 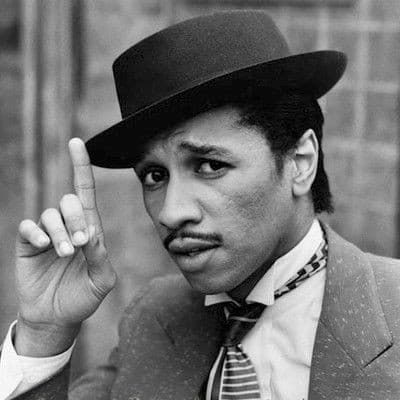 No two hats are mistaken for one another so much as the Fedora and the Trilby. Nor have two hats ever stirred up so much controversy as these two hats. This confusion and controversy, however, are by and large because of a lack of understanding over what a fedora and a trilby are, what their shape is, and the best way to wear either of the hats.

The fedora is a hat that can be first found mentioned in the last years of the nineteenth century, and is not just part of the same hat tradition as the slouch hat of the mid-nineteenth century and the homburg of the late nineteenth and early twentieth century, but also their natural evolutionary descendent. Popular from its inception until the popularisation of hats in the ‘70s, the fedora remains a classic hat.

The great popularity of the fedora arises from the fact that it can be both a casual and a dress hat, and the materials from which it is made reflect that. Wool felt and fur felt are both popular, and most fedoras shown in film are wool or fur felt, but straw, especially Panama Straw and raffia are good for summer wear. 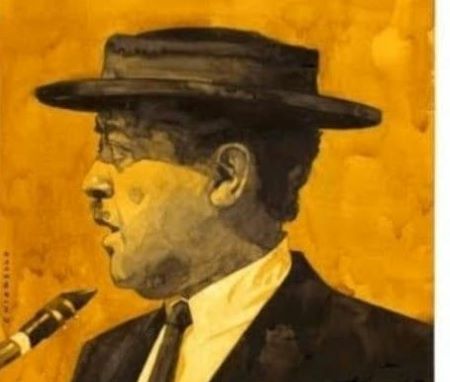 .
A high quality material and construction for the fedora is a must. The crown is usually four or four and a half inches, with a pronounced “pinch” in the front of the crown. A fedora has either a “teardrop” or a “centre dent” crown, and these ornamentations are pressed an inch or two into the crown of the hat. Although a short, or “stingy”, brim has been popular from time to time, a classic fedora has a brim between two and two and a half inches. A wide, or “generous”, brim of three or more inches has also become recently popular. The brim is always a “snap” brim, meaning that the front or the front and back of the fedora can be snapped up or down, for styling or to protect the wearer from the elements.

Available in practically any material popular for hats, the Trilby is a naturally more casual hat, and as a result tends to be made from more inexpensive materials such as cotton, straw, raffia, and wool felt. Unlike the fedora, which has a movable, or “snap” brim, the trilby is made so that the brim is permanently fixed down, and usually, the brim is set at a much more severe angle than the fedora. The crown of the trilby is the most identifying feature and is angled inward more from the brim to the crown than the fedora, and the crown itself is either much taller but usually much shorter than the fedora. Like the fedora, the trilby does have a “pinch” and either a “centre dent” or a “teardrop” crown, but unlike the fedora, all of these features are much less pronounced, almost to the point of nonexistence in some cases. 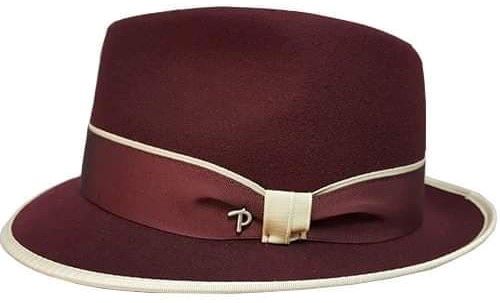 The trilby is a hat first popularized by a hat worn in a certain stage adaptation of George du Maurier’s novel Trilby, and the name stuck. It was not immediately popularized, but rather was worn as a “rich man’s” hat in the early part of the twentieth century, and then mostly only in Britain. The Trilby hat didn’t resurface until the ‘70s when it appeared on the popular scene as part of styles that harked back of perhaps two decades before, but it disappeared again, along with the popular wear of men’s fedora hats and hats in general. The popular use of the trilby again resurfaced in the very early twenty-first century, and it was from the trilby’s use than that the confusion between the men’s trilby and the men’s fedora began.

What mostly sets the two hats apart is how they are worn, and it is the confusion about how these two hats are worn. As can be seen from its history and evolution, the fedora is a much more formal hat, but like a brogue shoe in modern streetwear, it may be dressed up or dress down gracefully. The trilby, meanwhile, evolved from sportswear and trends and is strictly to be worn casually. Badly worn Trilby’s are frequently misidentified as a fedora, and the mistaken identity has caused the classic fedora some unfortunate public relations pain. Both the graceful men’s fedora and the cool trilby are great looks, but each in a distinctive class unto themselves. Like the Pork Pie, Fedoras and Trilby’s have been seen throughout popular culture over the decades. Especially in association with music and film. You only need to look at the likes of Frank Sinatra, in what can be also termed these days as Mad Men Chic (Popular TV series based on the height of advertising in Maddison Avenue), Nat King Cole looking sharp, or fictional figures played by actors such as Humphry Bogart, and Robert Mitchum in Film Noir movies wearing Fedora’s to appreciate the styles. 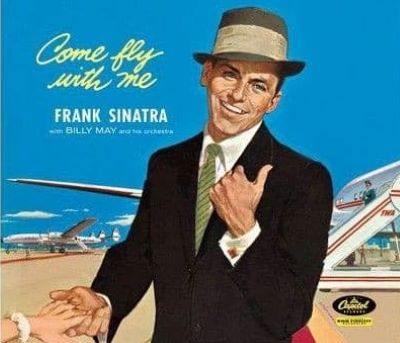 When Two-Tone became popular in Britain, so the association with style was evident. Often monochrome, the wearing of a stingy brim fedora or a trilby was commonplace by the bands and the audiences alike. Again, Two-Tone acknowledged the Rude Boy look, the Trilby or stingy brim Fedora were most likely easier to find than a genuine Pork Pie hat in Britain at the time, or at least in the working class urban environments of the Midlands where Two-Tone really evolved. Hats can be an extension of personality or something to help shield and disguise. Classic looks are often returned to, because of their associations. When watching a series such as the aforementioned Mad Men, and I see Don Draper immaculately attired from head to toe, I appreciate the sharp style, just as I like the style of classic adverts by Knox in The Ivy Look by Graham Marsh and JP Gaul. I love looking at pictures of Jazz and Blues musicians, whether it be on an album cover, in a book or on a screen. I identify hats as being part of every well-dressed man’s wardrobe. Especially if the style complements the attire and emphasises a sense of cool.
Here for now, I sign off, and tip my hat and bid you all adieu - until the next time. 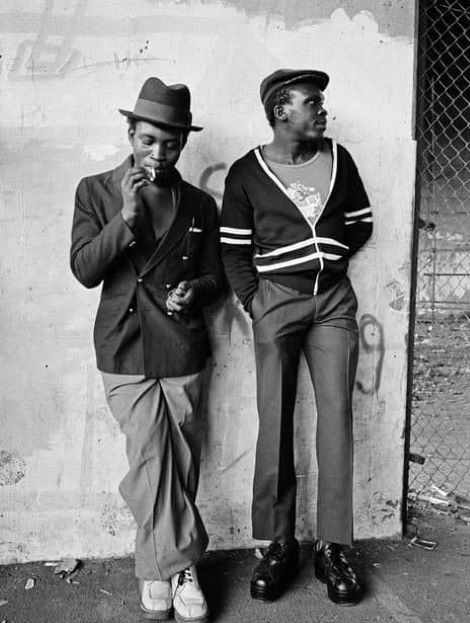