The Place I Love – Lake Garda on ZANI 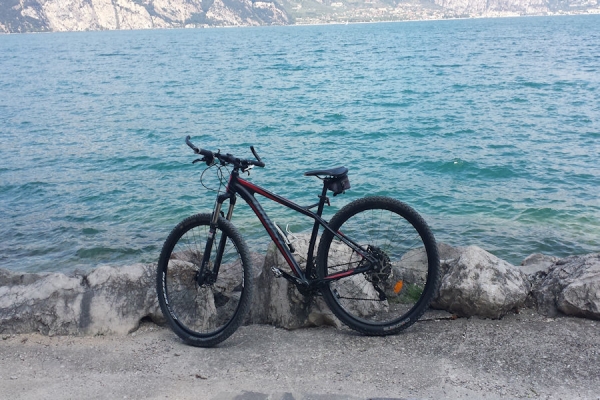 Since 2012 Lake Garda is my holiday destination of choice, a place that I find exhilarating, fascinating, refreshing and heart-warming. These feelings are aroused the moment I step off the plane at Verona Airport, as I become engrossed with an overwhelming feeling of serenity and stimulation. Poetic as it sounds it is hard, if not impossible, to be drawn into a magical, mystical and even spiritual frame of mind.

Yet I am under no illusion that I have entered a peaceful Utopia, nor am I under the influence of any mind-bending drugs. Perish the thought of going through Customs at Gatwick Airport in an alternate state. However, my hedonistic youth is well and truly a distant memory, which is certainly a good thing as more often than not, I get stopped by those good old boys and girls protecting our borders, making sure no contraband enters or leaves the UK. I am so used to being stopped by now that when my hand luggage comes through the conveyor belt without it being pushed to one side for closer inspection by HM Customs and Excise I almost feel a little letdown

I have grown accustomed to Customs and Excise officers swabbing the inside of my hand luggage, asking me to step away from my bag in quite an aggressive manner, making obvious eye contact as their long-term memory taps into their revised edition of Desmond Morris’ Manwatching: A Field Guide to Human Behaviour, as they are clearly analysing my body language, as they ask me where am I going, did I pack my own bag and such like. Once the officers have completed the swab, they walk to a machine to examine the results all the time keeping their beady eyes on me, hoping and praying, that there is a loud bleep with a red-light flashing. I remain calm, as I know I have nothing to hide, nor have I partaken in the consummation of any drugs. Furthermore, I believe Customs and Excise officers relish a hostile reaction, I feel they want us to get annoyed, so they can delay us further, but not me, always smiling. The look of disappointment on their face when their precious machine indicates that I am totally and utterly 100 percent drug-free and not a terrorist. The Customs and Excise officer has no choice other than to let me go about my business and wish me a safe journey. After this minor inconvenience and amusing encounter, the holiday mode starts to the kick in, as I wait in the departure lounge whilst I engage with fellow travellers about their destinations, and other vibrant conversations. 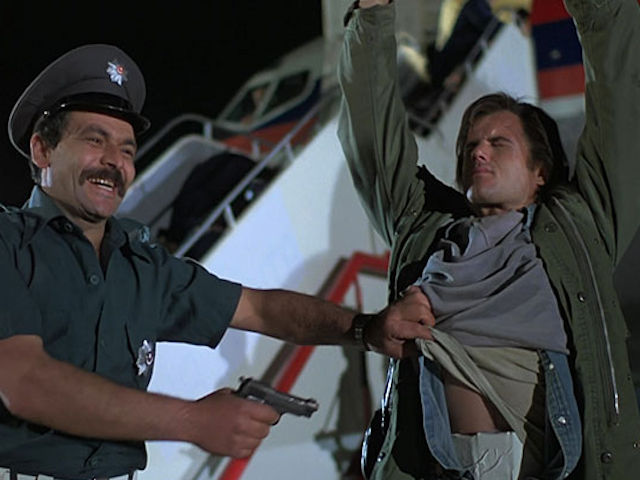 As for Verona, I am usually greeted with a smile by the Italian Customs and Excise officers as I leave Arrivals into the warm sunshine of Italy with exhilaration. I wait with a smile for pre-arranged transport or a bus to my hotel, either form of transport always guarantees me a picturesque and stimulating journey.

The two harbour towns I stay in are Malcesine and Sirmione, both scenic, charming and laced with history. Both towns boast two stunning castles, Scaliger Castle & Castello Di Sirmione, open to the public with museums that give you a better understanding of Lake Garda. Each castle offers spectacular and panoramic views of the lakes, that leaves you bewildered as you gaze into the clear water and the surrounding mountains. Both Malcesine and Sirmione have beautiful open ports, cobbled streets and piazzas that are littered with bars and restaurants, offering the finest in Italian cuisine and also with many restaurants providing traditional German food as Lake Garda is tremendously popular with the Germans who, contrary to popular belief, are not rude or arrogant. Just like everyone here, the locals, the workers and the other tourists, the Germans are just enjoying it. 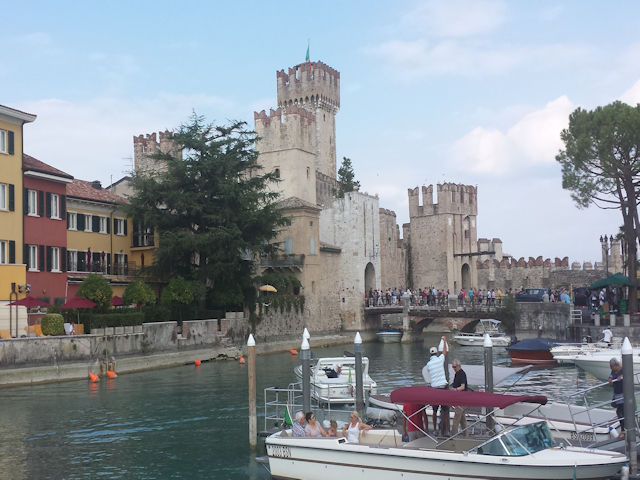 I was and still am pleasantly surprised that eating out is not that expensive in Malcesine and Sirmione. Yes, there are expensive restaurants, yet most are reasonably priced with no hidden surcharge, but If in doubt, ask before you dine.

Aside from the historical centres of Malcesine and Sirmione and their respective castles, which you can do in a day, even half a day, there are many walks and bike rides, sporting activities, involving the mountains and the lake, from paragliding to mountain biking, boat rides, day trips to Venice and Verona, and other harbour towns to explore, either by foot, bus, car, bike or boat. In Malcesine, I always hire a mountain bike for two days, and cycle along the coastline as far as I can go. Yet there isn’t a cycle or footpath that goes around the whole of Lake Garda, and I lack the confidence to cycle on a road full of fast Italian drivers although there are many cyclists that do go on the main roads and come back in one piece. 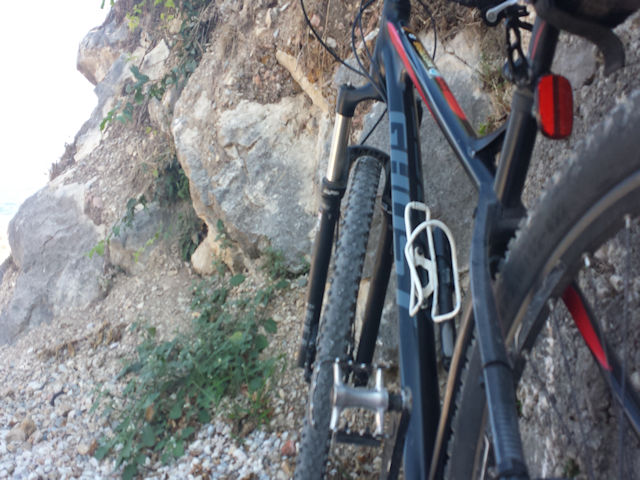 One of the main sights of Malcesine is Monte Baldo, a mountain behind Scaliger Castle, that offers the most incredible views of the lake and beyond. There are two amazing traditional Alpine restaurants at the top, along with a flock of lamas. The quickest and safest way to get to the top of Monte Baldo is via the cable car, the journey is cheap about 12 Euros, it takes about 15 minutes, and you are always about 20 feet above ground, due to the slope. But get there early as after lunch, especially in peak season, there are long and crowded queues.

I’ve only been to the top of Monte Baldo once because to be honest, at first, I bottled it, as I am not a great fan of heights. Then bang one morning full of grit and determination, I boarded the cable car. However, I didn’t have a poker face on the cable car, so my fear of heights was easy to notice, which the fellow passengers, mainly Germans, found highly amusing no end. So, when I left the cable car I was met by a bit of light-hearted teasing and laughter, which made me chuckle, all in good humour.

After exploring the top of Monte Baldo, and taking in the once in a lifetime sights, I decided to walk down the mountain to Malcesine. I didn’t have a map, just followed my instinct, but halfway through my walk it did occur to me I might get lost, never to be found again, yet I just reassured myself as long as I followed the sound of faraway traffic, and focused on certain landmarks, I will get back to my hotel. It was just me being dramatic. It took me four hours to complete the journey, and the final hour was a little hair-raising as there was a heavy storm, making some of the stone pathway highly slippery, even though I was wearing hiking boots, I did find myself on all fours for a while, much to the amusement of two possibly local Italian girls, who passed me with ease and delight, as they saw me crawling along like a wet stray dog. Nevertheless, despite all this it was a wonderful walk, which I plan to do again sometime soon. 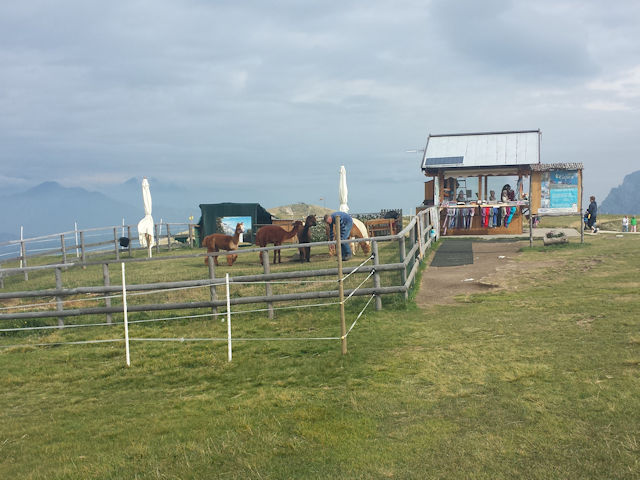 Sirmione is slightly smaller than Malcesine, yet there is more accessibility via buses to other harbour towns, but the walk that is worth doing, no, in fact, it’s a must, is the walk to the Roman villa along the coastline. The ruins are vast, and you don’t have to be an historian to appreciate them, just a lovely walk and sight, that inspires you.

As for accommodation in Malcesine and Sirmione, you can easily find value for money, ranging from 70 to 120 Euros per night, some do a nice cash discount, if you book via their site and not Hotel.com and such like. If hotels aren’t your thing, there is plenty of Airbnb accommodation, and good old-fashioned camping, which is popular with the Germans. Malcesine has about three to four supermarkets, all offering what you would expect from a supermarket along with a fine selection of Italian foods, I am sure you know the assortment, from Gorgonzola to Prosciutto. If you are a smoker be sure to top up from the local tobacconist, as none of the supermarkets sell tobacco, which is common throughout Italy, Spain, Portugal, etc.

The historical centre of Sirmione doesn’t have a main supermarket, so you have to go to the industrial part of Sirmione, which is a short 10-minute bus ride or 30-minute walk. What Sirmione does have, is a souvenir shop cum mini supermarket. Everything, from a bottle of beer to a Sirmione tea towel, is well overpriced. The owner, whose name escapes me, is certainly doing well, in his designer clothes, crocodile skin shoes and flash watch, and who tells me he usually travels the USA after the holiday season at Lake Garda is over. I asked if business is doing well, he replies I am making an honest and humble living, as he puts a huge roll of 50 Euro notes in his trouser pocket. 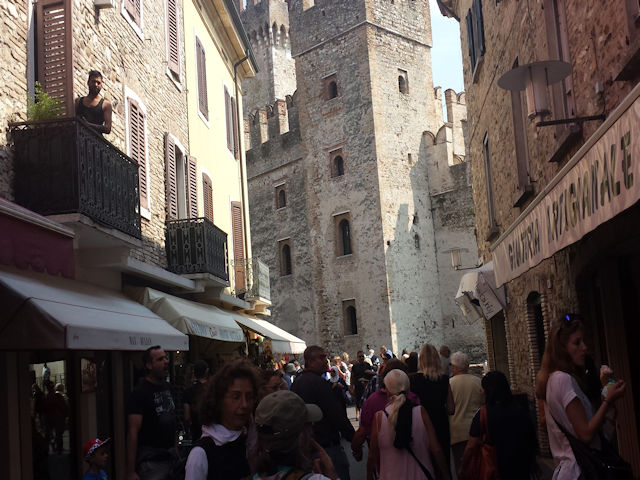 As for the night life, hmm, if you want to dance till dawn, no, you’ll have to go to Verona. There are one or two bars in Malcesine that stay open late, and one by the lake in Sirmione. Both towns are fairly quiet by midnight, and that’s part of their appeal. I have never ever had any trouble in Lake Garda, but please bear in mind, Verona is the main football team around these parts and they are the team with the biggest hooligan element in Italy. So many of the local lads around Lake Garda, especially in Malcesine, are born and bred supporters of I Gialloblu (The Yellow and Blues), so just don’t get too loud, because they are around, enjoying the splendour of their town.

Lake Garda has been, and still is, a favourite destination for writers, such as Johann Wolfgang von Goethe and D.H. Lawrence, who wrote, “The mountains are dark blue... the sky glistens... the light burns gold”. Along with artists, historical figures have found solace in Lake Garda, from Benito Mussolini to Winston Churchill. It is rumoured that Mussolini buried some treasure in Lake Garda. Even Theresa May holidays here, but please don’t let that put you off. As a writer myself I don’t write when I am here because I do not want to engage in any form of working, as I know I won’t leave my hotel room once I start. No, I just want to absorb and appreciate my surroundings, and feel refreshed and ready for battle when I face Customs and Excise again on the return part of my journey. 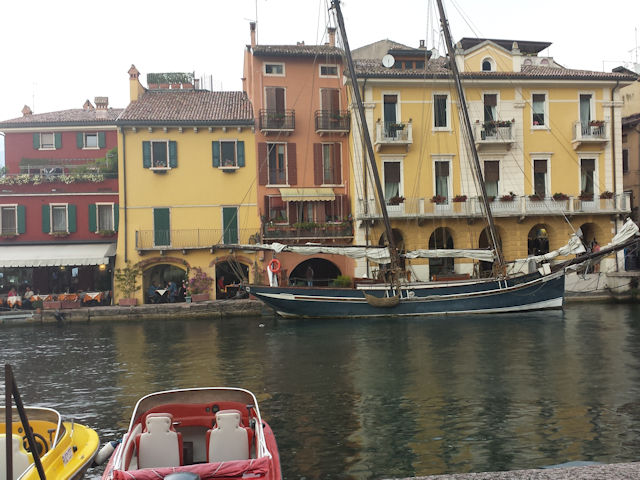 There is so much to write about Lake Garda, so much. I just wanted to pen some words, feelings and experiences I have had from Malcesine and Sirmione, without mentioning specific hotels, restaurants, bars and other sights. The joy in travelling is discovering them for yourself, and that is what I have done, making Lake Garda The Place I Love.