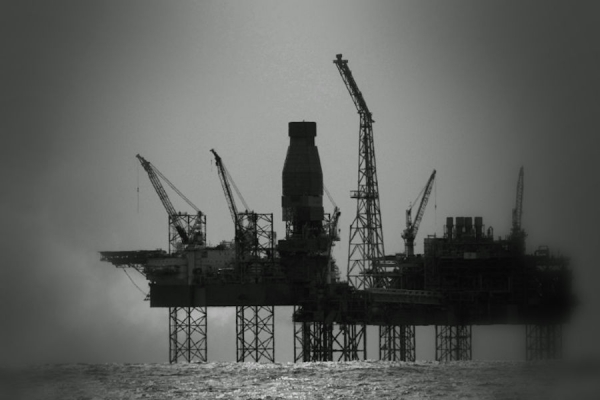 To all the noises normally associated with an offshore oil platform; the deafening roar of the drilling-floor, clamps grinding against steel piping and helicopters whirring overhead, we must now add, according to Shug Hanlan’s recent booklet Xploration, the sound of mellotrons, wild guitar noodling and horn and keyboard driven instrumentals.

On Hanlan’s rigs, Prog Rock, like the North Sea, swells just below the surface. It is a place run on unorthodox lines by a Dutch mime artist turned oil mogul where the workforce is divided between opposing musical factions. A musician, Mike Silverside is introduced only to mysteriously vanish after a gig on the northern coast of Fife. Investigations to locate Silverside give Hanlan the chance to play with hard boiled noir dialogue and uncover the dark underbelly of the Dumfries music scene.

Hanlan has been relatively quiet since his 2001 cult collection “Hi Bonnybrig and Other Greetings” but a change of scenery has brought out the best in his comic talents. Xploration puts a smile on your face as it searches possible, skewed sources of alternative music and sustainable energy.

Bonus material appears in the form of two previously published short stories, “Dr.Quinn” re-imagines the Wild West’s finest female physician as a respected book reviewer and “The High-Jumper’s Fear of his Hard-on” details the difficulties of an athlete suffering from chemically induced erectile dysfunction.

Copies of Xploration and the follow up Ship-reX (reviewed elsewhere) can be obtained from the Kerfuffle Press website priced £3.50.