The Past is a Tattooed Sailor at The Old Red Lion

Simon Blow's fiercely witty and bittersweet new drama, based on the true story of his relationship with his great uncle and brightest of the bright young things, Stephen Tennant.


Past and present are one in the sleeping manor house where Uncle Napier (Bernard O’Sullivan) lives in an eternal doze. Upper class boy Joshua (Jojo Macari) has sought out his great-uncle, long taken to his bed and drifting in memories of his glowing adolescence. Joshua is having his own roaring twenties with new builder boyfriend Damien (Denholm Spurr), but the burden of class weighs heavy over the young man, and ghosts from the past cling to him like Uncle Napier's overwhelming scent.

Uncle Napier draws both boys into his delusions that his own youth has not faded, and that a muscular sailor will give this Sleeping Beauty the reviving kiss. Thus Uncle Napier drifts in reverie. Until the two boys and Uncle Napier are sharply awakened by visits from Joshua’s rich Cousin Patrick. But what sinister thoughts lie behind Patrick’s tight-lipped comments. 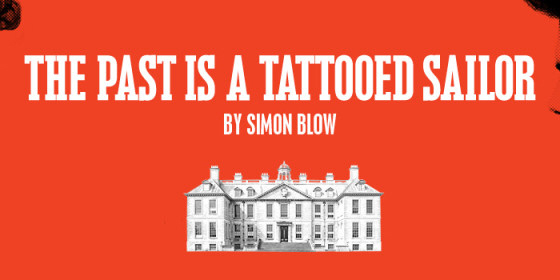 Uncle Napier does not reside alone. The ghosts of his young self (Nick Finegan) and of his mother (Elizabeth George) are haunting the mansion with neither of them showing any sympathy for the old man. His mother refuses to accept him as her “golden boy” at first, Napier’s younger self detests him because he let himself go and turn into an overweight, old man. The narcissistic Napier, however, is convinced that he has kept his youth and beauty, displaying his chubby legs to Joshua – “the legs of a dancer”.

Joshua’s frequent visits to his uncle harm his relationship with his new builder boyfriend Damien because it is obvious that Joshua thinks Damien too coarse to meet his uncle. Joshua has a posh background and a public school education although he missed out on living in a mansion himself as he was cheated out of his inheritance – a wrong that has haunted him all his young life – and which he intends to correct with the help of his uncle. He is dreaming of offering Damien the life he has been missing so badly, once his uncle has passed on after making him the sole heir.

For me, the play was simply but beautifully directed. Uncle Napier could have been somewhat more eccentric considering that he used to rub shoulders with some of the best artistes of his time, but Bernard O’Sullivan played his part beautifully regardless. John Rayment gave excellent support as both cousin Patrick, lending him an ominous quality, and the painter Marcus Templeton, who longs to spend time with his very own bright young things – Joshua and Damien. The handsome and gentle Damien Spurr was the star of the show for me not coming out of character once, he opened the second half of the play with a jaw dropping french accent and dialogue. Bien joué!

The Past Is A Tattooed Sailor is a beautiful and unique excursion into a lost world of sparkling aphorism and gloriously eccentric characters. 5*