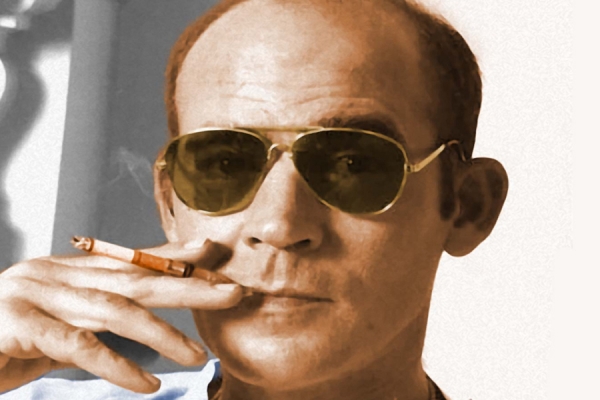 I wrote this piece on my favorite writer in the early nineties for Positive Energy of Madness and soon after started a penpal friendship with him.

Hunter is now gone and God only knows how he would be reacting to the political madness that is infecting the world in 2016. I loved the man. A true individual and pioneer; a dying breed. Dean Cavanagh 2016 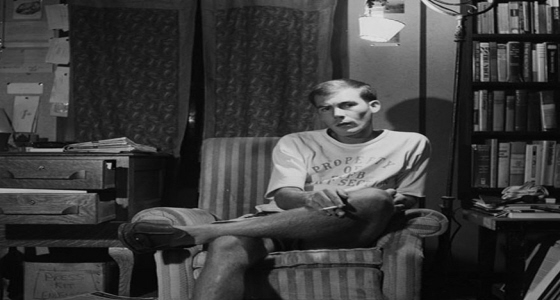 At 6am he slides into his hot tub with a bounty of champagne, Dove bars, fettucine Alfredo and...even more cocaine. At 8am it is time for Halcyon, followed by sleep....Hunter S. Thompson is 56 years old.

Hunter Stockton Thompson was born at the Norton Infirmary in Louisville, Kentucky on 18 July 1937. His mother said that he was ‘difficult’ from the moment of his birth and he has certainly lived up to this description throughout his illustrious life. From his incarceration for robbery at the age of seventeen, right up to his widely documented trial for an alleged assault on an ex fuck-flick-queen in 1990, Hunter has been involved in many ‘difficult’ situations. For instance, there is the time he convinced his sometime cohort, Ralph Steadman, to spray ‘Fuck the Pope’ on the side of an extremely expensive yacht at a race meeting they were supposed to be reporting. There is also the time he begged two war correspondents to take him out into the Vietnamese combat zones; Hunter totally wired believing that the fighter bombers flying overhead were Pterodactyls....when the correspondents got out of their jeep to talk to some soldiers, Hunter decided to go ‘walkabout. The two eventually found him wandering about, talking to his tape recorder (minus tape) a few yards from the enemy lines. 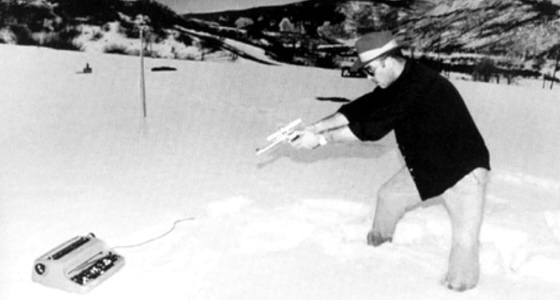 There is the time he was out golfing with his friend Ed Bradley of 60 Minutes fame, and he ended up being arrested for firing ‘Warning Shots’ near a man on a tractor. Hunter’s has simply incorporated career into his work in such a way as to turn it into an art form.

“Does it look like drugs have fucked me up? I’m sitting here on a beautiful beach in Mexico. I’ve written three books and I’ve got a fine 100 acre fortress in Colorado. On that evidence I’d have to advise the use of drugs.”

Having a voracious appetite for chemicals and one hell of a bad attitude has never been a guarantee for genius but it definitely helps. Coleridge, Blake, F. Scott Fitzgerald, Hemingway, William Burroughs...Just add a small dose of egotism, a burning desire for truth and adventure, and a God given literary talent and you have a proven formula.

Hunter S. Thompson is his work, the two are inseparable, from ‘Hell’s Angels; The strange and terrible saga of the outlaw motorcycle gang’, right through to ‘Songs of the Doomed; More notes on the death of the American dream’. Thompson puts himself in the role of the protagonist, following William Faulkner’s belief that the best fiction is far truer than journalism.

Bill Cardoso (fellow writer and close friend of Hunter’s) put a name to this weird train of twisted thought style of reporting; “I don’t know what the fuck you are doing but you’ve changed everything. It’s totally Gonzo.”

“Man is by nature a political animal” Aristotle.

His first book – ‘Fear and Loathing in Las Vegas; a savage journey to the heart of the American dream’ is to date Thompson’s most popular piece of work. Hunter setting off to Vegas with the intention of covering the Mint 400 dirt-bike race with a car full of mind altering drugs and his incorrigible attorney, Oscar Zeta Acosta. The two find themselves a little sidetracked and ended up slap bang in the middle of a Police Officers Narcotics Convention. Suffice to say that our heroes stumble from one hilarious ‘situation’ to another. The book was first published more than twenty years ago but to this day it still remains hilarious, exciting and contemporary.

For his next novel Hunter entered the big bad arena of American politics. This time he was on the trail of the 1972 presidential election, armed only with an unnerving desire to cut through the mountainous bullshit of major league politics, gallons of hard liquor, and of course his drugs. He pulled off what many commentators have described as one of the best pieces of American political journalism. 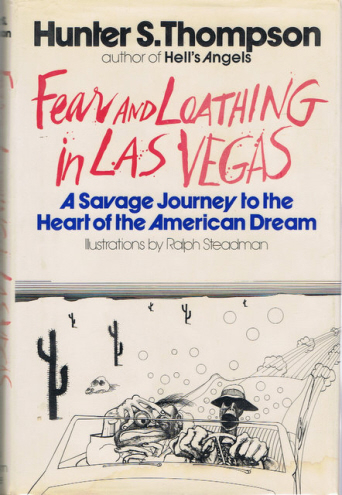 ‘Fear and Loathing: On the campaign trail ‘72’ is a tour de force of perceptive writing, or as the Washington Post described it “Obscene, horrid, repellent...Driving, urgent, candid, searing...a fascinating, compelling book!”

In his 1979 book of collected articles “The Great Shark Hunt”, Hunter S. Thompson goes on the offensive against all the Scurvy Pigfuckers, the Greedhogs and Fun-Pigs and other breeds of atavistic swine who threaten to corrupt the possibility of the American Dream from ever becoming realised. The collection covers everything from Boxing to why Papa Hemingway blew his brains out in Ketchum, and from Hunter’s marginally unsuccessful bid to become Aspen’s Sheriff (on the Freak Power ticket) to how he scared the shit out of Muhammed Ali’s bodyguard in a hotel room in Vegas.

There is a thin, untouchable line of morality that runs through the book; in all these adventures and situations you are left with the feeling that Hunter is really only trying to see if there are ‘human’ beings out there; as to whether there are any ‘real’ people behind the smoke-screens and PR machines. He gives the impression of being the slightly sanest in a room full of professional lunatics. Hunter says of President Richard Milhous Nixon: “He was a foul caricature of himself, a man with no soul, no inner convictions, with the integrity of a hyena and the style of a poisonous toad.” 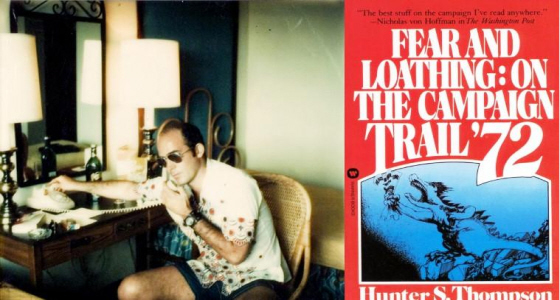 In 1983 Thompson teamed up with his English cohort Ralph Steadman for ‘The Curse of Lono’. Steadman has remained a constant throughout Thompson’s work, popping up at various intervals; illustrating ‘Fear and Loathing in Las Vegas’ with his grotesquely accurate drawings, and in adding personal touches to Thompson’s work when called upon; “I first met him in Louisville, Kentucky in 1970 when I was asked by an unknown magazine called Scanlans to go there and provide some drawings for a piece to be written on the Derby and corruption by an ex-Hell’s Angel who had just shaved his head for the assignment. He was 6ft 6in and had a bullet shaped head. We were like chalk and cheese and hit it off at once. He is blessed with a strange metabolism and on that first meeting I tried to keep up with his colossal intake of booze and stimulants. At the end of the week the raddled, degenerate face of the type of Blue-grass Kentuckian we had come to find looked out at me from a cracked mirror above a washbasin. It was my own.”

‘The Curse of Lono’ is supposedly about the sport of running but with Hunter let off the leash in Hawaii anything can happen; “Thompson, with characteristic paranoia, finds Paradise rife with racial tensions and violence that reduces the melting pot to a myth.” wrote Archie Scott in the Louisville Courier-Journal & Times. 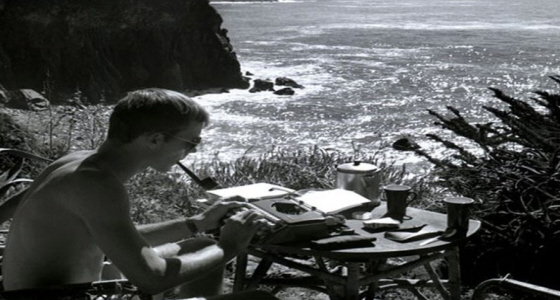 “American Politics is a form of Socialism for the Rich” Gregory Nunn.

Articles entitled ‘Kill them before They eat’, ‘Bad nerves in Fat City’, ‘The Scum of the Earth’, ‘Crazy Patrick and Big Al’ and ‘They called him Deep Throat’ you could only be scanning the pages of a Dr. Hunter S. Thompson collection...The reader is treated to passages from the Bible: a tale concerning his girlfriend having a tattoo done, the reason why he didn’t make it to a book fair in Scotland to address a group of Pissed Bikers, how he blew up a Jeep, swipes at TV evangelists, and of course a large helping of genuinely funny political pieces. Not everybody finds the collection interesting. Richard Vigilante of the National Review thought that the book was “Obsessively political. Thompson has always had strong prejudices but these days that’s all he has.” – but as Rhonda Koenig put it in New York: “One does not, though, read Thompson for his prophetic skills but for his sober, unflinching anarchy...”

Middle age has done nothing to dampen the fires that rage within the great man, he has not slipped into his fifties like most of his peers, his brilliant mind is still razor sharp and contemptuous; flirting with controversy, laughing in the wrinkled face of conformity at every available opportunity, blowing grass smoke in the squinting eyes of convention and operating on a level with its own rules. 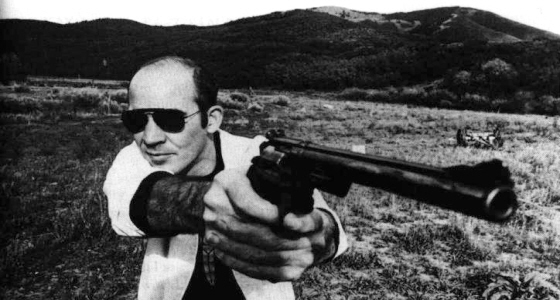 “The age of great men is going; the epoch of the ant-hill, of life in multiplicity is beginning.” Frederic Henri Amiel 1828 – 1881.

“Shit, the Secret Service was up here about my alleged threats to kill Bush, stomp him to death. I mean, I have a bestselling book on the market in which he’s called a shit-eating roach, criminal whore, a whole lot of things. It’s not like I’m laying low. I’m not so much worried about Bush, because I don’t think he has the balls to do that. But I do worry about his staff people. I think they have demonstrated a capacity for hardball that I admire and that I have to watch for. Yeah, they were going to indict me on two felony counts. They fucking had the indictments pending! One for threatening the life of the Vice President and one for inciting others to do so.” Hunter told Richard Guillatt in an excellent 1988 ‘Time Out’ interview, adding another layer to the burgeoning legend. Other reporters have found a far more subdued legend, Susan Warren of ‘You’ magazine wrote; Twenty five years ago, after living with Hell’s Angels for a year and writing a bestselling book about it, Hunter retreated to the mountain and there, apart from occasional forays out into the world to make money and raise hell, he lives as a recluse.”

Puzzled visitors who have come to pay homage find that he has locked himself in with no intention of receiving guests. Owl Farm is encircled by a high wire fence and padlocked gates as protection against sightseers”. 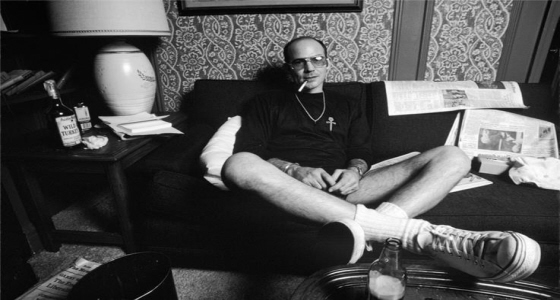 Hunter has written his novel ‘Polo is my life’, for Random House, who have paid $1,200,000 for the rights...and ‘The Night Manager’, a book about the O’Farrell Theatre in San Francisco, dubbed ‘The Carnegie Hall of Sex’ – where he spent time working on the cash desk and generally hung around ‘researching’ the fuck-flick industry, has yet to materialise...There are still those philistines out there who question Hunter’s ability to still cut it in the apathetic nineteen nineties, but a recent piece he wrote on our beloved and debauched Royal Family, for the Observer Magazine proves otherwise; “There is nothing like a flash of Royal nipples on the front page to divert the public mind from a crashing economy...Never mind paying the rent, Bubba – just look at these jiggling tits.”, Hunter wasn’t too impressed with our Blue Blooded rulers; “The Royal Family is like a nest of teenage rats. I don’t want to have to think about them again!”

I like to picture him perched on a bar stool in a halfway Ale House, somewhere between the chaos of first world capitalism and the small town eccentricity of middle America; sat ordering large Molotov Cocktails to lob at all the spine donors, money hungry developers and big league crap peddlers who happen to sully the view of his beloved country. I refer to Frederic Amiel and mourn the demise of the truly great men...the innovators, risk takers and creators, Hunter stands among them with a luminous ‘Fuck You’ tattooed on his shiny bronzed bald head spitting articulate barbs at the enemy...The first Hippy with bad ass attitude? The first Punk with a ballpoint? Or simply one of that dying breed known as individuals?