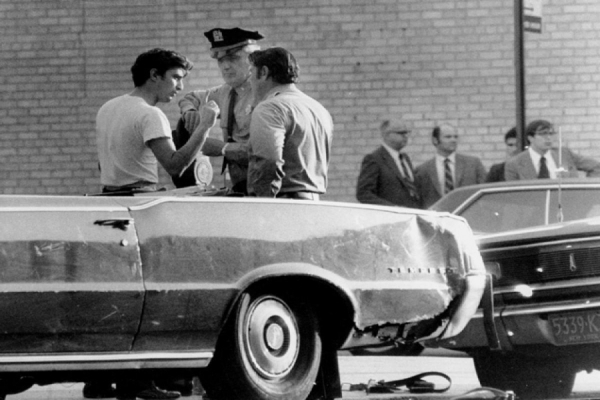 Coming clean, he told the world why he was robbing the bank that day. Citing that through his wife’s suicide attempt over not having a woman body he had resorted to robbing a bank to provide for it.

Proper love story. As requested, Aron was brought to the bank to see Wojtowicz. Looking every inch a person who had been dragged unannounced out of their safe haven of a mental hospital having only days previously attempted suicide. Wojtiwicz’s wife refused to go over to the bank to speak to him in front of the live TV news cameras. His mother, Terry, did visit him during the siege. Standing there outside for 13 hours willing her son to surrender. As the hours went by this began to take it’s toll on the hostages. They were tired and frightened of the situation they were forced into. Ironically though they didn’t appear to have been frightened of Wojtowicz himself. Head teller at the bank, Shirley Ball said in a documentary years later - ‘I realised that he was friendly, he wanted to be friendly and he had a purpose for robbing the bank, he didn’t think it would take that long, he thought that he would be in and out - but the way things happened he didn’t get out.’

In what was back of a packet of cigarette style planning. Accepting that he was for all intents and purposes, royally fucked. Wojtowicz entered into negotiations with the authorities over releasing the hostages in return for a private jet to fly him and Naturale to a country of their choosing. Soon, both robbers and all but one hostage were boarding a bus headed for John Fitzergald Kennedy airport driven by an undercover FBI agent. Before this, the watching crowd were treated to the theatre of a strutting Wojtowicz, rifle over his shoulder. finalising negotiations with U.S attorney Robert. A. Morse. Happy with the terms, the smiling robber ordering all police officers to drop their weapons before the hostages would leave the building for the waiting vehicle. The gun’s were duly placed on the ground and the hostages began filing out of the bank. Within the hour Naturale was shot dead inside the people carrier by the undercover agent on the tarmac at JFK while they waited on the jet being prepared. Wojtowicz, arrested and all hostages rescued. Once arrested. The inquest began into whether Wojtowicz had really robbed the branch of Chase Manhattan that day purely for the reason he had told the world. Questions were raised over whether there was more to this than met they eye with the suggestion being that this was a mafia job that had went disastrously tits up. The NYPD didn't buy the romantic story spun by Wojtowicz of a gallant heroic man willing to do anything for his wife either. 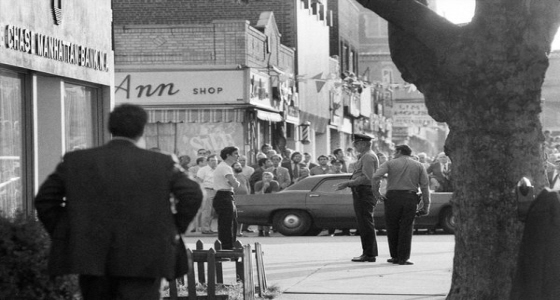 "They wouldn't believe the true story, that I was robbing a bank to get my lover a sex-change operation, so I had to invent a story," Wojtowicz admitted in an interview years afterwards. "So I signed a confession that said I met the vice president of Chase Manhattan bank and he told me how to do it."

Had the heist really been carried out for love, or was merely a side story invented by Wojtowicz to romanticise a botched job? According to Arthur Bell, reporter at the time for The Village Voice and already someone who knew Wojtowicz through the Gay Activists Alliance. The cover story was not as black and white as was being portrayed. Having direct contact to the bank and Wojtowicz during the siege. He was told straight from the horses mouth that weeks earlier he had met with a Chase Manhattan executive at a gay bar in Greenwich Village who told him that there would be an opportunity to rob a branch of up to $200,000. The delivery by armored truck was scheduled for 3.30 that afternoon. The intel was wrong however leaving Wojtowicz and Naturale with no more than $29,000 sitting in the banks vaults. The robbery appeared to have been something that had been planned over time rather than carried out on a whim to pay for Aron’s operation.

Bell, also being told by at least two prison inmates and friends of Wojtowicz’s that the real story of the robbery was that the stick up men that attempted to rob the Chase Manhattan branch that day were part of the Gambino family. The individual versions of the story told to Bell was identical each time. The take was to be a 50% respect payment to the Gambino family and the other half divided up between the 3 robbers. The story of the sex change was a convenient decoy to take the attention away from the mafia while adding to the mystique and infamy of John Wojtowicz. Infamy that snowballed from the moment that he was taken into custody and leading to a 20 year prison sentence. Serving only 6 years, his stretch covered the time where the actual film of his exploits was released. Hitting theaters during September 1975 and three years into his sentence at Lewisburg Prison, Pennsylvania. 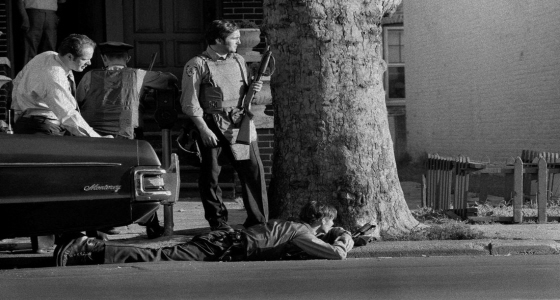 The request from Wojtowicz to have the film screened inside the prison initially being denied by the warden. Talking years later about it, Wojtowicz described how angry he was over this. His incarceration had not been kind to him. With the infamous celebrity style status that he came with, it left him open for a torrent of abuse while locked up. He suffered a brutal gang rape as well as regular beatings, one particular nasty one that left him in hospital and something that he still suffered from nightmares decades later. He’d had to endure so much physical and mental torture during his sentence. This was, he felt. His moment to deliver the ultimate fuck you to everyone by showing them that Hollywood had made movie about himself with Al Pacino of all actors, playing the lead role of the main man.

“The warden said, ‘We’re not showing this.’ And I said, ‘If you don’t show this in the prison, I’ll go to the press and and I’ll hang you by your fucking cannolis. And I’ll start the biggest prison riot you ever saw. I want the fucking movie shown and I want it shown to the inmates because I promised them for years, because nobody believed there was going to be a movie.”

Before the rights to the movie had even been agreed on there were various arguments between Wojtowicz and the film production company. This led to the headstrong inmate denying the right to use his real name in the film which then saw Pacino going by the name of Sonny Wortzik in the movie. This in itself going against every bone in the narccistic body of Wojtowicz. According to reports, he was paid $100,000 for the rights to his story. Apart from actually paying for his lovers sex reassignment surgery, most of the hundred grand he never saw. Right up until his death. The matter of the money was contested in court with the majority being diverted to the hostages by the New York State Crime Compensations Board. 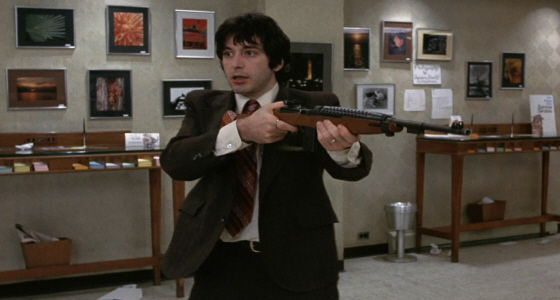 He found love, again, in prison. Marrying George Heath, a convicted bank robber and jailhouse lawyer, making him Wojtowicz’s third wife. ‘John was to me a bad, crazy individual, but the thing I liked about him was that he got heart. He loved to be married, he had to have a wife, so I became his third wife.’ Heath said. Surreally, when Carmen would visit Wojtowicz in prison, the two wives would wave to each other. For a man of such perversions and someone who thought nothing of having multiple “wives” Wojtowicz had strong feelings on love. During his trial and before sentencing when asked by the judge if he had really committed the crime through love for his wife. He replied ‘Love is a very strange thing. Some people feel it more deeply than others” before then going on to insult the judge by accusing him of not loving his own wife enough.

When he was released 6 years later after appeal. He returned to the outside world penniless and like most ex prisoners found it practically impossible to find employment. In true fashion of the man he applied for a security position with the same Chase Manhattan branch that he had robbed years before, strangely he didn’t get the job. ‘I went to Chase Manhattan when I first was out of the halfway house. I wanted to be a security guard for them,’ Wojtowicz said. “My reference was Dog Day Afternoon. I say’s ‘I’m the guy from Dog Day Afternoon, and if I’m guarding your bank, nobody’s going to rob the Dog’s bank.’”

Living with his mum for most of his post prison life. He would on occasion go down to the scene of the robbery to pose for pictures and sell autographs. Still proud of and unrepentant of his crimes and driven by the need to have the reputation gained from them held intact. The last years of his life while suffering from cancer were spent helping New York film-makers Allison Berg and Frank Keraudren gain enough material to make up the excellent film documentary “The Dog” on the life of Wojtowicz. 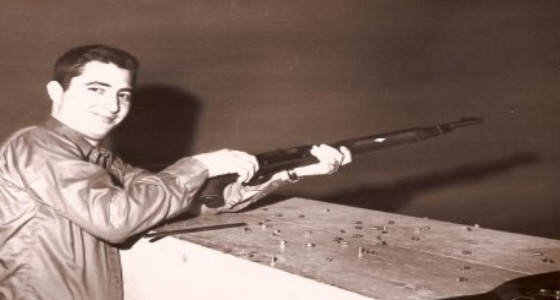 “We were just curious about what the real life guy would be like - would he be as outrageous, as charismatic as the person you see in Dog Day Afternoon?” says Berg. In fact he was “a hundred times more unusual and interesting and hilarious.” By this stage, Wojtowicz had given himself the name of “The Dog” off the back of the name of the movie. “By the time we met him he had been living in oblivion with his mother and he was just very happy that somebody would show up again and be interested,” says Keraudren. The two film-makers would then go on to visit Wojtowicz and mother Terry practically every weekend from that moment on. In the end becoming almost part of the family until The Dog’s death in January, 2nd 2006 aged 60.

John Wojtowicz was an unapologetic pervert. A romantic, a narcissist, a complete lunatic and a lover with biggimistic tendencies. The world knew him however as the charismatic armed robber who committed a crime and left a captivated audience with conflicted feelings over when exactly it is and isn’t cool to rob a bank. He died with no regrets on what happened on that 1972 August afternoon.