Accent ‘84’ —The Casual Approach to Being in a Band 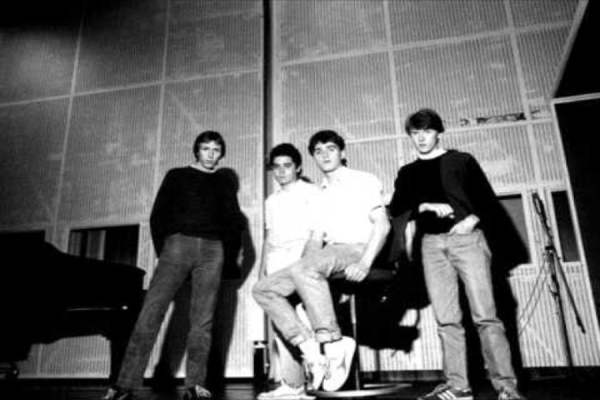 Accent were a Jam style band practicing away in West London, loving punk, enjoying the post punk bands around at the time and getting into soul, through Jam single’s B-sides and bits of Electro and Disco. Saturday was spent at the game, not much glamour at the football back then, but tons of passion and a smattering of fashion — Pringle jumpers, Tachinni, Fila tracksuits, Lacoste and deerstalker hats, Desert boots, Kickers are all around.

The singer, Brian Rydell and myself (it was our band) saw an angle, we were getting into the clobber and saw a parallel with mod, it was all about being smart and dressing better than the next person, with a constant hunt for new labels.

We knew Garry Bushell (then at Sounds) had championed the 2nd wave of Mod bands — Chords, Purple Hearts and we were pretty sure we could get him interested. We produced a fanzine about ourselves and casuals called ‘In The Crowd’ and we started giving them out, Bushell was hooked immediately, he reviewed a gig then put us on the cover, much to the disgust of the average music paper reader of the time.

On a roll, we needed a Svengali McLaren type figure with a clothes shop, West London’s only one choice was Stuarts on the Uxbridge Road. So we talked the owner into becoming our manager, although this just meant he gave us free clothes, that was all that was required really.

We were gigging round West London, Fulham Greyhound, upstairs at the Kings Head and we created the Casual Beat club where the crowd was more punky rabble than casual, but a few were passing by, most casuals were soul boys at the time. 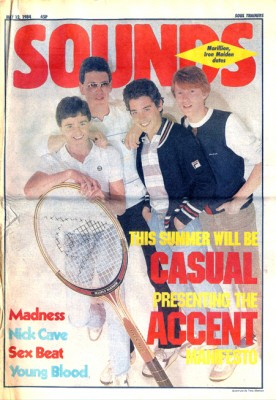 Chelsea had just been promoted from the old 2nd division in ’84 and they were having a party at the ground before the last home game to celebrate, so we chanced it — ‘there’s no harm in popping in to see Ken Bates’ (Chairman at the time). We walked into the offices which were at the entrance back then, no security!, opened the door and there’s Ken’s secretary and Ken, handed him a fanzine and said ‘can we play’, he said ‘yes, sort it with my secretary’, all within 5 minutes. Can you believe that? as if you could ever find a soul inside the offices like that now.

The following Saturday we’re setting our equipment up on the pitch infront of the then main (east ) stand, ground starts to fill up, probably about 15 –20,000 in at this point (about 2pm). We run through 5 songs to a good response , polite round of applause and no abuse! Pat Nevin the only indie footballer of the day wrote about us, some major labels invited us in for demos, our hype was better than the sound of the band, we released an indie single and faded away, that was that.

At least we can always say we started at stadiums and worked our way down.

Special Thanks to Mick Habeshaw Robinson and Danny Mitchell