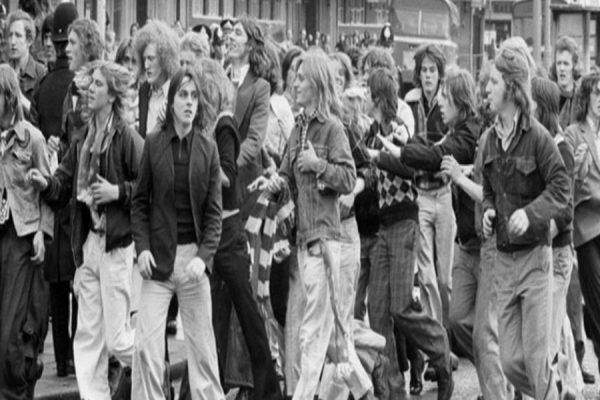 I’ve had enough, I’m for the lads at the City End who don’t give a damn. Who work for the week to get to Saturday. ....

You can get back to your telly, Les. Watch your football from there, there’s no chance of you meeting anybody, not a chance of you touching anybody...You’re for the house. I’m for the City End.”

These are the words of Harry Philton, lead character of Zigger Zagger – firmly in the grip of football fever . But this is the mid-point of the play and young Harry’s world is about to come crashing down. Joining a gang gives you an identity, but then it starts to strip away at your ego, and Harry is about to learn this the hard way. The second half of the play is a crushing condemnation of a life in a gang, and it is very probable that Zigger Zagger served as a blueprint to the concept album and film Quadrophenia.

Nowadays it seems that barely a week goes by without a book or a film or a play about football hooliganism hitting the streets, but written and first performed in 1967, Peter Terson’s Zigger Zagger was the first major dramatic work to tackle this hot topic of the day – when the football hooligan had supplanted the teddy boy as the tabloid’s favourite folk devil.

But it was in the seventies when Zigger Zagger really stuck its boot into public consciousness. With its set-up of a football stand on stage facing the audience, Zigger Zagger was an ideal play for schools. If you failed the audition for the one of the main parts you could be one of the chanting on-stage football crowd – and the crowd could be as big as the number of kids who wanted to be in the play.

The on stage crowd faced the audience and sang in between scenes, not unlike a Greek chorus, they also intermittingly reacted to what the actors were saying. Just as in a real football crowd, the play has Zigger Zagger himself – leader of the football fans, who leads the chants and starts off the songs, he is a mephistolean figure in Harry’s life hanging on his shoulder leading him astray while Harry’s brother-in-law Les represents the path of grey unappealing conformity – ‘learn a trade Harry. Security is what a girl is after.’

Peter Terson wrote the play for the National Youth Theatre, and it grew out of the school of improvisation and workshopping, where actors were allowed to bring something of themselves to the role. The original play was modified right up until the first curtain rise and in turn the performing schools would alter the slang and the football references to whatever suited their particular region.

So 45 years on, has Zigger Zagger dated? Well of course it has - because the play was of its time and times change . What it represents now is a window into working class life at that time. Zigger Zagger is coming at you from a time when the stripes of a top boy of the terraces was not designer clobber - but a scarf, flares and bovver boots. The smart casual football fashion that emerged from the late 70s onwards could be interpreted as a reaction against this image of the dumb unsophisticated yob.

A criticism that has been levelled at the play was that it mocked the working class. This is indeed true, but then again Peter Terson was himself working class, having grown up in the 30s among the idle shipyards of Newcastle. In the same way that Johnny Speight mocked the working class Tory ideology of Alf Garnett – it was something that needed to be said. When you grew up in environment of cultural restriction and oppression it is only right that your first artistic expressions should be about it and against it.

Post war - the working class of Britain were finding an artistic voice, the late fifties gave us playwrights like John Osborne, Arnold Wesker, and Harold Pinter – and Peter Terson along with Trevor Griffiths (Comedians) and Shelagh Delaney (Taste of Honey) represented the next wave of working class playwrights , and so Zigger Zagger is a shining example of the excellent popular drama that was produced in Britain in the sixties and seventies – a creative golden age when theatre thrived and TV plays were prolifically commissioned and aired.