Johnny Jarvis – A Forgotten Gem from the BBC 1983 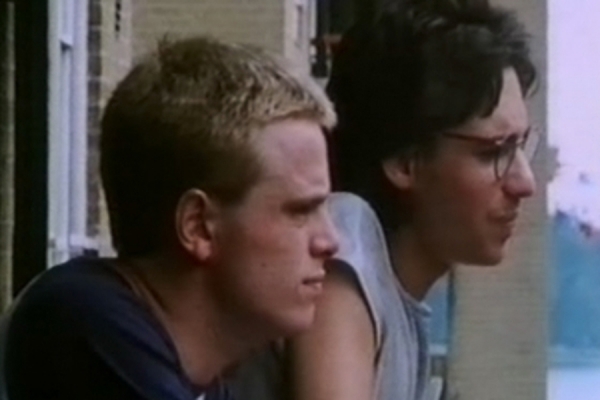 Between 10th November to 12th December 1983, BBC 1 ran a six-part series, Johnny Jarvis.  A story of two friends spanning over a six-year period, starting in 1977 and ending in the then present, 1983.  The series was set in Hackney and its surrounding boroughs, all shot on location with no studio scenes. Written by author, screenwriter, and playwright Nigel Williams (20th January 1948) an Oxford graduate and talented writer who creates engaging and intriguing plots, with an emphasis on character study and development. Despite stemming from public school education, much of Williams’ early work displays empathy for the working class, in particular teenagers. 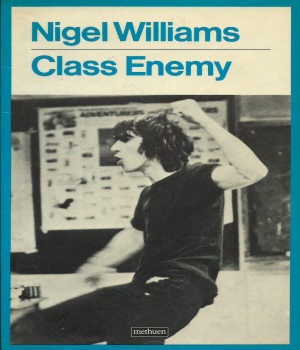 One play in particular, Class Enemy, performed at the Royal Court, April 1978, just after Williams had turned thirty, was about six teenagers who are perceived as unteachable and yobbos.   They wait in a rundown classroom in South East London for a new teacher, during which time they reflect upon their lives.  The play starred a very young Phil Daniels who, a year later, would inspire a generation to become Mods in The Who cult classic Quadrophenia, and from then on, forged a very successful acting career. Whilst Williams would charm the nation in 1994 with his adaptation of The Wimbledon Poisoner starring Citizen Smith himself, Robert Lindsay, and in 2005 with Helen Mirren (Prime Suspect, The Long Good Friday) as Elizabeth I.

Class Enemy is a powerful play, with bittersweet monologues and the angst that troublesome and not so troublesome teenagers face. Williams clearly researched the subjects and situations well as the dialogue and drama comes across as authentic. Clearly, the life of teenagers was a topic Williams wanted to dramatise further adding more characters, settings, and situations, which he did with Johnny Jarvis five years later.

In 1977 Johnny Jarvis was the joker at the school full of confidence, blonde hair, and a cheeky smile, with a twinkle in his eye, he is carefree and youthful played by Mark Farmer (Grange Hill, Minder). Farmer, due to his association with Grange Hill, as Gary Hargreaves, was a familiar face to the youth of Eighties Britain.)  Jarvis is a pest to the teachers, and wildly accepted by his peers, yet it soon transpires that he doesn’t have any real friends, and his parents show concern for him being a loner. His father is played by John Bardon, who many years later became an EastEnders regular, Jim Branning.

Jarvis’s wayward, yet endearing attitude and style, is noticed by a bespectacled, scruffy, nervous, and worried youth, Lipton. Ian Sears (King David, The Cook the Thief His Wife & Her Lover). Sears was an experienced actor in 1983 but relatively unknown, who would carry on in acting, but forged more of a career in film editing, whereas Farmer would move away from acting and more into music. It would be fair to say, that Lipton was Sear’s only ever lead part.  Why his career as an actor never bloomed after this series is a mystery as he was talented.  Maybe it was his choice.

Following his mother’s advice, Jarvis decided to make an effort and make some friends and overnight becomes a skinhead, only to be turned down by the main hard-core skinheads and their leader Manning,  played by a very thin and fresh-faced Jamie Foreman (EastEnders, Gangster No. 1). So under forced circumstances, Jarvis becomes friends with Lipton, as no one else wants them. Moreover, at the start, Lipton is like a lapdog to Jarvis.  So it is a simple story of the unpopular kid wanting to be friends with the popular kid.  Yet, unknown to the unpopular kid, the popular kid is full of insecurities.

However, as their friendship develops over a six-year period, starting in their mid-teens to their early twenties, Lipton becomes the stronger one, as he develops skill as a lyricist for a London based punk and funk-influenced band, The New Wastrels.   Whilst Jarvis, after finishing an engineering apprenticeship, moves from job to job as he is often faced with redundancy. This is not reflective on Jarvis’s skills, but rather a statement from Williams about British industry, in particular the demise of engineering and the increase of youth unemployment.  Furthermore, their relationship is tested, and at times causes wounds, which do not heal, as both men fall in love with Stella (Johanna Hargreaves, High Road, No Bananas), an upbeat and caring beautiful girl, with spiky purple hair. Free-spirited, which leads her to have an affair with both Jarvis and Lipton, eventually mothering Jarvis’s child.  Throughout the series, Stella seems to be more in love with Lipton, yet Lipton is incapable of returning her affection, which maybe due to the fact he has no real bond with his mother and his father left home at an early age. 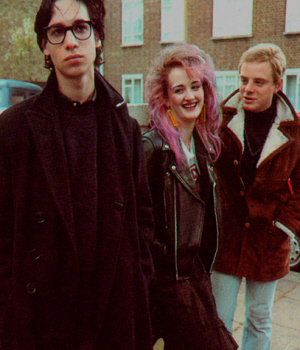 The love triangle between Jarvis, Lipton, and Stella, is one of the many subplots that Williams creates for Johnny Jarvis, which pushes it further than the usual antics of youth, such as music and clothes.  Williams wants to present the emotions we also face, not just the style, as well as using the series as a study of England, which explores trends, racism, unemployment, and hardships in the late 70s and early 80s.  Furthermore, Williams creates a strong supporting cast of characters, whom in turn have their own stories intertwined into Johnny Jarvis, such as a young black lad  Paul Turner, simply called Turner (Alrick Riley, who moved into directing after Jarvis, Death in Paradise, Hustle, Stanton Blues). Turner becomes the focus of skinhead leader, Manning, yet he fights back.  Also, Turner finds employment with his Rasta Uncle Kenny (Jim Findley, Lazarus & Dingwall, Britannia Hospital, Playing Away) a well-meaning man, yet a loveable rogue who pushes Turner.

Turner doesn’t just face racism from the local yobs, but also the police, in which he is framed for assaulting a police officer, sent to a youth detention centre, where he meets his old adversary  Manning.  Police racism and corruption were rife in the early 80s, which Williams was brave to address as to were the BBC to air Johnny Jarvis, as it seemed to be common knowledge but not yet concluded (not sure if it has today). Turner's character acts as a window into the black community, in particular, the Rastafarian and sound systems culture which he has a strong affiliation.

As stated, Lipton forges a successful career in music.   He moves out of a squat he shares with Stella and into a hostel for boys, run by the gay and kind-hearted Rev. David Sales (Neil Cunningham;  My Beautiful Laundrette, The Deep Concern, The Draughtsman's Contract. Cunningham, unfortunately, passed away in 1987, aged 44. )

Here Lipton meets Guy (Gary Shail: Quadrophenia, The Further Adventures of Oliver Twist, Metal Mickey), who in turn form a band.  (Shail is also a musician and currently runs a recording studio).  All the music performed by The New Wastrels is original material, lyrics by Nigel Williams, and music by Shail, who is recording some of these great catchy numbers for an up and coming solo album. The New Wastrels is formed after a few lineup changes and musical direction, starting off as a loud punk band, then evolving into a more funk-influenced band, which was the music taste developing amongst the young in England.  Lipton drops out from performing and recording, but stays on as the chief songwriter.  In addition, Rev. David Sales becomes their manager, and the repro between Guy and Lipton is very Lennon and McCartney, and Sales is somewhat of an Epstein figure, I am sure that was Williams’ intention.

The New Wastrels became a success, and the royalty cheques make Lipton a wealthy young man, able to buy his own flat outright, yet this doesn’t make him happy and fulfilled.  Another avenue explored by Williams, the great working-class escapade, music, and the destructive side of rock & roll, Lipton turns to the bottle for salvation. Furthermore, much of Lipton’s songs are about Jarvis and his tragic life, which Guy often mocks.

There is also a strong thriller aspect running in Johnny Jarvis, which comes about due to the fact that at an early age Lipton’s father left home, which troubles him, yet he manages to track him down as he finds out his mother has been withholding letters from his father, which goes without saying annoys Lipton.  Catherine Harding (On the Razzle, Moonlighting) gives a heartrending performance as Mrs Lipton, a downtrodden woman with only cigarettes and the bottle as her only real companion.

Lipton tracks his father down or, who he thinks is his father. Hoping to reconcile a father/son relationship he couldn’t be further from the truth, as his supposed father Jake (Maurice Colbourne: Howards' Way, Gangsters, The Onedin Line) is involved with a very dodgy policeman (who was responsible for setting up Turner and instrumental in the sentencing of Manning) simply called The Colonel (Nick Stringer: The Bill, Press Gang, Goodnight, and God Bless).  Adding suspense to Johnny Jarvis does work well, as it adds texture to an already complex yet intriguing plot, in fact, it is reminiscent of  Herge’s Tintin comic, as Lipton hides and spies on Jake and the Colonel doing a dodgy deal in a run-down warehouse. 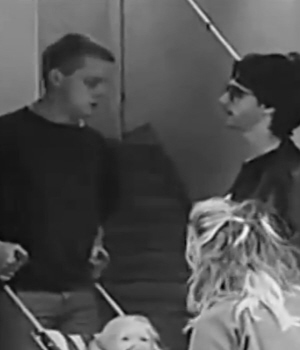 Johnny Jarvis is an entertaining and enthralling series, a strong cast, which brings the characters to life with engaging and intelligent performances. The chemistry between Jarvis and Lipton is magical, they create believable and credible characters, that are not one dimensional.  At times they are quite comical with naïve charm, and in the next scene tragic characters, and as we all know life can be like that. The series moves at a rapid pace with energetic dialogue that sometimes crosses into monologues, which does not slow it down but helps to give us a better understanding of the individuals and their situations.  Similar to another classic BBC series, Play for Today, usually gritty but touching dramas.