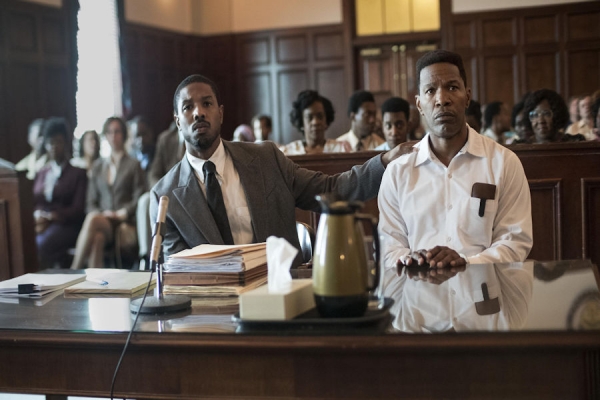 Based on a true story, Walter McMillian (Jamie Foxx), an Alabaman logger was sent to prison for a murder he did not commit in 1987.

Despite an absence of evidence and based upon the coerced testimony of another felon, McMillian is sent to death row. Young African American Harvard lawyer, Bryan Stevenson (Michael B. Jordan) comes to Monroeville, Alabama to defend death-row inmates and exonerate the wrongly accused. The young defender comes up against, bigotry, prejudice and police harassment as he tries to overcome the impossible for his clients. Brie Larson plays Stevenson’s co-worker Eva Ansley, and Tim Blake Nelson performance as the remorseful inmate whose false testimony led to McMillian’s incarceration is arresting. Rafe Spall plays the windbag District Attorney, Tommy Champan; and look out for Darrell Britt-Gibson, as the reluctant witness, Darnell Houston. A powerful and at times brutal film, long in the telling, but will keep your interest until the final credits.