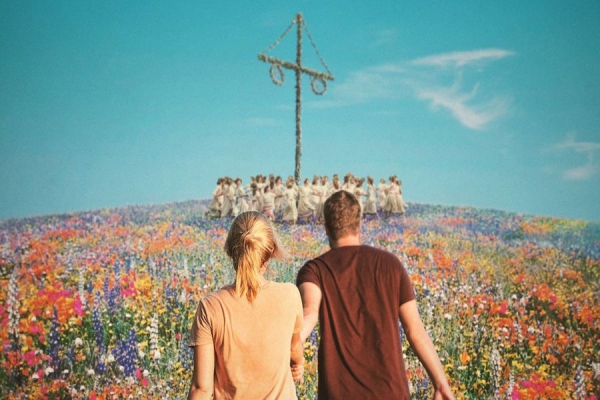 Between Ari Aster's previous film Hereditary and horror classic The Wicker Man, of which I'd go so far as to call this a loose remake, this film doesn't hold many surprises or bring much more to the party.

There are plenty of good features though - the cast is all decent, the script doesn't creak too much and Aster has Tim Burton's eye for buildings. He also knows what he's doing and has his own voice, no question. But as in Hereditary, only half of the clever camera tricks seem to have much purpose, and Aster's distinctive pacing, uneasiness and use of sinister drawings already feel easy to parody. After two films, rather than settling any deeper into this groove, I think he needs to shake things up.

This is, broadly speaking, a horror film in which a group of American college kids, two of them anthropologists searching for dissertation material, visit a remote Swedish commune in the idyllic countryside, and let's just say it all becomes highly regrettable. There are hardly any "scares" as such in Midsommar, but the experience is unsettling and foreboding all the way through, and as in Hereditary you occasionally see some spectacularly gross-out and bizarre sights with corpses that are not for the physically squeamish. 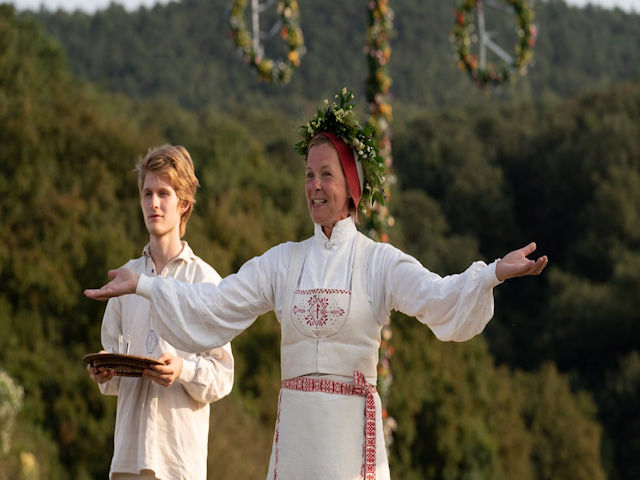 This is one of those films which will be disliked by that friend we all have who doesn't like films if they can't like any of the characters: no-one in the remote Swedish commune is particularly well-drawn, while none of the visiting American students is easy to warm to: they are awkwardly pitched half-way to being disposable slasher-flick teens. Since awkward is the film's watchword in many ways, I'll credit that with being a deliberate artistic choice.

Florence Pugh gives an excellent performance as Dani, a lot of it in punishing close-up, achieving the difficult task of enlisting our understanding for a character who can be notably tiresome. For my own part, I must admit I probably felt more sympathy for Dani's crap boyfriend Christian (Jack Reynor) than most viewers would: while he crosses some serious lines towards the end of the film, it's hard to say what he should have done differently at the start. If horror films are a warning, I guess the moral of the story is: ditch someone you're unsure about even if she's just had a massive family tragedy. Be that douchebag. Otherwise, spinning the relationship out beyond its lifespan will lead to some seriously ill-advised holidaying together and one of you might end up getting, ugh, I mean, the bodies are, well, ick, and then they put them in the, um, ugh. Just no. Don't go to Sweden.