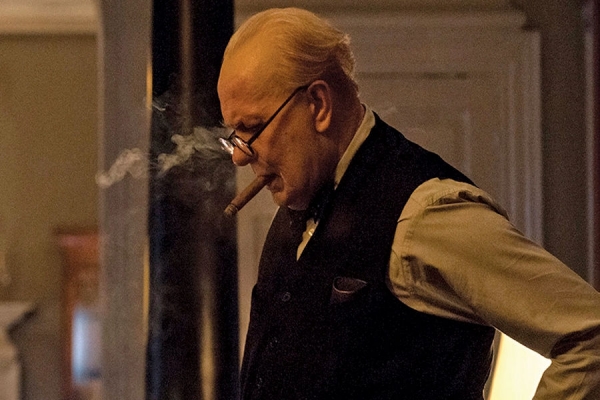 Darkest Hour is a triumphantly superb, inspiring historical World War II drama directed by Joe Wright and written by Anthony McCarten. The core of which is about an unabashed man, Winston Churchill (played with relentless, flawless magnificence by Gary Oldman) thrown in the middle of the some of the most unimaginable inhumane crazy set of circumstances at the beginning of his career as Prime Minister of the United Kingdom.

Gary Oldman once again delivers an incredible acting master class, giving an awe-inspiring accurate performance as Winston Churchill, from the moment we first see him on screen lighting a famous Churchill cigar while in his bed, having his breakfast to addressing Parliament. Oldman’s Churchill shows the real humanity of the man with his flaws and frailties as well as his rudeness and being able to annoy people without intending to, which he was sometimes in the right for doing so, but more often than not was wrong. “Will you stop interrupting me while I’m interrupting you” Churchill shouts at Lord Halifax (played by the brilliant Stephen Dillane) in the war room and then goes on to say “You can not reason with a tiger when your head is in its his mouth!”

We see a side to Churchill, which dramatic audiences have not seen before and that is of self-doubt, as well as reflection and fears, with people around him trying to sway him off the course of action becomes susceptible, but his humanity makes Oldman’s performance, even more, stronger and Legendary. 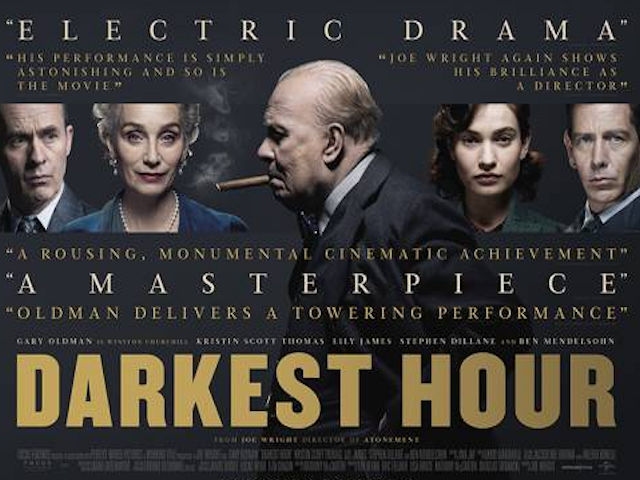 The Supporting cast includes the wonderful and elegant Kristin Scott Thomas playing Churchill’s wife, Clementine, who is both very supportive of her husband as well as not being afraid to call him a brute and to put him in his place. Clementine explains to a frightened and scared Elizabeth Layton, Churchill’s new secretary on her first day (played beautifully by Lily James) “…He has a knack for drawing out the very worst in those who are helping him the most.” Much of the film is seen from Elizabeth Layton’s point of view of Churchill, which allows us to see the frailty and flaws of the man.

Another stand out and note wordy performance is by Ben Mendelsohn, who gives a fantastic perfect portrayal of King George VI, showing great chemistry and dynamism and also somewhat comic timing between himself and Oldman’s Churchill, again not afraid to speak frankly to Churchill when needed to, as well as bringing the weight of the circumstances of the situation at the same time.

Darkest Hour is a marvelous and fantastic historically film with great performances and superb direction, but also brilliant cinematography by Bruno Delbonnel and music by Dario Marianelli. Darkest Hour is not to be missed opens in UK Cinemas nationwide on Friday 12th January. I would be very surprised and disappointed if Gary Oldman does pick up multiple awards for the greatest performance of Winston Churchill ever seen on the big screen.