War of the Planet of the Apes: Reviewed 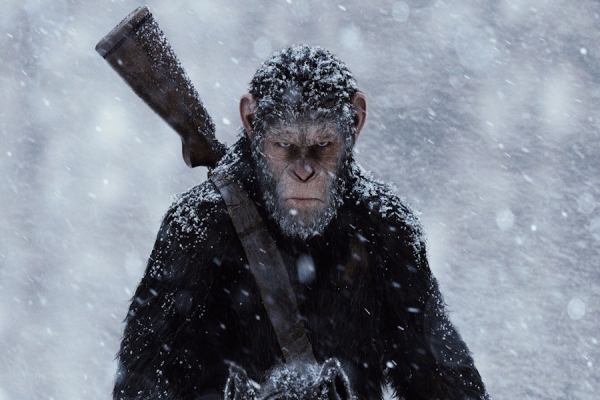 The Ninth Planet of the Apes film in the past 49 years is a beautifully epic, thought provoking sci-fi war film with sparse spoken dialogue, which ‘La Planete Des Singes’ author, the late Pierre Boulle would have been proud to have inspired.

Human Soldiers and *Donkeys (apes which are now serving the humans against fellow apes in the war) are trying to find the location of Caesar from the orders of ‘The Colonel’ (played by a brilliantly menacing and ruthlessly psychotic Woody Harrelson). After a deadly and devastating confrontation, Caesar takes on a personal mission for vengeance against The Colonel, with the aid of a few fellow apes. The journey takes the apes through both sandy beaches as well as the snow, only to discover The Colonel’s plan for using the apes as slave labour to build a massive wall to keep out invaders. The Colonel is also afraid of a deadly infection that could end the human race.

War of the Planet of the Apes is an absolute triumph in both the use of sign language, which the apes are able to communicate with each other as well as stunning motion capture digital effects giving the apes a feeling of humanity more than the savage, psychotic human soldiers who do not want apes to become the dominant species.

The volume of exceptional psychically acting performances by actors as apes is extraordinary, some of which are Karin Konoval as ‘Maurice’, Steve Zahn as ‘Bad Ape’, Terry Notary as ‘Rocket’ and Judy Greer as ‘Cornelia’. Newcomer ‘Amiah Miller’ plays a mute war orphan named ‘Nova’ by Maurice (a nod to Linda Melson Harrison’s character in the 1968 original). Amiah gives a delightful performance in a very challenging role; with provokes similar feeling’s to Carrie Henn ‘Newt’ in the James Cameron’s 1986 film, ‘Aliens’.

With Social Commentary as well as Easter eggs and nods to the apes franchise, War of the Planet of the Apes is a must see for any Sci-fi / War film and not be missed. Even Jimi Hendrix ‘Hey Joe’ can be heard in the film.