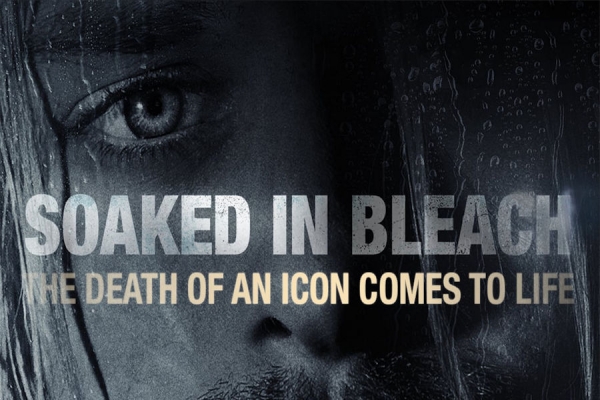 "Just because you’re paranoid, Don’t mean they’re not after you.” Territorial Pissing, Nirvana

We live in a digital age of information and misinformation, of facts and alternative facts. All over the web nestle crazy conspiracy theories - David Icke and his lizard people, that fucking nonsense about Stanley Kubrick and the moon landing. We must be discerning and treat every theory with suspicion.

And this how we must approach Soaked In Bleach – a film about the death of Kurt Cobain. The narrative is the testimony of private eye Tom Grant, hired by Courtney Love to find Kurt Cobain who was found dead five days later. Tom Grant has stated that his whole life has been taken over by this case, and unsurprisingly has a book out on the subject. Likewise the makers of this film have obviously sacrificed a large amount of time and money on it. So naturally they have a vested interest in bigging up the conspiracy angle of the death of Kurt Cobain. But is there anything in it? Let’s investigate.

The film itself is a highly watchable docudrama – a weaving together of dramatized re-enactments, actual audio recordings, archive and talking head interviews. The film is a palatable 90 minutes that whizzes by and stands up to repeated viewing.

The opening shot is water on glass, to set the scene for Seattle, a city that was famous for its rainy weather way before Microsoft, Grunge and Starbucks. Some of the interviews are also conducted against a backdrop of rain-water on glass
.
It all serves to create the atmosphere for what is a classic neo-noir story with many of the archetypal elements. You’ve got Tom Grant the square-jawed private eye, Courtney Love is the alluring femme fatale, and Kurt Cobain as the illusive enigmatic artist.

Susan Scott plays her role as Courtney Love (even though she looks more like Lady Gaga) with aplomb – writhing around on the bed, while chain smoking and talking ten to the dozen. But of course an actress’s interpretation is hardly proof of anything
.
But we don’t just have Tom Grant’s word on Courtney Love’s suspicious behaviour. The film’s trump card are the actual recordings that Tom Grant made during his investigations – his discussions with Courtney Love and Rosemary Carrol – Love’s lawyer. Seven minutes into the film we are hit with the real audio of Tom Grant apparently pulling up Courtney Love from telling a non-truth about finding a letter that Kurt wrote to her in Rome. From that point on you feel sure there is substance to this film.

The title Soaked In Bleach come from the lyrics of Come As You Are – and is the only reference to Nirvana’s music. What with Ms. Love holding the copyright of the entire Nirvana back catalogue there wasn’t much chance of them getting any of it for this film. For an insight into Kurt Cobain as a person and artist you need to go to Montage of Heck.

Of course Broomfield’s excellent documentary Kurt & Courtney covers much of the ground explored by Soaked In Bleach. But Broomfield’s film is more of a character study, not an investigation, and doesn’t mention some of the more persuasive facts of the case that point towards murder.

Which are? Well - the Shotgun evidence – the position of Kurt’s hands and where the shotgun shell was found.

There’s also the clincher – the highly suspicious note that the male nanny Cali De Witt left on the stair of the home in Seattle – one day before the body was found. The note opens with “Kurt - I can’t believe you managed to be in this house without me noticing…”

So the note was trying to imply that while Cali had been staying in the house, Kurt was staying there at the same time hiding away in the green-house. This stretches credibility to screaming point, reflected in Tom’s audio recordings of Rosemary Carroll saying - “I thought Cali wrote it because he knew that Kurt was dead.” – and leading even Courtney Love to comment - “I think he may have heard the gunshot….that’s what my gut instinct tell me.”

Which brings us to the highly suspicious time line. Courtney Love hires Tom Grant on Sunday claiming not to know where her husband is, when phone records show that she had spoken Cali at her home eight times on the phone the day before. Cali had made a police statement that Kurt had shown up at the home in Seattle on Saturday before going away in a cab at 7 am on the Sunday morning.

Soaked in Bleach takes on Nick Broomfield’s Kurt and Courtney head on over the matter of the heroin in his body, which some claim was three times the lethal amount and would have rendered him incapable of shooting himself. In Broomfield’s film, we are shown a slide of a man standing on one leg having taken twice that amount of Heroin. As it turns out this man had only taken a Methadone equivalent and ingested it - not injecting it as Kurt did. The Soaked In Bleach experts are all over this, in the words of Dr. Cyril Wecht - “it’s not the same thing at all, it’s not even like comparing apples and oranges – it’s like peaches and asparagus.”

Being restricted to a ninety minutes running time Soaked in Bleach has to leave out a fair amount of evidence. For instance - someone tried to use Kurt Cobain’s credit card in the days before his body was discovered. The attempts stopped after that. Now that doesn’t prove he was murdered, but it does indicate that someone was with him to take his credit card just before he died, or just after.

The film also omits the testimony of El Duce aka Eldon Hoke, who claimed that Courtney Love offered him money to kill Kurt Cobain. The reason for this quite clear - El Duce talks shit for small change. “Buy me a beer and I’ll tell you some more secrets,” he says to Nick Broomfield in between belches on Kurt & Courtney. El Duce did pass a polygraph, and another witness, record shop owner Karush Sepedjian, backs up his story. El Duce died suddenly just days after speaking to Broomfield. But not only is El Duce not credible as a witness, he’s even less credible as a hired assassin.

Also omitted is the suspicious death of Hole bassist Kristen Pfaff - who was rumoured to be having an affair with Kurt Cobain and planning to leave Courtney Love’s band. This happened two months after Kurt’s death, and it is claimed that when Kristen’s mother found her diary – the pages covering the dates of Kurt’s death had been ripped out.

The film spends a fair few minutes of screen time putting the case that Cobain was not suicidal. But with all the other physical evidence it’s actually a moot point. Kurt Cobain may have had self-destructive tendencies - as many of us do – but that doesn’t mean we should just assume that he committed suicide. As Max Wallace says in the film :-

“If you want to get away with murder you kill a junkie, it’s very easy to make a murder look like an accidental overdose or a suicide. It’s the perfect crime and it happens all the time.”

The fact that is was perfectly plausible that Kurt Cobain would kill himself partly explains why the perpetrators were able to get away with it.

OK - It sounds like I am believing the conspiracy theory, and certainly it’s hard not to be persuaded by the final act of the film which brings out a parade of reputable experts to bring the case home. The afore-mentioned Dr. Cyril Wecht, the well-known pathologist, is always an engaging and powerful speaker on camera. There’s also Homicide specialist Vernon J. Gebereth to point out the irregular corner-cutting policy of the Seattle Police Department at the time - “If it appeared to be a suicide – it’s a suicide. Case closed.”

Cali DeWitt gave a brief statement to police about seeing Kurt on Saturday at the home in Seattle – but was never properly interrogated about supposedly being in the house at the same time that he was killed. He may well may be completely innocent of any involvement in Kurt’s death, but to not to question him fully is unarguably a terrible oversight on the part of Seattle PD
.
Even Norm Stamper – Chief of Police Seattle PD from 1994 to 2000 admits this. In Soaked In Bleach he tells us that he was planning on firing the lead “investigator” on the case for planting evidence in another unrelated case. Norm Stamper concludes that if he was still Chief of Police he would re-open the case.

Kurt Cobain was an amazing talent, He not only sang the songs of Nirvana, he wrote the lyrics, played the guitar, composing most of the guitar parts. His music combined the singalong quality of the Ramones with the emotional power of Joy Division. He brought punk rock to mainstream America. How’s that for an achievement? He is arguably the greatest musician of his era and it is that we should be remembering as his legacy. But sadly that has been blotted out by a great big sign that reads – ROCK’N’ROLL SUICIDE. A “suicide” that was not investigated properly by the Seattle police.

Re-open the case. The truth will set us free.

You can hear a selection of Tom Grant’s audio recordings here :-