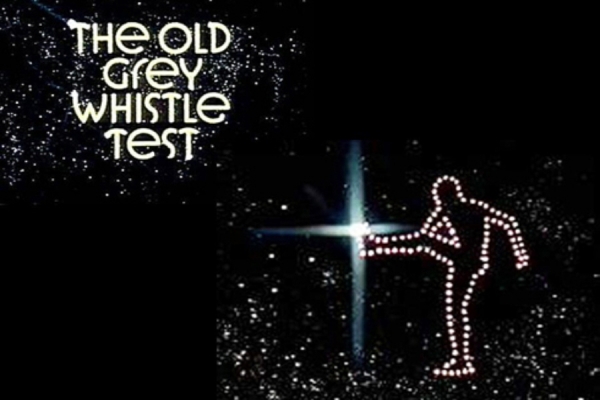 The Old Grey Whistle Test (1971- 1987)
The BBC2 television music show ran from 1971 to 1987. Unlike other contemporary music programs OGWT featured non chart music with a preference for serious rock music and album songs.

Rowan Ayers devised the program and Mike Appleton was the executive producer. The program had shoe string budget and bands performed live in an empty studio (no audience). The studio was only 32x22 feet (approx. 10 x 7 metres) and left little room for a set once the cameras and band were in. Despite this, the OGWT archives which are available on DVD are of immense importance to the social history of rock of that time period. The program was originally presented by Richard Williams (features editor of the Melody Maker); then in 1972, “Whispering” Bob Harris ran things until 1978 when Anna Nightingale took over. In the early 1980s Andy Kershaw, David Hepworth, Mark Ellen and Richard Skinner all took turns as presenters. The theme tune was Stone Fox Chase by Area Code 615 and was played over the opening animation of the 'Star Kicker.' In 1983 the programmed was moved to a live mid-evening slot and retiled Whistle Test. The title credits and music were changed and the final show was broadcast at the end of 1987. The origin of Old Grey Whistle Test is thought to be a 'tin pan alley' phrase used to test reaction to a new record. The office char ladies (some references cite door men) were asked to listen to the new songs and if they could remember it by whistling the tune then the record passed the old grey whistle test.

Top of the Pops (1964 – 2006)
Top of the Pops was made by the BBC and broadcast for the first time on 1st January 1964. Initially there were plans only for a short run but the program proved so popular it ran for 42 years and was closed in 2006. The format featured a dance floor come discotheque type set with a host DJ and regular ‘disc girl’ (Samantha Juste) to spin the discs. The show featured top 20 singles and showcased the best selling artists for that week. It was made in BBCs Studio A in Manchester and the first show was presented by Jimmy Savile other early presenters included Alan ‘Fluff’ Freeman, Pete Murray and David Jacobs Each week there were a couple of new releases played followed by a selection from the top 20 best selling singles with final countdown to the Number One. At first playlists included only songs which had risen in the charts and the same single could not appear on consecutive weeks unless it was at number one. This changed in the mid nineties as the organisers attempted to appeal to the musical tastes of the time. TOTPs reached peak figures in the 70s and attracted an average of 15 million viewers each week. The program went out on a Thursday night (the day the pop singles charts were published), until 1996 when it moved to a Friday night show. Prior to the introduction of music videos, Pan’s People were a troupe of leggie lovelies who filled in when an act was unavailable to appear in person. Whilst there were many changes to the set and presenters over the four decades TOTPs stated more or less in its original form for most of its run. In the 1990s, the show's format was sold to several foreign broadcasters in the form of a franchise package, and at one point various versions of the show were shown in nearly 100 countries. The last show went out at the end of July, 2006. At first all performers mimed to the commercially released record, but in 1966 miming was banned. Although some acts bravely tried to recreate their recorded works after a few disasters permission was given to use a backing tracts provided all the musicians on the track were present in the studio. Johnnie Pearson’s Top of the Pops Orchestra augmented the tracks when necessary. Some well known acts refused to appear on the show because of the live component and eventually in the early 80s pre-recorded backing tracts were accepted. The original theme music was ‘Top of the Pops’ by Dave Davani Four, this was later replaced by CCS’ Whole lotta love. There were three other theme songs; Phil Lynott’s Yellow Pearl (1981 -1986); Paul Hardcastle’s The Wizzard; and Red Hot Pop by Vince Clarke. 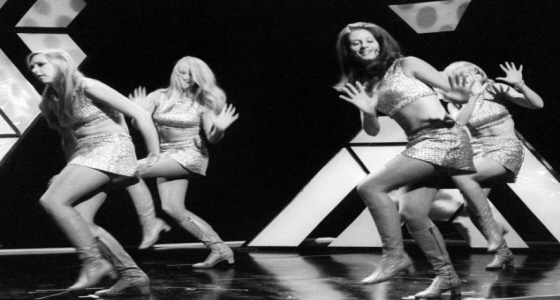 Ready Steady Go ! (1963- 1966)
Following on the success of Juke Box Jury and Thank your lucky stars, Associated-Rediffusion (later Rediffusion) wanted a program which caught the attention of mods in London. Elkan Allan devised Ready Steady Go! Which was a platform for the faces and acts which were popular mainly on the London Club scene. The program was produced by Vicki Wickham and became incredibly influencial and a must for all Mods. RSG! was recorded in small studios at Rediffusion's headquarters in London and had a club atmosphere with guests and audience in close proximity. Paul Gadd (aka Paul Raven and Gary Glitter) was for many years the warm up act and also help with studio security. The show caught the mood brilliantly and went out on Friday with the banner “The weekend starts here!” Keith Fordyce and Cathy McGowan were the main presenters but others occasionally presented. Cathy McGowan became a ‘face’ and Queen Mod but she was originally cast to represent 'a typical teenager.’ To begin with her interviews were erratic and she would often stumble over her lines especially in the presence of charismatic pop stars. However it was most effective and Cathy McGowan became a professional trendsetter. At first the theme tune was “Wipe Out” but the Sufaris but later this was replaced by Manfred Mann’s ‘5-4-3-2-1,’ then at the end of the run by Manfred Mann’s ‘Hubble , bubble, toil and trouble.’ At first guest artists mimed to their records but by late 1964 some performed live and the show switched to all-live performances in April 1965. Artists performed the full version of their songs which was something that had not been previously encouraged. A similar latitude was later taken in BBCs, Old Grey Whistle Test. All the popular acts of the era appeared on RSG! Donovan was promoted as a discovery and UKs answer to Bob Dylan. The show was also responsible for introducing UK viewers to Jimi Hendrix. However like JBJ and TYLS before them, RSG! gained its highest ratings when the Beatles appeared miming their songs It Won't Be Long, You Can't Do That and Can't Buy Me Love. Once the Mod culture began to fade and viewing figures dropped, RSG! was axed in 1966. Despite its popularity in the UK and content it was never shown in the United States. Part of this was due to the program being made in black and white. Dave Clark (DC5) had the foresight to buy the rights to RSG! after the show was cancelled. In the 80s with the flurry of retro, Clark negotiated to have RSG! episodes shown on the US Disney Chanel. Although Clark has never married he was once romantically linked with Cathy McGowan 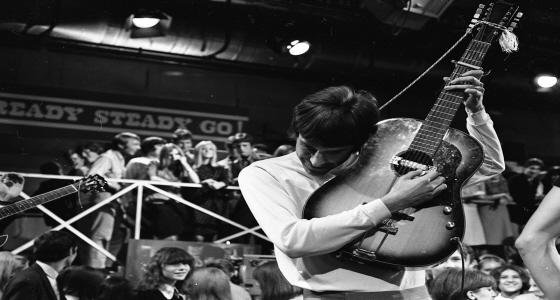 Thank Your Lucky Stars (1961-1966)
Thank your luck stars was commercial television’s answer to 'Juke Box Jury,' and screened in the same Saturday slot. It was made ABC Television, and broadcast on ITV starting in 1961. Phillip Jones was the first producer and had previously made music programs for Granada and Tyne Tees. He was also the Program Controller for Radio Luxembourg before TYLS, and wanted to develop the teenage music program format. The show’s original presenter was Keith Fordyce who later moved on to front 'Ready Steady Go,' thereafter other DJ's appeared with varying degrees of regularity. Amongst these were Jimmy Saville, Pete Murray, Alan Dell, Sam Costa, Barry Alldis, Kent Walton, Jimmy Young and Don Moss. To match Juke Box Jury the producers introduced 'Spin a Disc,' with Dom Moss in the David Jacobs role. Trendy teenagers were chosen to make up the panel of three and comment on the latest releases. They would mark these out of five. When 16 year old Janice Nicholls from Wednesbury, Staffs appeared (along with her beehive Mabel Simpson hairdo) she endeared herself so much to the audience with her broad Black Country accent she was given a permanent slot. Her comment "Oi'll give it foive" became a national catchphrase. Brian Matthew remains the DJ most associated with the program and during his residency at TYLS, had the best UK and US acts of the time. Most acts did one song but occasionally some were allowed to sing both sides of their latest release. The Beatles and the Stones were so popular they were able to perform four numbers. Another show which brought peak viewers (6 million) was a Mersey Sound special which featured The Searchers, Lee Curtis, The Big Three, Kenneth Cope and the Breakaways, Billy J. Kramer and the Dakotas, The Vernon Girls and Gerry and the Pacemakers. The programs were all pre-recorded in front of a live audience with most of the acts miming to their latest hits. This met with much criticism from the Musicians' Union who lobbied long and hard to keep music live. Once the popularity of Beat Groups ebbed the program lost its high viewing figures and was eventually taken of air in 1966. TYLS had two theme tunes; the first was by Peter Jay and the Jaywalkers and the later "Lunar Walk" by Johnny Hawksworth. 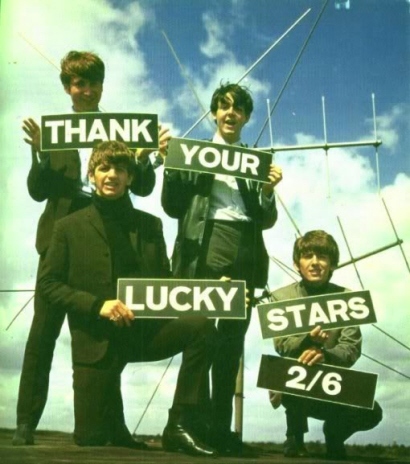