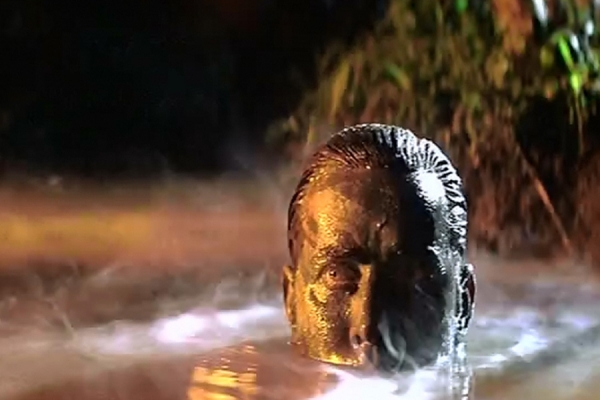 Miraculously, for someone of Sheen’s condition, pre heart attack alone. He returned to the set 5 weeks later looking faster harder better and stronger than ever.

Work had now began on the scenes involving Brando's Colonel Kurtz character deep in the jungle and as if things hadn't been exactly a dance around the maypole for Coppola up to that point this was the moment that the clusterfucks really started to rain down. Before the unpredictable, belligerent and uncooperative Marlon Brando even got a chance to be, well, Brando. There was the chilling discovery that co-producer Gray Frederickson made on the set of Colonel Kurtz’s jungle hideaway. The set where the temple was situated was strewn with garbage with the most foul of smells engulfing it. Frederickson, aghast, demanded that the set be cleaned up. Reminding everyone that it was a health risk and that there would be no question that Brando would put up with filing scenes in what was nothing more than a health hazard. Requesting a meeting with production designer Dean Tavoularis. The co-producer gave him the proverbial rocket up the derriere. ’They’re complaining about you, there are dead rats in there on set.’ Unfazed by this, Frederickson was told ’That’s intentional, it gives the scene real atmosphere.’ At this this moment a staff member from the props department eavesdropping on the conversation chipped in by muttering ‘Wait til he hears about the dead bodies.’ 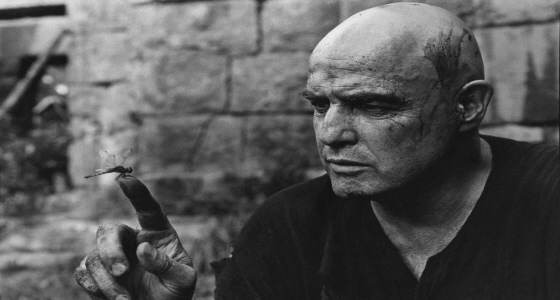 Frederickson had been aware of the rumours of dead bodies being used on set but had discounted them as nothing more than ludicrous on the basis of a major Hollywood production using actual dead bodies for any scenes being something that was obviously on the wrong side of unethical as well as a potential health risk. On over hearing the man from the props department’s comment Frederickson was taken to the props store to see for himself. Inside was rows of cadavers laid out. Struggling to take on board what he was seeing Frederickson exploded. ‘You guys are nuts, where did these come from we got to get rid of these immediately’ In the most concerning and disturbing of ways Tavoularis failed to see the point of all of this and was stood there defending his decision to be using the stiffs. ‘ No, no, they’ll be very authentic, we’re going to have them hanging upside down from the trees!’

The bodies had reportedly came from a “trader” who supplied medical schools with bodies for autopsies. In reality he was eventually caught and convicted by the authorities for being a grave robber. Worse was to follow Coppola and the rest when the man was first caught by the Philippines police. This led to them appearing on the set and confiscating everyones passports .Years later Frederickson was to reveal ‘The police showed up and took all of our passports. They didn’t know we hadn’t killed those people because the bodies were unidentified. I was pretty damn worried for a few days. But they got to the truth and the guy was put in jail’ Later, a truck arrived from the army to round up all of the dead bodies on the set. Due to a dispute over who would actually pay for the burials of the bodies it’s doubtful that they were actually given a decent burial. Frederickson being told by one of the men moving the bodies that they would probably ‘just dump them somewhere else.’ 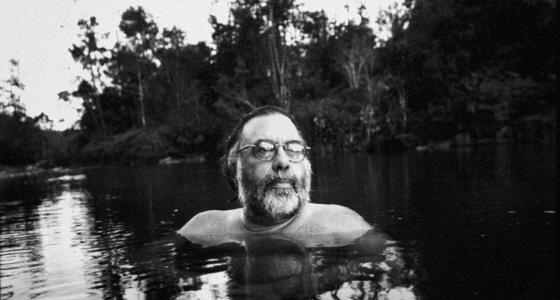 By this point, Coppola had become deranged and twisted. Changing scripts on a daily basis, hiring and firing personnel at the drop of a hat. The last thing he could’ve needed in this state of mind was to take on the very much equally deranged and twisted Dennis Hopper and Marlon Brando. Due to Coppola completely ripping up the ending that had been written, an ending that involved Brando. He had requested a commitment of more than the 3 weeks shooting time agreed with Brando initially. This request was not granted, and he wasn’t done with that. At such a late stage of proceedings, Brando was threatening to pull out all together and keep the already banked million dollar advance. When Brando did eventually appear on set ready to take on the role of Kurtz, everyone’s mind was instantly blown over how large he had become. An easy 300 pounds. ‘You couldn’t see around him’ said Frederickson. On seeing Brando, Coppola went into a tailspin. Out of only two requirements that was asked of him, it didn’t take a go at the hubble telescope to establish that he had broken the losing weight requirement and if anything looked like he’d misread the request and had intentionally PUT weight on. Coppola had envisaged a lean mean fighting machine of a Green Beret in Marlon Brando. Instead he got Homer Simpson from the “King Size Homer” episode where he purposely gains weight to get on disability.

With one of his agreements broken with Coppola, Brando was found out on the other, giving him a clean sweep. He’d neglected to both read the book Heart Of Darkness and read his lines, arriving in the jungle with no formula of the character that he was actually there to play. To be fair, even if he had learned his lines, the chances of Coppola changing them again were at a premium. This habit of the directors was as much of a problem with Brando as it was with the, at the time, an unhinged Dennis Hopper. Coppola and Hopper weren’t without their unintentional comedy moments on set. During an on set argument during filming with Hopper struggling, Francis came up to him and asked him ‘What can I do to help you play this role in the way I need you to?’ to which Hopper replied ’About an ounce of cocaine.’ Request granted, Hopper got his ounce of coke and they went again with the scene! On another occasion, Coppola was found screaming at a vacant looking and intoxicated Hopper over why his spaced out photo journalist character could not remember his lines. The reply coming back from Hopper that he didn’t have any lines to remember, reminding his director that he hadn’t given him any for the scene yet. 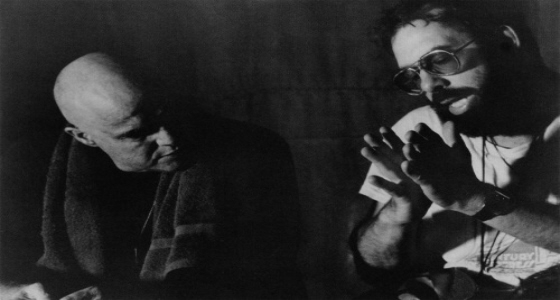 His relationship with Hopper though was practically one of best friends in comparison with Brando. Coppola had fought many battles to make this film. Problems with hiring actors, Presidents with not so much scruples when it came to taking money for helicopters before stealing them back again, typhoons, health problems and so on. His biggest battle of all was saved til last when he locked horns with Brando. With him learning nothing in relation to the project before arriving, Coppola had to start practically from scratch with him. Doing this while the clock was very much ticking with regards to the 3 week commitment Brando had given before coming. Dennis Hopper revealed that Coppola in a fit of rage shut down all production for a week while Coppola read Brando the script out loud. Around 900 cast and crew just hanging around for the week while this took place. Brando started to disagree with his lines, shaved his hair off suddenly and countered Coppola’s pre written lines with the idea of him improvising his scenes. He was also requesting that he be filmed dressed in black and be shown mostly in shadow. Due to the sheer size that Brando had become, Coppola was more than happy to accommodate, Brando no longer fitting his vision for what Colonel Kurtz looked like in any case. Due to how much of a drugs and drink train wreck of a life Dennis Hopper was living, Brando then refused to be filmed with him. Their scenes together having to be shot on alternate nights. This wasn’t what Coppola had planned but with time almost up on Brando’s 3 weeks and him refusing to shoot, even one more extra day, Coppola was backed into a corner. By then and at breaking point he was heard saying that the film was a $20 million disaster and why wasn’t anyone believing him when he said it.

Coppola had to endure a Brando in mumbling and rambling mode. Filming, hoping that something would eventually come out of Brando’s mouth to give the film some sort of an ending to make all the days spent in the Philippines, all the blood sweat and tears somehow worth it. In a show of why Coppola had even entertained putting up with so much shit from Brando and had chased him so hard to play the role. Brando, almost out of the blue with the cameras still rolling, delivered one of the most iconic and famous speeches committed to celluloid. The moment Coppola heard it he knew the film had it’s ending right there. Completely nothing in terms of how he had imagined the film actually ending but by then he was a broken man and was operating under the knowledge that once more United Artists were pressuring him over how much behind schedule and over budget the project had become. The madness could stop, they could all finally go home. 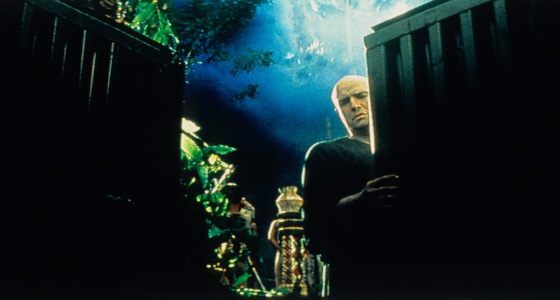 Out of the extreme conditions, from the insanity, danger and craziness of the Philippines jungles came a timeless cinematic masterpiece. Spaced out actors ditching their lines in favour of improvisation and ripping it up on screen with quotes that are still used today over thirty years later. A film that, based on a life changing journey that Captain Willard takes started to mirror what was happening to the cast and crew as the months passed. A production, that due to the length of time it was taking to make, had been called “Apocalypse When” & “Apocalypse Forever” by well known Hollywood critics. During the time in the Phillipines, principle photography took 247 days to complete. To offer some sort of perspective on this figure. Peter Jackson’s behemoth of a Lord Of The Rings trilogy was completed in slightly less days! No longer Apocalypse When or Forever, it finally was Apocalypse NOW. 153 minutes of what is still looked on as not only one of the most important Vietnam films ever made but one of the greatest war films of all time. Opening on 19th August 1979 the movie went on to win 3 Golden Globes, 2 Academy Awards and the coveted Cannes Festival’s Palme D’or. Taking almost $80 million at the box office.

Sitting in front of the worlds press at Cannes when he told onlookers that his film wasn’t about Vietnam and in fact WAS Vietnam Coppola had the look of someone who had been to the edge and back again. A man who had found himself questioning his sanity and listening to suicidal thoughts through the making of this film. A director, driven by passion and tenacious determination mixed with a touch of vanity and egotism. Who despite all of the madness that he was surrounded by had managed to make this film, almost in spite of everything he’d had to contend with. He wasn’t to know it sat there at the time but Apocalypse Now was to prove to be his final big budget box office hit as a director. The question of the ordeal he went through in the making of Apocalypse was raised over his career taking a major dip following timeless productions such as both Godfathers 1 & 2 followed by Apocalypse Now. The question over just what happened to Coppola during the 18 month shoot in the jungle was asked and just how much it had scarred him. There must be reason that such an edgy unique director who could be spoken about in the same company as your Kubrick’s and your Ferrara’s could release such a film as Peggy Sue Got Married?