A Heart Hidden in Gold


© Words  Staff Writer
Do you believe in second chances? Jason Rock has been climbing metaphorical mountains since a young age. Anyone who has lived and made mistakes can admire the journey of Jason Rock. This is about second chances. He could have hung up his cleats. But redemption comes in many forms, and he was man enough to face his blunders head on, he has been a powerful force of good the past few years. He's actively campaigned for helping young people fight their demons and he has inspired  younger British children with his work ethic. Nothing, not even the weight of the British Empire, was going to stop this man.

We can all confess to being naughty kids, but Jason Rock's childhood is crazy enough to write a Hollywood film about he is a man whose personal life is littered with odd incidents and tragedy. Now at the age of 26, Jason is on the rise to prominence with an inspirational tone as he combines acting, boxing and being a motivational speaker. 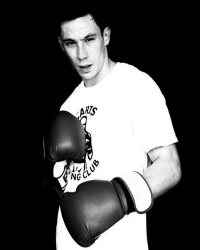 People who know Jason could not be more proud of the terrific human being he has become. Jason has rebounded from the serious mistakes he made to become a man of strong moral character. Jason goes to lots of schools and talks to lots of kids and he's doing what he can to stop them making the very serious mistakes he did. I think he has walked the talk and earned his opportunity. Jason is someone who has really grown as a person the last few years. Jason entered the care system following a childhood derailed by addiction and trauma. At the age of fifteen Jason was banned from London for 5 years. He lost his best friend in a high speed car accident and went through the criminal justice system. He managed to bounce back from a life of care, addiction and surgery.

Jason is now one of the Country's top  inspirational speakers, and on the books of Parliament Speakers alongside the likes of, Sir Steve Redgrave and Jamie Oliver. Jason has spoken to over 35,000 children and talks to them about gangs and his story. He has worked with the Metropolitan Police, corporate sector and key organisations that motivate young people away from crime and addiction. He is a passionate advocate for young people. Jason truly believes young people need to be helped before they enter the justice system, knowing once they enter it they're 'labelled for life'. He has an indomitable spirit, and has single handedly tamed his own wild heart.

Jason also acts as a facilitator at Only Connect, who helped to develop his potential. He is an ambassador for The Big House Theatre which supports care leavers in London working alongside actresses Kathy Burke and Maggie Norris. He is regarded as a promising actor and one of the most talented young speakers in the country. His passion is to help care leavers and inspire children not to make mistakes by listening and finding the right mindset for success.

Jason can't change how his life started, but what he has now is the chance to write his own happy ever after.