A Nod from God – Maradona 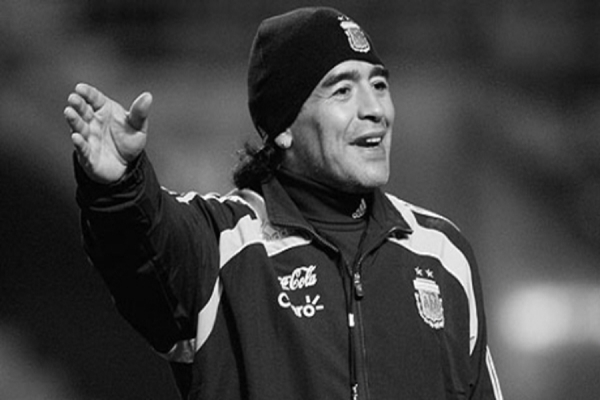 So the World Cup is about to start and Diego Maradona is once again back in the spotlight. His Argentina side are brimming with world class players most notably in the striker department with FIFA footballer of the year Lionel Messi, Carlos Tevez, Higuain, not forgetting Liverpool's Mascherano but even that's not enough for some of the Argentina nation who are dismissive of their chances at this year's extravaganza.
Why you ask, can a team with world class players and a legend for a coach be so short of support in their own country's eyes..Step up one Diego Armando Maradona the 49 year old, 5ft 4inch destroyer of many a club and country in his time on the green baize that is a football pitch.
Lest we forget about his off the field problems with drugs and his infamous on the field exploits with his hand against England at the '86 World Cup.
He was an immense footballer for his size and stature

Maradona these days courts controversy wherever he goes, whether it be taking pot shots at journalists with his pop gun, or his outspoken manner and nonchalant behaviour.

Its more akin to Alex Higgins managing Northern Ireland, than coaching one of the world's most flamboyant international teams.

Juan Riquelme is a top notch midfield player who refused to play for Argentina since Maradona took the job on in 2008 stating that he and Diego cannot work together.

So with player unrest and supporter nervousness can Argentina go the whole way and win the famous trophy.. the doubters say no.. but I say YES.

What better way for Maradona to be reviled in his native Argentina than mastering the greatest surprise of all.

For starters all his squad in South Africa can have sex on non match days.. so they are all gonna be happy bunnies, can you see Signor Capello agreeing to the same with England.. I think not.

He's under no real pressure to win anything as the majority of football fans think he will ruin Argentina's chances with his unpredictable management style.

Although they didn't look convincing in qualification.. in fact they were pretty shabby, but when the main event starts, they will be more than ready for any team, that's the Argentina way.

Looking at the imaginary first X1, it's fairly experienced with not only the fab three in attack but Samuel in the middle, Mascherano behind him and Heinze and Demichelis at the back

Spain and Brazil may well be the bookies favourites. But I would love to see Diego "Armando" Maradona and squad go forward from that hand of God in '86', to a nod from God in 2010.