Ian McLagan was a keyboard player best known as a member of the Small Faces and Faces.  He sadly died on December 3rd following complications from a stroke.


Known to most people as Mac, he moved to Austen, Texas in 1994 where he made it his home.  He became a well loved local figure, performing regular sessions in two local bars, The Lucky Lounge and Saxon Pub.  During his music career spanning almost 50 years, he collaborated with many music artists during that time, including the Rolling Stones and in more recent years he led his own band called Bump Band.  Mac was constantly touring and performing, and was due to go on tour with Nick Lowe when he died. 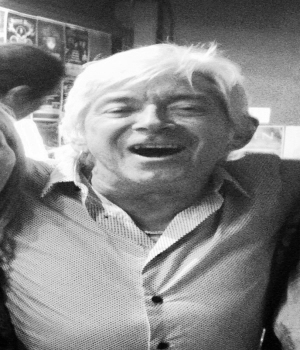 Mac often returned to the UK and was here in July where I was fortunate enough to catch up with him after nearly 48 years.   I worked with Mac back in 1966 after he joined the Small Faces at the end of 1965.  However, it turns out our first encounters were not harmonious.

I am the receptionist at Don Arden’s office that Mac wrote about in his book “All The Rage” and the incident was also included as part of his story telling during his live act when Mac describes what happened when he was invited to join the Small Faces.   He explains in his book how I was not particularly friendly towards him.

“Since my last visit, the receptionist, who’d just been uninterested in me before, had turned unmistakably cold.  There was a reason for her hostility, as I soon found out.  It was her boyfriend I was going to replace in the band.”

I had been alerted to what Mac had written when I reconnected with Small Faces fans via the internet around 2006.    People kept asking me if I was the receptionist Mac refers to.  Intrigued by this, I read a copy of the book.  Even though the incident of our meeting is recorded early on in the book (pages 52-54) I found Mac’s book so enthralling I couldn’t put it down and found myself reading it right to the end.  I wasn’t the only one to find his book an enjoyable read.  It was described as one of the best music books in years.

In defence of my behaviour back then I can only say I was just 16 and very immature. I had also been a huge Small Faces fan and remember Jimmy was devastated at being chucked out of the band so soon after they had become famous.  I guess I thought I was just being loyal to him, even though, as Mac says in his book, it wasn’t his fault he was asked to join the band.   My relationship with Jimmy was brief and in time of course I came to accept Mac as one of the line up equal to Ronnie, Kenney and Steve.

I did write to Mac after reading his book and apologised for my bad behaviour back then and this year we finally had a chance to meet up when he came over to the UK in July to promote his new album “America” .  On this visit he was accompanied by his bass guitarist and Bump Band member Jon Notarthomas.

I went to see them perform at the Half Moon Putney and took along my best friend Pauline Corcoran, the original Small Faces fan club secretary.  Earlier this year we had set up an Official Small Faces Fan Club page on Facebook endorsed by both Mac and Kenney Jones.  We had been helping to promote Mac’s concert before he came over.

After the show at the Half Moon in-between Mac signing loads of autographs and posing happily for photos with fans, we spent several hours with Mac and John chatting and laughing.   Even though we had made our peace, I had hoped that he wouldn’t stop telling the story of our first encounter, as it was part of what happened back then.  As well as being an amazing musician, he was such a gifted story teller.

When I got the news of Mac’s death it came as a huge blow for me as I was hoping we could’ve built on our new found friendship and make up for lost years.   There has been such an outpouring of grief that I’ve not seen before.  He was truly loved and admired by so many, especially myself.  I just really hope he knew that.