The Trogglodytes formed in 1964 in Andover, Southern England. They shortened their name to Troggs when they signed for Larry Page in 1965. The original line up was Reg Ball (now Presley) on lead vocals, Chris Britton (Lead Guitar), Pete Staples (bass), Ronnie Bond (drums). Despite being signed to Page One Records their manager leased them to CBS for debut single "Lost Girl." The single failed to impact.


Their second release was Wild Thing written by Chip Taylor (aka singer song writer James Wesley Voight). The song was previously recorded in the US by The Wild Ones. Larry Page heard it when he was in America and wanted the Troggs to record it. The Troggs version was recorded in mono in one piece on the second take at Olympic Studios, by engineer Keith Grant. At the same session the With A Girl Like You was also recorded. Wild Thing got to #2 in the UK; and topped the US charts, selling over 1 million copies. In the US due to a distribution dispute, the single was available on two competing labels: Atco and Fontana. Billboard combined the sales for both releases, making it the only single to simultaneously reach #1 for two companies.

In the UK the band were promoted as a ‘bubblegum group’ to appeal to a young teenage demographic. On stage they appeared in Carnaby Street cut, candy striped suits and much was made of their yokel accents. 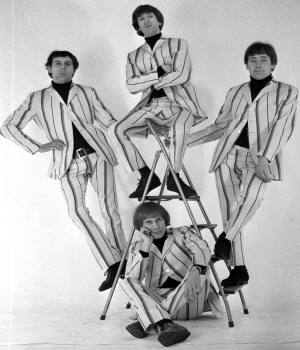 Their follow up single ‘With a Girl Like You,’ again sold over one million copies and rocketed to number one in the UK charts. It just made the US Top Thirty. The third single in 1966 was "I Can't Control Myself" contained suggestive lyrics which meant airplay was restricted but despite this the song still reached Number 2 in the UK singles charts. 1966 closed well for the band with another Chip Taylor composition, ‘Anyway that you want me.’

The band were unable to tour the US until 1967 (with the Who and Herman’s Hermits) but by this time interest in the quaint English group that talked funny was minimal. Back in the UK the Troggs continued to have hits with ‘Give it to me’ which was a Reg Presley composition and another, "Love Is All Around" in 1968 scored well in both the UK and the US. The latter sold over one million copies.

Music tastes were changing and The Troggs remained a bubblegum group preferring ballads to psychedelia and by 1970, they were struggling. The band broke up to follow solo projects but when nothing came of these they reformed with a new line-up change. Pete Staples replaced with Tony Murray (bass) and the Troggs continued to perform and record. In 1991, they recorded Athens Andover, with three members of R.E.M., and had other collaborations but none were particularly successful. The band's original drummer, Ronnie Bond, died in 1992. Dave Wright, another founding member, died on 10 October 2008. The Troggs were widely regarded as inspiration for other garage rock and punk rock bands. An image enhanced immensely by the Troggs Tapes, a 12-minute studio argument captured on tape while the band were warming up in the studio. Bands like the Ramones, MC5 and Iggy Pop all cite the Troggs as their early heroes and the Dwarves included some of the dialogue from the Troggs Tapes on their cover version of “Strange Movies.” It has been suggested the group’s infighting was an inspiration for a scene in the comedy film ‘This Is Spinal Tap’ .

In 1994 ,“Love is all around” sang by Wet Wet Wet became a massive hit in the US and UK after it appeared in the movie, ‘Four Weddings and a Funeral.’ Reg Preslay was diagnosed with lung cancer and died in 2013.