A Short History of Sparks


Ron Mael was born 1949 and his brother Russell in 1951. They grew up in LA and their parents put them to stage school. Later the teenagers went to UCLA to study film, graphics and English. By 1968 the Mael brothers along with John Mendelson (drummer) and Earle Mankey (guitar) formed the band Halfnelson.


Ron played piano and organ and Russell sang. They preferred the music of the Who and Pink Floyd to the then popular folk music genre of LA. This made them an alternative band and they gigged for a couple of years. Their self penned songs usually reflected movies which again made them quite unique in Tinsel Town. Todd Rundgren was producing for Bearsville record label and signed them replacing John Mendelson with Harley Feinstein and adding bass player James Mankey (Earle’s brother). Their early releases sold badly despite a change of name to Sparks (a play on Marx Brothers). The group soon moved to Warner Brothers and in 1972 released their second album, A Woofer in Tweeter's Clothing. Although sales were continued to be poor the group began to build a strong fan base. Their creative sound and stage presence with Russell’s slick back hair and tooth brush moustache contrasted with castrato, pretty boy, Ron on vocals was magnetic. A Sparks gig was an ‘experience’ to watch and as the group toured the UK they soon attained a cult status. Sparks signed for Island Records and under new management released a Ron Mael composition ‘This town ain’t big enough for the both of us’ in 1974. It went straight to Number 2 in the UK singles charts. 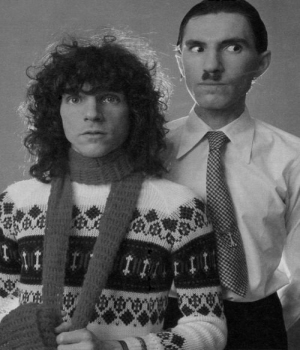 When Punk was at its height Sparks returned to LA to play more West Coast sound which can be heard in "Over the Summer", "I Bought the Mississippi River," "Those Mysteries," and "Occupation." The brothers were generally dissatisfied with the results and felt their music lacked personality. Keen to keep abreast of changing genres Ron and Russell began working as a duo with Giorgio Moroder and together they produced the album ‘Number One in Heaven.’ This album is regarded by many as a landmark in the development of electronic music. The single sold well. By the late 80s, Sparks were back in the studio with a more traditional line-up. Terminal Jive, scored a massive hit single in France, "When I'm With You". The Maels relocated to France for a year to promote their music. The brothers then took a sabbatical from music spending more time on personal projects before regrouping in 1994 with the release of the techno dance inspired ‘Gratuitous Sax & Senseless Violins.’ The Singles from the album "When Do I Get to Sing My Way?" and "When I Kiss You (I Hear Charlie Parker Playing)" were instant hits. In 1997, they recorded two new versions of ‘This town ain’t big enough for the both of us’. The first was an orchestral reworking produced by Tony Visconti which reinstated a verse Muff Winwood had original cut from the original. The other was for their album Plagiarism as collaboration with Faith No More. This was released as a single and reached number forty in the British singles chart. Sparks were like (David) Bowie could transcend to other musical genres effortlessly influencing many younger musicians on the way. Up until the present day the brothers continue to metamorphose maintaining their interest in contemporary music.