Charles Hardin Holley was born in 1936 in Lubbock, Texas. The youngest of four children, Buddy grew up in a modest environment. The Holleys were a musical family and Buddy started the piano when he was 11 years of age. After nine months of lessons he went onto the guitar and violin. Buddy met Bob Montgomery when he was thirteen. at Hutchinson Junior High School and they teamed up as the duo, "Buddy and Bob".


The boys sang harmony duets at local clubs and high school talent shows. Later Buddy sang in the Lubbock High School Choir. When Elvis Presley played in Lubbock (1955), Buddy saw him sing and was convinced this was the career for him. A few months later Buddy appeared on the same bill with Presley, when he returned to play on Lubbock. Not long after Buddy’s group opened for Bill Haley & His Comets at a local rock show. Decca Records snapped him up and there was an error in the contract. The lawyers had misspelt Holley. Buddy was too embarrassed to ask them to change it and so became Buddy Holly in 1956. Among the tracks recorded for Decca was an early version of "That'll Be The Day", which took its title from a phrase that John Wayne's character said repeatedly in the 1956 film, The Searchers. 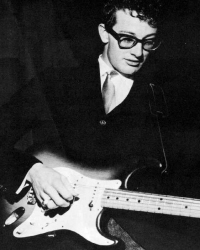 Buddy formed his own band, The Crickets, (Jerry Allison (drums), Joe Mauldin (bass), and Niki Sullivan (guitar)), and they began making records at Norman Petty's studios in Clovis, New Mexico. Petty was shrewd businessman and always insisted in sharing the writing credits even when his contribution was minimal. This assured him greater share of the royalties. Coral Records was a subsidiary of Decca and signed Buddy Holly and The Crickets which meant Buddy was in the unusual position of having two record contracts at the same time. “That’ll be the day” when it was released in 1957 hit the top of the charts. Buddy’s songs had more sophisticated lyrics and complex harmonies than other song around at the time. Many of his early works featured a unique vocal "hiccup" technique. The clipped "uh" sound was used to emphasize certain words in his up tempo songs. "Rave On" and "That'll Be the Day" are two good examples. Buddy and the Crickets appeal was a combination of intelligent lyrics and innovative style which included sophisticated orchestration. They were more youthful than the country and western stars of his day, and their music had mass appeal cross the races. In March 1958, he and the Crickets toured the United Kingdom and later the same year he married Maria Elena Santiago. The group continued their success with songs such as “Oh Boy” and “Peggy Sue, ” but Buddy was growing restless. A dispute concerning royalty money caused acrimony and Buddy split from the Crickets and Norman Petty and began a solo tour with other notable performers. In a Mid Winter tour Buddy was playing with Ritchie Valens and J.P. Richardson, "The Big Bopper."

On February 2, 1959 the tour were in Clear Lake, Iowa and Buddy Holly chartered a Beechcraft Bonanza to take him and his new Crickets band (Tommy Allsup, Carl Bunch and Waylon Jennings) to Fargo, North Dakota. Carl Bunch did not take the flight as he was hospitalized for frostbite three days earlier. J.P. Richardson, "The Big Bopper" came down with the flu and didn't feel comfortable on the bus, so Jennings gave his plane seat to him. Ritchie Valens had never flown on a small plane and requested Allsup's seat. They flipped a coin, Valens called heads and won the toss. The four-passenger Beechcraft Bonanza took off into a blinding snow storm and crashed into Albert Juhl's corn field several miles after takeoff at 1:05 A.M. The crash killed Holly, Valens, Richardson, and the 21-year-old pilot, Roger Peterson, leaving Maria Elena Holly, a widow (she miscarried soon after). Universally the event was called “the day the music died.” Buddy Holly was 21 and had only been recording for two years. During the course of his short career he had written and performed the most progressive music of his time. Laying the musical foundation for groups like the Beatles, the Rolling Stones and countless other musicians to come.