“The Lies, The Truth and The Pain” Nick Drake’s home tapes

Turn the clock back forty years, and one would probably find 26-year-old singer-songwriter Nick Drake alone in his bedroom in the leafy, chocolate-box environs of Tanworth-in-Arden, Warwickshire. Deflated, defeated, dented and depressed – Nick’s energy for life had evaporated in a fog of sadness and unfulfilled ambition – the prevailing morbidity dulled only by strong tranquillisers.


Victim to the fickle and vacuous machinations of the music industry during the first half of the 1970s, Drake stood no real chance of immediate success. Compounding issues, his refusal to engage in any publicity would only serve to remove him even further from any possibly receptive spotlight. Remember this was 1974, a world barely invaded by multi media. With just one music radio station, and only three TV channels, the gulf of home-grown music was hardly given any coverage. Nick’s beautifully crafted songs needed more than just an ambient response from the artist to hit any sort of mark. 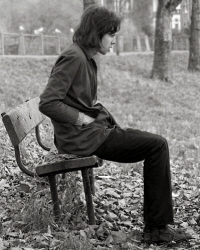 Nick’s death in November 1974 robbed the world of one its greatest talents, denying the world any advance on the three glorious albums that he’d put together. Compilations’ of Drake’s work barely filling the demand for new material, fans desperate to wallow in the residual energy left by Nick’s brief tenure on earth, would travel up to Tanworth-in-Arden to engage in the landscape that inspired much his output. The more intrepid of these admirers would beat a path to Nick’s family home at Far Leys in Bates Lane – a few hundred metres from the centre of the village.

While still devastated by their talented son’s untimely death, Nick’s parents Rodney and Molly would nonetheless be charmed by the devotion of these fans. Following tea and warm recollections, the couple would play some of Nick’s home recordings – captured on a reel to reel recorder and left behind in his bedroom following his death. For those smitten with the rarity of these intensely private moments, Rodney Drake would often hand over a cassette copy of some of the music for future listening. Contained in the cassettes were often rudimentary compositions, while others were work in progress. While the quality at times was challenging, they were nonetheless veritably gold dust to the aficionado.

The Drake fan network small but rabidly intertwined, these tapes would be copied and shared throughout the community. Predictably, in time they would be leaked onto the bootleg circuit – often commanding huge prices. Soon, a cottage industry exploiting the private world of Nick Drake was operating, unofficial and unauthorised by Drake’s family and estate.

Nonetheless, these private moments eavesdrop into the world of the singer-songwriter, composing, structuring and occasionally fluffing, but all a component part of the novice composer – no one least the artist thinking that they’d escape from their bedroom environment.

Some of these rudimentary tapes would contain versions of tracks that would find space later on Drake’s three Island albums. Others would remain purely at raw demo stage – some tantalisingly hinting at what they could have been if Nick had brought them through to release.

Deep in this modest library lies the most enigmatic artefact, a piece that would fill in the blanks as to the inner psyche of Nick Drake more than any photograph or second-hand description could ever do. Recorded on the reel-to reel tape at dawn following a party, a slightly drunk (stoned?) Nick would relay the view from his window overlooking the Warwickshire countryside. His voice, gentle, erudite and warm – betrays nothing of the depression that would later claim him, revealing more of a young man spilling a tired stream of conscious thoughts before falling into bed. 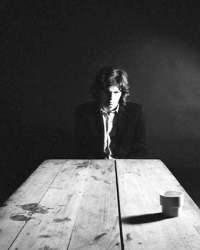 Dating this tape is hard to achieve, but from the effervescence of its tone, it is likely to have been recorded well before his fall into dark melancholy. Nonetheless, there are tinges of sadness here – the reference to “The lies, the truth and the pain” pointing at darker elements inside his head, but elsewhere there are a few chuckles and smiles apparent – redrawing the portrait of a man popularly associated with sadness.

If truth be told, private dialogue like this is a reality that anyone with access to magnetic tape performs at least once in a lifetime, but this is Nick Drake – poet of our generation – and its relevance to his legacy is invaluable.

Good evening, or shall I say good morning? The time is twenty-five to five, and I've been sitting here for some time now, actually. I’d been to  a party which I quite enjoyed... it's a bit... one has one's reservations. One has quite enjoyed oneself, but one has great reservations, because the people weren't particularly interesting. In fact there weren't as many people there as I'd expected there to be, because I thought, you know, the Maynard-Mitchells have a big big do. in fact there weren't nearly as many as I might have thought, which was a pity.
In fact I think I must have drunk rather a lot, although it didn't seem so at the time; I thought myself quite sober. When I leapt into the car to drive home, after my merry abandon, I found the task extremely difficult, and it was extremely fortunate that there was nothing else on the road because looking back on it, I seem to remember I had a mental brainstorm and I didn't realise at the time, but I think I drove the whole way home on the right hand side of the road. This is something of course which comes from driving in France too much - which is what I've been doing recently, as you probably know, driving in France (you know). I mean in moments of stress such as was this journey home, what one forgets so easily the lies, the truth and the pain. So I'm wavering from the point.
What I was trying to say is, um, that while I sat here I had an extremely pleasant time on the piano, actually, I was playing the piano and sort of singing and I rather fear I might have kept people awake upstairs, but one hopes not - but it was pleasant, and it's extremely pleasant sitting here now because I think there's something  extraordinarily nice about seeing the dawn up before one goes to bed, because there's something uncanny about it, when it suddenly becomes light... because one connects darkness with going to bed, surely, and when one is still up when it becomes light, when it's a new day, and you still haven't gone to sleep, because the night equals sleep, so easily, and when one is still up when the new day begins it is something of a cheering experience I always find. I can look out the window now and that tree over there is green, whereas before one goes to bed, just as one goes to bed, that tree should be black, surely; everything should be black before one goes to bed, that is surely the essence of the romantic.
Anyway I think I'm straying from the point. I shall probably stop talking here, because if I don't I shall start soon relating the life histories of things, which will be frightfully tedious. So it's here that I'll sort of say good night to you now. Good night. (laughs)